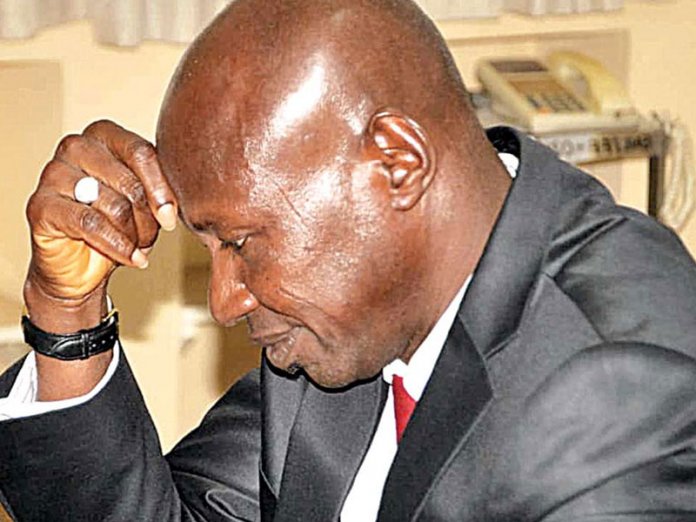 The counsel to the suspended Chairman of the Economic and Financial Crime Commission (EFCC), Mr. Ibrahim Magu, has accused the Ayo Salami-led Presidential Panel of inviting witnesses despite the conclusion of his defence.

Magu’s lawyer, Mr. Wahab Shittu, said despite his client’s closure of his defence about six weeks ago, the panel has continued to invite witnesses behind his client.

Magu, who is currently being investigated by the panel over allegations of graft and insubordination, closed his defence before the panel recently

He had through his lawyer written series of letters accusing the investigative panel of preventing him from calling a witness to strengthen his case, as well as subpoenaing certain individuals for his defence.

The Premium Times quoted Shittu as saying in a statement issued yesterday that the reports reaching them showed that the panel has continued to invite witnesses, about six weeks after they closed their defence.

He said, “We understand from reports reaching us that the panel has continued to invite witnesses, about six weeks after our client has closed his defence.

“The invitation of witnesses (who have cases to answer and those who are being prosecuted by the EFCC) to testify behind my client and the verification of assets in his absence are patently illegal and offend the principle of fair hearing.

Citing Section 207(2) of the CPA, Shittu said, “The accused shall be present at the view.”

“The accused must be present at the locus. If an inspection of the locus is undertaken and the accused person is absent, this is an irregularity. If the accused suffered miscarriage of justice as a result of this irregularity, an appeal court will set aside a conviction…” see identical provisions contained in CPC, Section 243 and proviso (ii) to Evidence Act Section 76.

Shittu also accused Salami of inviting officials of the commission on the pretext that Magu, under his watch, interfered with the functions of the Nigeria Financial Intelligence Unit (NFIU).

The lawyer explained that his client had only set up the Anti-Money Laundering and Countering the Financing the Terrorism (AML/CFT) Unit, responsible for intelligence gathering – to solve the allegations that the EFCC engages suspects without prior intelligence which affects and hampers proper investigation of cases.

He said, “We are also raising serious objection to the panel’s desire to ask questions from the EFCC officials on the pretext that the EFCC under the watch of our client is usurping the functions of the Nigeria Financial Intelligence Unit (NFIU).

“We wish to state for the records that the setting up of anti-money laundering and countering the Financing the Terrorism (AML/CFT) Unit by our client is to aid the work of the commission and not to usurp the functions of any agency.

“What the Egmont group frowns about are suspicious transactions which are the exclusive reserve of the NFIU to collect. It is therefore misplaced to say that a law enforcement agency like the EFCC, having the sole mandate to investigate and prosecute money laundering and terrorist financing should not have access to financial information of suspects. We submit that anything to the contrary will only be diminishing the operations of the EFCC.

“We wish to state that the setting up the AML/CFT Unit is one of the strategies that Magu has put in place to enhance the operations of the EFCC,” Shittu said.

The NFIU collects information on suspicious or unusual financial activity from the financial industry and other entities suspected of being money laundering or terrorism financing. Such information is then shared with relevant anti-crime or regulatory agencies.

The Egmont Group, an informal network of 156 financial intelligence units (FIUs), had in June 2017, suspended Nigeria due to the alleged inability of the country to grant autonomy to the NFIU.

Due to the suspension, President Muhammadu Buhari, in 2018, signed the Executive Order 6, making the NFIU domiciled “in the Central Bank of Nigeria (CBN), “but will remain autonomous and Independent”.

Part of the allegations levelled against Magu by his accuser, the Attorney-General of the Federation (AGF), Mr. Abubakar Malami, however, involves the expulsion of the Egmont group.

The AGF in 2017 had alleged that the “EFCC leadership has manipulated and misused intelligence to the detriment of the fight against corruption and financial crime in Nigeria.”

“The threat of expulsion from the Egmont Group calls for a thorough review of the NFIU. To achieve the desired goal, NFIU needs to stand alone as an agency with full complements of power to recruit its staff and an annual budgetary allocation guaranteed for its operations,” Malami reportedly said.