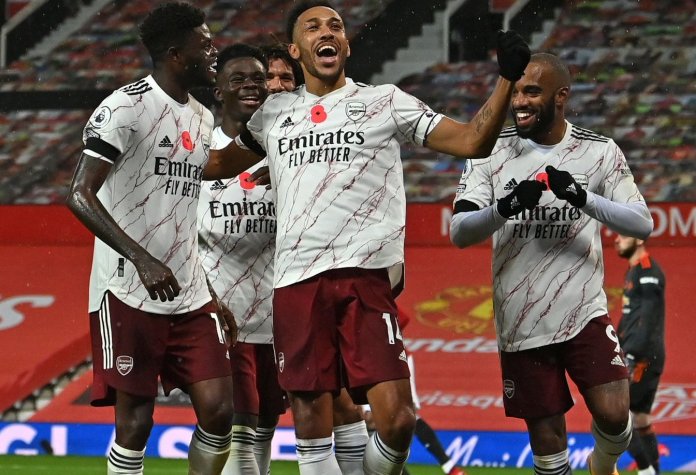 Nigerian internationals had miserable outings for their various clubs in Europe at the weekend with the defeat of Odion Ighalo’s Manchester United at Old Trafford by Arsenal the highlight of the poor performances.

Gabonese Aubameyang ended a run of five games without a goal by sending David de Gea the wrong way on 69th minutes after Paul Pogba had fouled Hector Bellerin in the box.

The Gunners now have 12 points and are up to eighth while United remain in 15th on seven points.

It was another miserable outing for Alex Iwobi and his Everton teammates who suffered a 1-2 loss at St. James’ Park against Newcastle United.

Iwobi featured in the last 15 minutes of Everton’s second defeat of the domestic league season.

Elsewhere in the Italian Serie A, Victor Osimhen fired blanks as Napoli suffered a 0-2 home defeat in Naples to Sassuolo.

Although Osimhen was denied a penalty that would have leveled scores and perhaps change the game, the visitors went ahead to grab the second vital goal that sealed any hope of a fightback from Gennaro Gattuso’s men.

That defeat has now pulled Napoli one step back to No 5, while winners Sassuolo are now second on the Serie A log with Juventus that defeated Spezia 4-1 in third place.

In late Saturday night fixture between Nantes and PSG in the French Ligue 1, Eagles winger, Moses Simon had to be substituted after just 25 minutes due to a groin injury in the game the former lost to the capital city team.

Omeruo limped out of the pitch three minutes after the break and was replaced by Roberto Rosales. Jose Arnaiz netted the winning goal for the home team in the 49th minute.