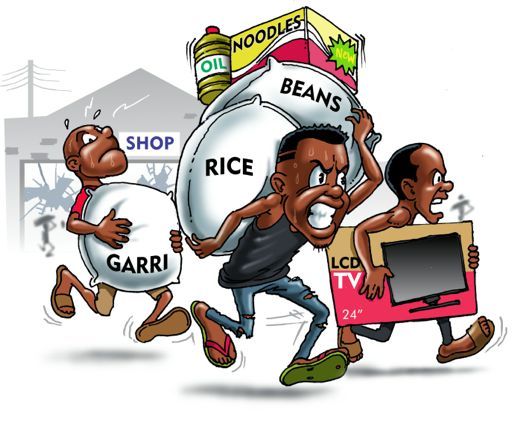 The authorities must do more to brighten the economic conditions

For a period of 10 days, thugs and hoodlums, cashing in on the near absence of the police on the streets of major cities across the country seized, vandalised or stole whatever was available from business premises, public buildings, homes, shopping malls, banks and warehouses. From Lagos to Calabar to Ilorin to Jos and Yola, the looting was uncontrollable and anarchic. In Edo State where it all started, the governor was forced to impose a 24-hour curfew as some hoodlums forcibly opened two prison gates for inmates to flee. In a daring raid in Ilorin, Kwara State capital, a soldier had no choice but to ask the invading crowd to “go peacefully and come out peacefully.”

However, there was also targeted looting of COVID-19 palliative materials that could be described as a demonstration of anger by the people over the perceived hoarding of food items that ought to have been shared during the lockdowns. The explanation by the governors through the Nigeria Governors’ Forum (NGF) that the food items were stored in anticipation of the second wave of the Covid-19 pandemic has been met with scepticism. But from statement by business persons and corporate organisations, under the umbrella of Coalition Against COVID-19 (CACOVID), the problem may not be that of the governors. According to CACOVID, the delay in the distribution was to ensure a transparent distribution processes as well as tracking to ensure that the palliatives get to the end users.

Meanwhile, video footages of all manner of ragtag urchins who overran the sumptuous lounges of some of our politicians to treat themselves to the good things of life should be a lesson. Citizens who believe that what is meant for them never gets to them due to misappropriation may have decided to take the laws into their own hands. The weakness of our national security architecture was also badly exposed in the manner some of these criminal elements easily overwhelmed the system and operated largely unchallenged for days. What is no longer in doubt is that Nigeria is at a crossroads.

That the whole problem started from civil protests by what ought to be the country’s most valuable future assets should compel serious attention. The anger of young Nigerians may have been stirred by the excesses of the dissolved Police Special Anti-Robbery Squad (SARS), but the challenge runs deeper. According to the latest official records, some 27 per cent Nigerians are without jobs. This is unmistakably reflected in the world’s poverty index as more than 100 million Nigerians are extremely poor. And Nigeria is demographically a country of young people. Hunger also drives people to the extreme and we saw a little bit of it in the past two weeks. While we condemn in the strongest term the recourse to barbarism, we must also remind our political leaders that the bulwark against mob action is to work in service of the people.

The only anti-dote to the crisis is to reignite the economy, which has been stagnant for decades. Some of the factors responsible for this state of affair include a growing population amid declining financial resources. The economy relies predominantly on oil which is subject to the vagaries of the international market. The Covid-19 pandemic has almost brought the economy to its knees. Public infrastructure is aging or decayed. A nation of 200 million is still struggling with about 5000 megawatts of power.

But the looming catastrophe is enhanced by lack of transparency and accountability in government. The system is abysmally corrupt as money voted for infrastructure and other projects in most cases ends up in private pockets. Thus while there is the absence of good governance at all levels, there is also a serious structural problem.Indeed, many critical stakeholders have been pushing persistently for decentralisation so that the federating units can think more and innovate, diversify their economies and by so doing strengthen the structural design for good governance and human development.

On the whole, President Muhammadu Buhari must give some dynamic leadership to the reforms Nigeria badly needs. And there is no better time to start than now!

Quote
The only anti-dote to the crisis is to reignite the economy, which has been stagnant for decades