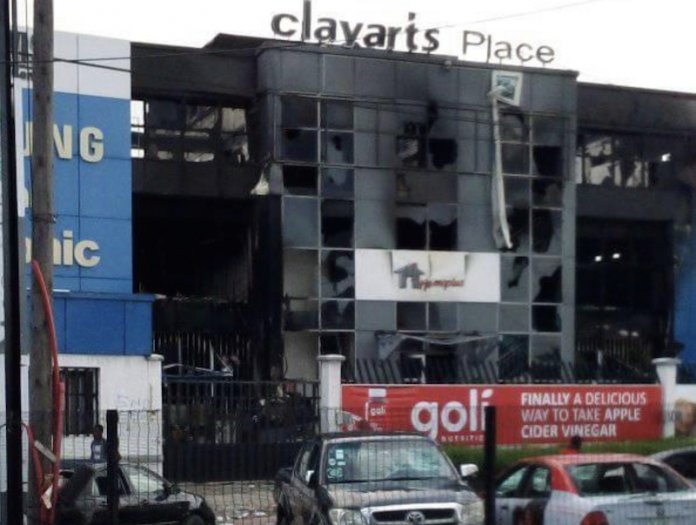 The gory impact of the lootings and arson that took place during the EndSARS protest is beginning to sink in, particularly for business owners at the receiving end, who are now pleading for government’s assistance to enable them begin again.

Some of the small business owners are apprehensive that the government may not take their loss into account, as it takes inventory of those to compensate or assist to get back on their feet.

One of such business owners that suffered desolation during the protest was Mr. Okey Adibe, the Chief Executive Officer of Clayarts Limited, owner of Clayarts Place, a plaza located at Kilometre 18, Igbo Efon Bus stop on Lekki-Epe Expressway, Lagos.

Adibe said he lost between N1.7 billion and N1.8 billion, including the Clayarts Place building and goods, to the mayhem.

Clayarts Place, located in the neighbourhood of Circle Mall, is a huge building/plaza on four floors having notable brands like Samsung, Goli as clients. It also Clayarts Place Adibe caters to their exclusive clients, who desire premium bathroom technologies, and electrical systems.

He said on the ground floor of Clayarts Place is Sims, which sells Samsung electronics, the first and second floors are occupied by Clayarts and they sell bathroom equipment, tiles and switches, among others. The fourth floor has Adibe’s office and Anglican Church, Clayarts Place. At the entrance of the plaza towards the gate is another company called Tandra that markets food supplements, Goli. All of these were looted, including the goods in Clayarts’ warehouse.

He said Clayarts sister company, Tandra lost approximately N38 million, and appealed to the government to compensate them. “Government should come and value the whole place. Right now, they went to Circle Mall but they didn’t get to my place. They should attend to us, even though we are small. All vehicles parked in the building were vandalised.

Adibe said he had come a long way with Clayarts Limited, which started business in 1985 and “we are into building materials,” stating that they moved to the new place on Lekki Expressway five years ago. The four-floor plaza housing his and several other businesses was razed and looted by an irate mob.