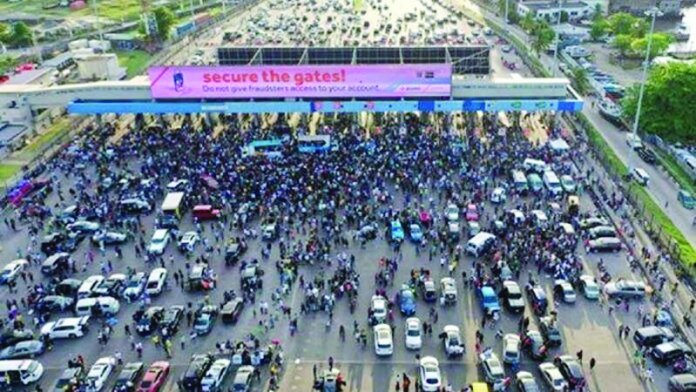 Infiltrated by miscreants, countered by hired thugs and bloodied at Lekki Tollgate by soldiers, the EndSARS youth protests, which forced potential policy changes and got the world’s attention, retreats. Louis Achi Writes

In a virtual meeting with former Heads of State and Presidents of Nigeria, 48 hours ago, President Muhammadu Buhari said it was unfortunate that the initial genuine and well-intended protest of youths in parts of the country against the Special Anti-Robbery Squad (SARS) was hijacked and misdirected.
At the meeting were all past leaders, including Gen. Yakubu Gowon, President Olusegun Obasanjo, Gen. Ibrahim Badamasi Babangida, Chief Ernest Shonekan, Gen. Abulsalami Abubakar and former President Goodluck Jonathan.

The president recounted the initial concessions made by his administration on the demands of youths protesting against the excesses of some members of the SARS. He recalled that the youths had demanded that the squad be disbanded.

Specifically, he listed the additional demands made by the EndSARS protesters. These included the immediate release of all arrested protesters; Justice for deceased victims of police brutality and appropriate compensation for their families; setting up an independent body to oversee the investigation and prosecution of all reports of Police misconduct within 10 days; psychological evaluation and re-training of all disbanded SARS officers before they can be re-deployed; and increase in Police salary.

Then, perhaps, to his main point, Buhari declared: “We accepted all the demands and proceeded immediately to scrap SARS and started the process of addressing the other demands. Unfortunately, the protesters refused to call off the protest and engage the government to address their grievances. Instead, they became emboldened and gradually turned violent.”

Further according to him, the government would not fold its arms and allow miscreants and criminals continue to perpetrate acts of hooliganism in the country.
Analysing President Buhari’s first national broadcast addressing the two-week long EndSARS protests by angry but very organised and peaceful youths, a wide swathe of commentators and stakeholders pilloried the president for keeping mum on the alleged Lekki killings of unarmed protesters by soldiers.
But the president’s minders have explained away that faux pas on the need for the Defence Headquarters and Lagos State government to conclude their investigations.

Various estimations put the number of deaths related to the nationwide protests at over 70. These include civilian protesters, policemen and soldiers. Countless individuals were also wounded and massive damages to property and assets were sustained.

It is a fact that youths coming together in joint action have served as a major engine of social transformation throughout human history. At key moments, younger generations have repeatedly acted to challenge and influence the dismantling of systems of oppression, subordination and injustice.
Today, youth-led collective action is proving decisive in combating global challenges. From fighting for the environment, to protecting and expanding human rights to demanding economic justice, young folks are at the forefront of change.

An emerging consensus is that though the youth protest focused mainly on Police brutality while the government curiously looks away, the rage and vehemence is deeper and have been caged up for many years. The intensity of feelings expressed and distrust at related government rhetoric hints at a fundamental message that core changes in both policing matters and governance templates must be holistically addressed.

The assumption that Nigerian youths are lazy and lack the will or focus to sustain any meaningful protests has been emphatically laid to rest. The massive, peaceful and well-organised youth-centered EndSARS protests, in much of the country, keys into the rejection of oppression and injustice in any form.

After the Lekki condemnable attacks on protesters following a curfew declared by Governor Babajide Sanwo-Olu of Lagos State, the youth protesters have apparently gone on informal recess. A new phase of their engagement with government should be the next logical step – to ensure that the changes promised are genuinely delivered.

For instance, according to Pastor Poju Oyemade, “The streets peaceful protest is over but the opportunity for change within the legal framework is now wide open. The real effort behind the scenes can now begin. Channel the energy right. It takes time to bring about change. You cannot be hasty.

“The streets have a life span, it is good but when it can no longer be peaceful it works against you. Build a party or become delegates. Energy for change must be channeled through the political process. One big step is to become delegates, who elect the candidates within a party structure. This is one of the most influential positions in the process, which is accessible and easy to reach today.”
Pastor Poju Oyemade’s prescription may well be one out of possible several reasoned engagement options before the youths.

While former President Goodluck Jonathan had cautioned that “No Nigerian blood needs to be spilled or life lost during a peaceful protest that seeks to advance our country,” considerable human blood has been unjustifiably spilled. Their memories need to be respected.

Even at press time, reports still kept filtering in of hoodlums on rampage and disrupting legitimate citizens’ activity, both the Southern and Northern states. Meanwhile, for the majority of Nigerians, it’s yet morning on creation day.