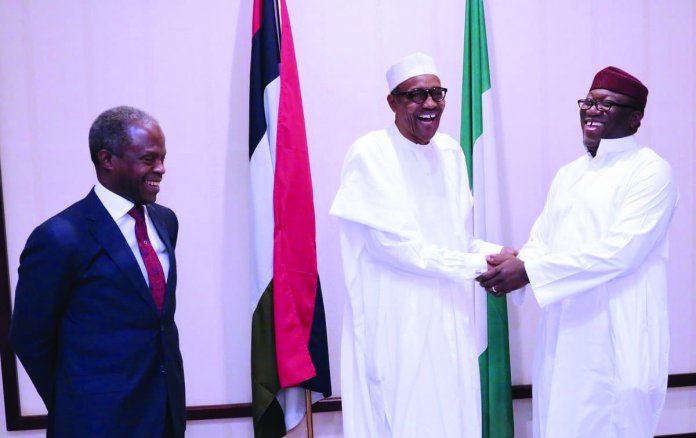 President Muhamamdu Buhari’s Thursday address to the nation on the #ENDSARS protest, which later turned violent had written all over it, the ‘signatures’ of the Nigerian governors, writes Olawale Olaleye

Although to many, last Thursday’s nationwide address by President Muhammadu Buhari came a bit late, it only calmed a few nerves in Lagos, while humongous violence spread at the near speed of light to other parts of the country.

Sadly, the development had begun to assume different dimensions, including ethnic and political twists to it, forcing the governors to quickly engage the president and appeal to him to address the protesters with a view to renewing hope.

Specifically, the Ekiti State Governor, Dr. Kayode Fayemi was being accused by some persons of allegedly leading people to the president to accuse a former governor of Lagos State and one of the national leaders of the All Progressives Congress (APC), Bola Tinubu as being the brain behind the protest.

However, that the meeting between the president and the governors, led by Fayemi, Chairman of Nigeria Governors’ Forum (NGF) and his Sokoto State counterpart, Aminu Tambuwal, who also doubles as his deputy in the NGF, happened about the same time, soon put a lie to such insinuations, which had already begun to needlessly inflame passion.

Indeed, the governors, from the minutes of their meeting, set the template for the president’s broadcast and gave considerable advices on how best to handle the matter, which had begun to blow out of control, including the manner he was supposed to address the angry youths, whose demands they all agreed were genuine.

The minutes of their meeting read thus: “Mr. President, thank you for meeting us at a very short notice. In furtherance of our meeting with Mr. President tonight on behalf of all Governors, we hereby outline our position on the EndSARS issue as requested by Mr. President.

“Governors feel strongly that they are in this together with Mr. President and the FGN, and to this end, agree to take full charge in their various states. Governors commend Mr. President for directing security institutions to exercise restraint in the use of force and for demonstrating commitment to act on the five point agenda of the protesters.

“Governors believe it has now become necessary for Mr. President to make a further broadcast on the issues pertaining to the protest – more of a Father to his children broadcast, rather than a ‘my fellow compatriots’ speech.

“Broadcast should highlight specific steps taken on the five points demand, three of which have been responded to, namely – disbandment of SARS, on-going establishment of judicial panels of inquiry in states on violations and compensation and freeing of persons held arbitrarily in various police detention centres.

“On the two outstanding items – namely (a) improvement in salaries and remuneration package for police men and (b) psychological evaluation of SARS’ officers, it is clear that 2021 budget proposal containing emoluments has been forwarded to the NASS and the estimates were based on the existing salaries.

“Mr. President would consult with NASS with a view to upgrading the remuneration package. Mr. President has consistently demonstrated his commitment to workers in the security agencies and this is a case of preaching to the converted. On medical and psychological evaluation, it is also clear that this is process driven, not something that can be done by fiat.

“It is also the view of Governors that even though the EndSARS group is deliberately amorphous and has refused to identify the leadership Cadre, Mr. President could offer an olive branch to them in the broadcast by suggesting that his team, probably led by the Vice President and comprising of some Governors and few other critical stakeholders like the IGP is ready and willing to meet with their representatives to further deepen engagement.

“Having put the above forward, Mr. President may wish to use the broadcast to appeal to the young ones, acknowledging that they have spoken loud and clear and he applauds them for exercising their freedom of expression towards the improvement of policing in Nigeria.

“The broadcast should then stress that it is now appropriate, however, for protesters to return to call off their action so that government can work on their demands and also ensure that their otherwise well intentioned agitation is not lost to those, who may have ulterior motives in wanting this mayhem to continue.

“Mr. President should give examples of the unfortunate violent turn this has taken in some states and a time-line within which he would like the streets to be clear of protesters, hence the need for the genuine body to call off their action.

“Governors also expressed the view that the replacement of SARS with SWAT was too sudden and precipitate, giving the impression that this was just a name change, rather than a substantive one. It is our view, therefore, that in order to better manage perception, it may be advisable to temporarily suspend the establishment of the new tactical unit.

“In order to avoid a vacuum being created, the IGP could direct state commands to device the best means of managing the transition on a state by state basis until such a time that the replacement can gain traction with the broader citizenry.

“In order to deepen the conversation on policing and police reform, Governors are of the view that it may be expedient to summon an expanded Council of State meeting, or at the minimum, convene the constitutionally empowered Nigeria Police Council to extensively consider various modalities for police reform once normalcy returns to the country.

“Equally, Governors believe the reopening of universities and other tertiary institutions would provide a window of opportunity to keep the young, university students otherwise occupied. This may require a quick resolution of the current impasse with ASUU.

“Finally, Governors respectfully underscore the urgency of now in these matters and propose that Mr. President’s broadcast should happen expeditiously with a view to returning the country to normalcy latest by Friday, 23 October 2020.”

Interestingly, contained in the president’s speech, which was broadcast on Thursday night, were practically all that the governors advised, leaving out almost nothing, although communicated in a different language.

Thus, those who had been insinuating that some governors, particularly, Fayemi had blacklisted Tinubu as the mastermind of the protest, had an ulterior motive, which neither added nor removed from the situation but had only exposed the naivety and the mischief of the rumour peddlers.
But with the nationwide looting and destruction had begun to escalate dangerously, there is a need for government to step in more frontally and decisively. That notwithstanding, nothing can take away the fact that the governors had a huge input in the president’s speech, which as at today, remains a talking point.