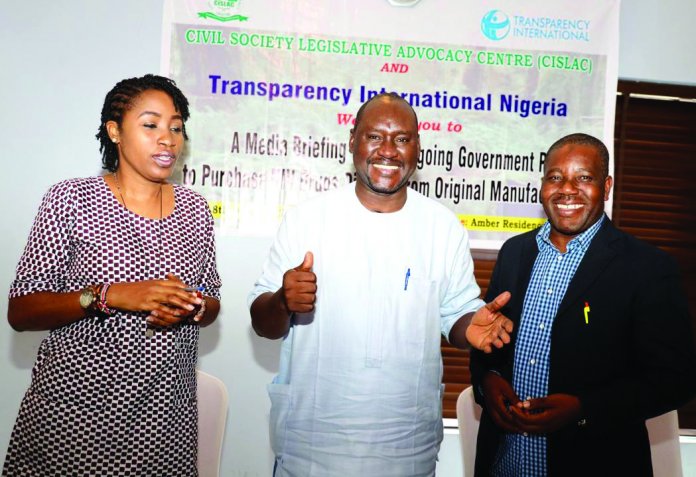 The Civil Society Legislative Advocacy Centre (CISLAC) and Transparency International have declared support for federal government’s decision to purchase HIV/AIDS drugs directly from manufacturers henceforth, while cutting off the middle men. If the move succeeds, it will save 3.1 million Nigerians living with HIV/AIDS, writes Sunday Ehigiator

The current wave of the COVID-19 pandemic has again exposed the rot in the health sector. However, as people take advantage of the pandemic to manipulate the supply of HIV/AIDS drugs, the federal government appears ready to nip the issue in the bud and facilitate more transparency with its decision to cut off middle men, and procure the retroviral drugs directly from the manufacturers.

While international treaties and governments across the world recognise adequate, accessible and affordable health care as a fundamental human right, the cost of drugs in Nigeria is generally high. The continued rise in price has made many essential and prescription medications unaffordable, and therefore inaccessible, by quite a large number of Nigerians, who live below the poverty line. This, without doubt, comes with grave consequences of morbidity and mortality to consumers of health care products in Nigeria.
The high cost of drugs triggered by high production and supply costs encourages the patronage of merchants of fake and substandard drugs in the country with the attendant damage to the health of the people.

At a media briefing to commend the Federal Government’s initiative held on October 8, 2020, the Executive Director of CISLAC, Auwal Ibrahim Musa (Rafsanjani), noted that as the Nigerian government struggles to sustain provision of free anti-retroviral drugs as part of HIV programmes in health facilities for an estimated 3.1 million people living with HIV/AIDS, “this effort is mostly sabotaged by inflated prices quoted by supplying contractors, whose activities render government’s effort inadequate to eliminate the high and sometimes inequitable economic burden of HIV/AIDS on households.
“This exorbitant prices quoted by existing contractors render government financially incapacitated to adequately provide for, and make anti-retroviral drugs accessible across health care facilities, which records resultant regular stock-out, health hazards and relapse of illnesses.

“We observed the strong resistance by some contractors with support of some insiders to prevent the National Agency for the Control of AIDS (NACA) from buying HIV drugs directly from original manufacturers which allows government to put more people on treatment.
“The Civil Society Legislative Advocacy Centre (CISLAC)/Transparency International Nigeria is perturbed by the continued but unchecked attitudes of the fraudulent contractors, whose unlawful activities hitherto dominate the procurement process of NACA.”
Musa, who questioned the rationale behind the appointment of just one company to procure the drugs on behalf of the country for over five years, says the contractor supplies the government at $13 per drug instead of original price of $7 per drug in which the FG is set to be buying the drugs following the intended reforms.

Musa said, the above informed the recent commendable decision by NACA to purchase anti-retroviral drugs directly from the manufacturers at half the cost quoted by the contractors and middlemen to enable adequate and sustainable provision of the drugs to wider coverage within the Agency’s available resources.

“While we acknowledge NACA’s plan to establish HIV Trust Fund driven by private sector to support existing efforts of the government, we observe that without current support by the United States Government and the Global Fund, it would cost Nigeria N50 billion to treat one million people living with HIV annually.

“Giving the existing cost-efficient practice by the United States Government and Global Fund involving direct purchase of the drugs from the manufacturers, we are worried by the ill-informed, pocket-serving and discrediting petitions by some vested interests, who have endlessly benefited from inflated prices of the drugs in the last five years to discourage the ongoing effort of NACA to directly source the drugs primarily for sustainability and wider coverage.
“CISLAC/TI Nigeria gathered that the contractors currently sell the anti-retroviral drugs at $13 per patient against $7 given by the manufacturers.

“We are also concerned that over-reliance on donor funds in the fight against HIV in the country constitutes a dangerous trend to sustainability, hence the need for the government to take full ownership in the prevention and treatment of HIV in the country.”
It is not a lie that Nigeria has not been able to solely provide enough drugs for the population of those living with the virus in the country, this Musa warned, that, unless it blocks wastage, the foreign donations towards the plight of people living with the virus may be withdrawn, which could cause more harm to the affected people and the country in general. He also noted that corruption in the treatment of HIV/AIDS was not different from the corruption in the health sector.
“In 2003, Nigeria’s ARV programmes attracted much criticisms when treatment centres were alleged to be handing out expired drugs and rejecting patients.

“In a detailed investigative news report of December 28, 2018, the International Centre for Investigative Reporting (ICIR) revealed that hundreds of millions of naira released for HIV campaigns, counselling and testing services might have ended in private pockets of contractors and government officials, as companies were specifically registered to siphon funds meant to save the lives of the infected.”
From the foregoing, the organisation therefore prayed that the FG must “insist that fraudulent contractors who undermine the Public Procurement Act must be thoroughly scrutinised and discouraged from defrauding the government through inflated anti-retroviral drugs supply services.”

They also called on the newly appointed Director General of NACA, Gambo Aliyu, “to engage stringent reforms in the Agency’s procurement process for impactful, efficient and cost-effective wider and sustainable service delivery in Nigeria.”
CISLAC/TI Nigeria added: “He must devise appropriate sustainability plan for the procurement of drugs and consumables through cost-effective means and encouraged technically know-how for domestic production in the presence of dwindling donors’ support; and avert recurring of challenges thrown at the country by Covid-19 pandemic.

“Also we call on the Department of State Security to investigate the activities of Politically Exposed Persons (PEPs) who constitute themselves as faceless contractors and their relationship with the leadership of the Network of People Living with HIV, who we learnt are secretly used to obstruct and frustrate NACA’s effort from directly purchasing from manufacturers.
“As part of sustainability plan, CISLAC/TI Nigeria calls on regulatory authorities, like NAFDAC, to support and enhance local production of affordable antiretroviral drugs with serious consideration while issuing marketing authorisation to local manufacturers.

“We also call for review of heavy tax burden on the pharmaceutical sector to avert multiple taxation by local, state and federal governments as well as high tariffs on raw materials, packaging materials and other ancillary materials used to manufacture medicines, primarily to encourage local production in the country.
“Government must also develop a pricing policy to reduce reported high prices and wide disparity between prices of essential drugs in the country.”

Also speaking at the event, a legal practitioner and a board member of CISLAC, Adeshina Oke, harped on the importance of good health to leadership, productive economy, and healthy citizens. According to him, “A sick country cannot have a good leadership, neither can it have a productive economy or citizen. Hence, we must get read of anything capable of deteriorating our health as a nation.
“And we cannot depend on donors forever as a country. In the long term, we must begin to look towards empowering our higher institutions for research purposes. These drugs could be a lot cheaper if they are manufactured here in Nigeria.
“Nigeria must empower her institutions so that they can be fit enough to uphold the country, should that day come and funding stops coming in for purchase of retroviral drugs. And the time to start preparing is now.”