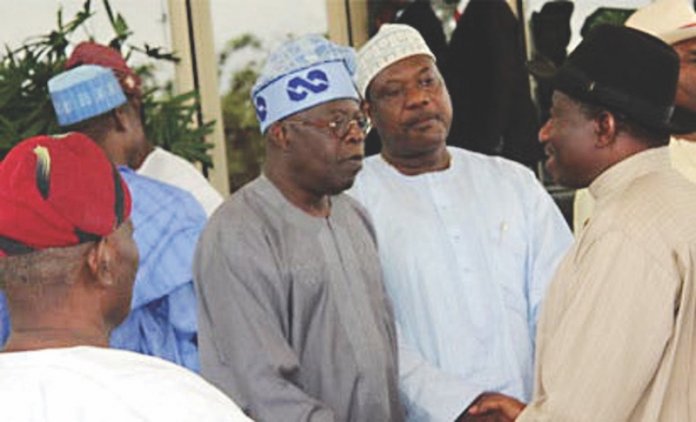 The fact that former President Goodluck Jonathan is definitely going to be an issue in the 2023 election is fast changing the tenor of the debate, writes Bayo Akinloye

When THISDAY published an exclusive story last Sunday headlined: “Buhari’s Supporters Considering Jonathan for 2023 Presidential Run”, it must have been considered an innocuous news story.

But any time somebody ‘sneezes’ regarding the 2023 presidential election, it is not only the All Progressives Congress that catches the coldest cold; the camp of Asiwaju Bola Tinubu and his so-called apologists, also do that.
Tinubu has never denied having an intention to run for the 2023 presidency. What he has always denied is declaring the intention to contest this early.

But the thought of a formidable force as Jonathan though scorned on many occasions by the APC, might have put the Tinubu camp in a panic mode, resulting in what’s now regarded as a knee-jerk article published in a national daily (not THISDAY) – an article riddled with desperation, disillusionment, and lacklustre logic.

That piece has since been considered the hand of its writer but the voice of Tinubu.
Unlike many political leaders, Jonathan has remained a unifying figure in Nigeria. Even the APC, including President Muhammadu Buhari, attests to that. It, therefore, follows logic for any political camp or group to fly a kite with his name.
However, beyond the demonisation of Jonathan, there are unassailable truths about him. He represents a united Nigeria, a peace-loving leader, who puts the interest of Nigerians above his personal ambition, and definitely not a dictator-democrat.

Jonathan, no doubt, has his flaws, but it cannot be denied that as President of the Federal Republic of Nigeria, he made significant contributions to the political, economic and social development of Nigeria.
He promoted the democratisation of the body polity through the observance of the rule of law, enactment of the Freedom of Information Act, electoral reforms and non-interference in electoral outcomes.

Northerners, according to political watchers, have enough reasons to be grateful to Jonathan, because when nobody, not even the northern elite, believed in the hapless almajirai that litter the region, it was Jonathan, who committed billions of naira to redeem their unsavoury situation.

To that extent, any attempt to haul the former president, who has now taken up the role of a peace ambassador across Africa, into the politics of 2023 might appear to be punching shadows, as suggested by Jonathan’s media aide, Ikechukwu Eze.
“Those postulations are the opinions of individuals and I don’t want to comment on them,” said Eze in a terse reply to questions regarding his principal being propped up by Buhari’s camp and the northerners for the 2023 presidential election.
It will appear that Jonathan is contented with his post-presidential mission of promoting peace, progress, and prosperity in Nigeria and on the African continent, according to those close to him.

A close source to the former president, even pointed out that it is for that reason that Jonathan has not for some time been actively involved in partisan engagements, not even in the affairs of the Peoples Democratic Party.
Rather than the Tinubu camp trying to caution Jonathan against some hegemons ahead of the 2023 election, political observers reminded Tinubu and his apologists to remember that the same hegemons rose to power based “solely on the hubris of Bola Tinubu, who thought there would be honour amongst political power grabbers.

“Faced with public embarrassment and the preference for Jonathan, by those for whom he sold his people’s birthright, Bola Tinubu is now behaving like a woman scorned. He broke laws one and two of the 48 Law of Power – ‘Never put too much trust in friends’ and learn to ‘conceal your intentions’,” a public commentator, who spoke on the condition of anonymity stated.
There are also suggestions that Tinubu placed too much trust in the hegemons that he now insults by proxy through the said article and that the APC national leader’s presidential ambition is Nigeria’s worst kept secret.

“It is not only Jonathan’s humility that makes him attractive to the so-called hegemons. Bola Tinubu’s shrinking empire has exposed him as a once-upon-a-time asset that has now become a liability, with diminishing returns,” the commentator added.
According to him, the once-revered colossus has been exposed as having feet of clay: he lost Oyo, and Edo, won Osun only by ‘remote control’ and is irrelevant in Ondo.

Arguing further, he said, “Bola Tinubu has often dismissed Jonathan as being naive, but in the end, it is he who has shown his naivety by expecting the Buhari camp to be grateful to him, rather than appealing to their self-interest.”

While Jonathan used his absence from the political centre stage to cultivate his image as Nigeria and Africa’s face of democracy, it is the consensus of many political observers that Tinubu used “his 15 minutes of fame” on the centre stage to solidify his image as Nigeria’s face of political godfatherism with his “ill-advised” video to the Edo State electorate, believed to have cost Osagie Ize-Iyamu the governorship election.

The analyst further argued that by sitting on the fence, when his “client-governors” were launching Amotekun, Tinubu proved to the hegemons that he could not be trusted with ensuring the continued existence of Nigeria as a single corporate entity.
“Finally, by unleashing foot soldiers on the hegemons, Tinubu has offended the wrong people,” the analyst explained.