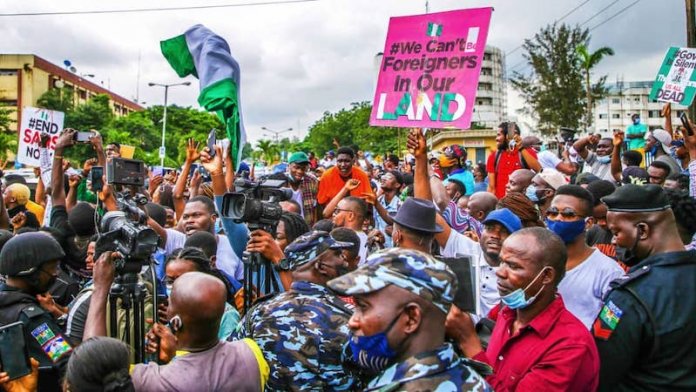 •Demonstration rocks Lagos, goes global, as one killed in Oyo

Anti-police brutality protesters using the hashtag #EndSARS continued to march through major cities in the country at the weekend, with the demonstrations in some areas resulting in clashes with riot police called in by government to end the protests. The protesters have refused to back down until the presidency and the police hierarchy give in to their demand to proscribe the Special Anti Robbery Squad (SARS) of the Nigeria Police nationwide.

One person was killed in Ogbomoso, Oyo State, as campaigners marched on the town to rally against worsening extrajudicial acts by the Nigeria Police. THISDAY gathered that the protest began peacefully, but later snowballed into violence after a police officer, reportedly, shot dead an unidentified protester. Eyewitnesses said the protesters had met stiff opposition from the police, who shot at them in a bid to disperse the crowds. Bullets hit two protesters. One of them, a student, died on the spot, while the other was said to be on danger list in the hospital.
In Lagos State, the protests took place in several parts of the state, including Ikoyi, Amuwo-Odofin, Ikorodu, Unilag, Ajegunle, Egbeda, Agege, Gbagada, Bariga, Ikotun, Idimu, Lekki, and Yaba.

In Agege, women numbering over 100 marched on the streets, chanting songs in Yoruba language. The women pleaded for an end to the killing of their children. They asked the government to ensure the scrapping of SARS. Their protest came on the heels of a 72-hour protest staged by youths in Lagos. The youths, who began their protest on Wednesday, stayed up late into the early hours of yesterday, demanding the scrapping of the special police unit.

The marchers carried placards bearing inscriptions like “Am I the next to die”, “Stop Police Brutality”, “Why shoot bullets at us”, “I am not a criminal #EndSARS”, “Our lives matter”, “Stop criminalising innocent citizens”, and “Stop extorting and killing us”.
The protest has also gone global, with calls for protests in the US, UK, Canada, Switzerland, and Germany. Well-known global entertainment figures, like Diddy, Treyz Song, Chance the Rapper, Lil Baby, Damson Idris, City Girls, and Nigeria’s John Boyega, have thrown their weight behind the cause, with many of them using the #EndSARS hashtag.

Giving voice to the clamour, Amnesty International lamented that police torture was a stain on the Nigerian society that must be addressed with clear orders to law enforcement officers not to inflict torture or other ill treatment on detainees under any circumstance.
In series of tweets, Amnesty International said, “There is much compelling public evidence of human rights violations committed by SARS, some of it directly documented by Amnesty International, and this should be used to aid an effective investigation into the unit’s crimes.

“All the Nigerian authorities’ promises of ‘reforming’ SARS have, so far, proven to be empty and ineffective. Restructuring SARS is not enough unless the government takes concrete steps to protect Nigerians.
“Because of the corruption in Nigerian police @PoliceNG all Nigerian government’s previous attempts at stamping out torture have proven completely ineffective and clearly impossible.”

In recent times, the activities of the police unit have come under scrutiny and several members of the squad have been accused of using their position of authority to trample on the rights of citizens, especially the youth.
The #EndSARS protest got support from entertainers and other celebrities, as a group of young people, including Mr. Debo Adebayo, a comedian popularly known as Mr. Macaroni, stormed the premises of the Lagos State House of Assembly, asking that the lawmakers pass a legislation disbanding the SARS unit of the Nigeria Police.

Deputy Governor of Lagos State, Dr. Obafemi Hamzat, who addressed the protesters on Friday, advised the youth to be civil in the expression of their grievances. Hamzat urged the protesters not to block the roads, saying the state government would not condone brutality and violation of citizens’ rights by security operatives. He said Governor Babajide Sanwo-Olu had already communicated the position of the state on the matter to the appropriate quarters.

The deputy governor stated, “The tenet of the police operation is to protect the citizens. Security operatives don’t have the right to trample on the rights of law-abiding citizens, because of their unfamiliar looks, or because they are carrying laptops or iPhones. It is wrong for any police officer to expressly accuse or pronounce someone, irrespective of age, guilty because they have dreads or ride luxury vehicles.

“As a government, we support evidence-based investigations and actions driven by intelligence. The procedure of arrest and prosecution must be followed through. We are equally aggrieved like every other law-abiding Nigerian. If a young man or woman, who is legitimately doing his or her job, is attacked or maimed by police officers for no reason, we will never support that. We condemn police brutality in whatever guise and we will continue to engage their leadership for change.”

Hamzat also told the protesters, “We fully understand the reasons for your anger but this demonstration must also carried out in line with the law. If we employ violence or destruction to drive home our grievances, we will also be hurting ourselves. The protest must be orderly, so that those concerned will get the salient point of the message.
“You can’t block the road, disrupt free flow of traffic and prevent other people from embarking on their lawful duties, especially the emergency responders. As citizens, it is within your rights to express your grievances but let us exercise caution and eschew violence. The authorities have heard your voice and I hope we all leave the roads with the understanding that drastic changes will be effected.”

As the deputy governor left the scene about 1:15pm, the protesters continued to chant anti-police songs, calling for the disbanding of SARS. But, Hamzat instructed security operatives at the scene not to harass or exchange words with anyone.
Meanwhile, as the protests spread to Ogun State, the governor, Prince Dapo Abiodun, weekend, warned the anti-SARS demonstrators to desist from acts capable of breaching public peace and security.

Abiodun said, “It is gratifying that President Buhari, as the Commander-in-Chief, has given appropriate directives to the Inspector-General of Police (IGP) on this issue and the IGP has taken some immediate steps in this direction.”
In a statement issued in Abeokuta on Saturday by his Chief Press Secretary, Kunle Somorin, the governor expressed displeasure at the vandalisiation of police formations and public property, and molestation of innocent citizens, as witnessed in the last few days of the protest.

The statement said, “Whilst we respect the rights of citizens to ventilate their views on any matter of concern and not condoning the excesses of SARS, such views should be expressed in manners that do not undermine law and order or security and safety of lives and property. We cannot condone illegalities and lawlessness in an attempt to call attention to another issue.”

Abiodun added, “Ogun State Government is closely monitoring developments in this regards and enjoins parents and guardians to prevail on their children and wards to refrain from any act that may pitch them against the law…
“The youths are, in particular, the focus of the Building Our Future Together Agenda of our administration. Therefore, their safety and security are topmost priorities, the same way we have responsibility for safety and welfare of all residents and citizens of Ogun State.”