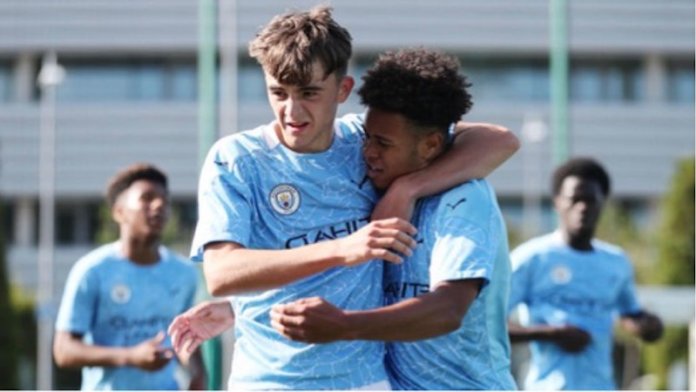 When you mention the Sodjes, football readily comes to mind and the family, notably Efe and Sam had contributed their quota to the Super Eagles. With the Tai Sodje taking the English U-18 Premier League by storm, scoring in each of his four starts, including a hat-trick, the question on the lips of observers is whether the national team would soon have another Sodje in its fold

The Sodjes were once household names in Nigerian football circles, with Efe starring for the Super Eagles at the 2002 World Cup in Japan/Korea, while his brother was at the heart of the Nigerian senior national team for many years.

Just when the country’s soccer fans thought they have seen the last of the senior Sodjes, another has emerged in Tai Sodje.
Though, the 17-year-old England-born Nigerian seems to be toeing the path of England, his uncle, Sam has vowed to convince his godson and nephew, Tai, to pledge his international future to Nigeria over England.

Aged 17 and a first-year scholar at Manchester City, Tai is literally in the form of his life, scoring in each of his first four starts for the Citizens in the U-18 Premier League, with the highlight of his performance being the hat-trick he scored against Liverpool on September 26.

Capable of playing as an attacker and winger, Tai has been likened to Arsenal captain Pierre-Emerick Aubameyang for his similar playing style and goalscoring prowess.
Sam has acknowledged that Tai is more English than Nigerian but he wants the highly-rated teenager to follow in the footsteps of his uncles by playing for the Super Eagles when he comes of age.

Speaking to the Super Eagles media team via YouTube, Sam Sodje said: “I’ve got a young nephew who is half English, half Nigerian, whom they see as an English player but definitely I will convince him and it’s easy for me to convince him because we’ve got a good set up in Nigeria at the moment.

“His name is Tai Sodje, he plays for Manchester City, he’s 17 years old, top, top striker.
“I don’t need to sell him, he’s going to sell himself, he scored a hat-trick last week against Liverpool U-18s so he’s a player I’m looking to see him play for Nigeria because it’s different from me as I grew up in this country so I wanted to play here but he has been to Nigeria once.

“He’s more of an English boy than Nigerian boy but he’s got uncles like myself that can tell him how it’s a dream come true to play for Nigeria.”
Former Sheffield United youth-teamer Tai Sodje is the leading marksman in the U-18 Premier League North and South with six goals.
Tai has had a blistering start to the 2020-2021 season in terms of goals after finding the net in each of his first two games in the U-18 Premier League.

Despite the fact he is a first-year scholar, Manchester City U-18 coach Carlos Vicens included the Anglo-Nigerian frontman in his starting lineup against Wolverhampton Wanderers and Everton and he repaid the manager’s faith.
On the opening day of the season, Tai Sodje curled home from 10 yards to give City a 3-0 lead, his first official goal for Manchester City’s U-18 team.

The following weekend, he scored a crucial equaliser on the stroke of halftime as the Citizens were forced to a 2-2 draw by Everton.
Several Premier League clubs including Newcastle United, Liverpool and Everton expressed interest in the services of the Sheffield United Academy product before City won the race for his signature in 2015.

The promising striker rose through the ranks and was rewarded with his competitive debut for Man City U-18s while still a schoolboy.
The Sodjes sporting family were in the news last year for the wrong reasons after three of the brothers were jailed for siphoning cash from their foundation, UK’s National Crime Agency said.

Efe Sodje, Stephen Sodje, and ex-rugby player Bright Sodje, were found guilty of diverting cash from the Sodje Sports Foundation (SSF) set up in 2009 to help children in Nigeria’s oil-producing Niger Delta region.
They were jailed for 18, 21 and 30 months respectively by a judge at the Central Criminal Court in London in 2017.
The NCA said the brothers used their status and business connections to garner support and donations but failed to remit the funds to the charity.

The brothers used around £63,000 raised from charity events between 2011 to 2014 for their own gain, according to the NCA.
They organised charity football matches and black-tie dinners over the period to raise funds, but none of it got to the children, the agency said on its website and donors also sent around £34,000 to their accounts.

The Sodjes are a family of 11 siblings born in Greenwich, Southeast London to Nigerian parents.
Efe played professional football for several clubs in the UK and represented the Nigerian national team at the 2002 FIFA World Cup.
Tai is expected to continue the football dynasty for Nigeria where his uncles stopped.