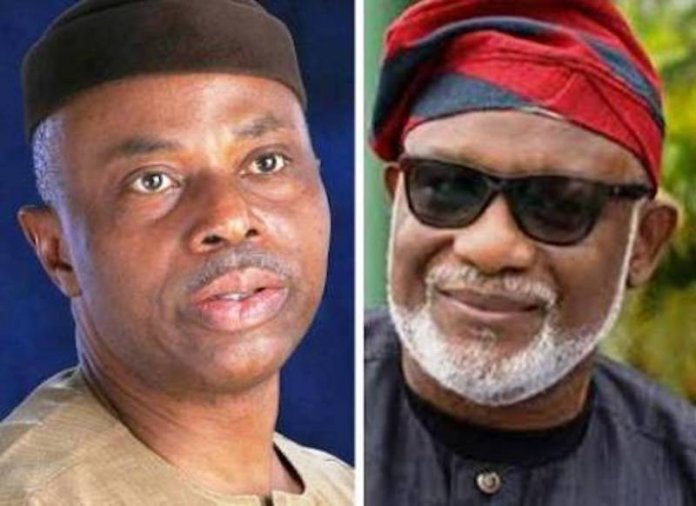 Segun James in Lagos and James Sowole in Akure

Ondo State Governor, Mr. Oluwarotimi Akeredolu, and his predecessor, Dr. Olusegun Mimiko, have accused one another of performing poorly in office.

While Mimiko described Akeredolu’s administration as a disappointment and anti-people based on its policies in education and health sectors, Akeredolu said some actions taken by Mimiko while in office actually negated the welfarism his government preached.

The former governor described his successor’s government as anti-people because of the cancellation of free health services and increase in tuition fees paid by the students of tertiary institutions in the state.
Mimiko, who said he had worked with three governors before becoming governor for eight years, said Akeredolu’s government has failed the people of the state in all critical sectors affecting their well-being.

Mimiko said the utterances of Akeredolu have clearly shown that he is not part of the state as he had vowed to go back to his base if not voted for.
The former governor lamented the failure of his successor to build on the successes recorded in the health and education sectors during his tenure as governor.

He urged the people to vote out the anti-people government and vote for Ajayi and Mr. Gboye Adegbenro as governor and deputy governor on the platform of the ZLP.
Reacting directly to Mimiko’s utterances, Akeredolu in a statement by the spokesperson of his campaign organisation, Mr. Richard Olabode, said the former governor, had done more damage to the state than his successor.

He said: “It is unfortunate that a governor that sacked over 10,000 workers in Ondo State is calling the Akeredolu administration an anti-people government. It’s on record that Akeredolu since inception in office has not sacked anyone in the state workforce either at the local or state level.

“The Akeredolu administration came and realised that Mimiko only had two mother and child hospitals in the whole of the state. The governor has now expanded from two to seven and they are now across the three senatorial districts of the state.

“As we speak, work is ongoing at the teaching hospital both in Ondo and Akure. Akeredolu has introduced the contributory health scheme, which has also brought about free health care service for children under the age of five and pregnant women.

“Those lecturers that were sacked unjustly at the Rufus Giwa Polytechnic, Owo and Adekunle Ajasin University, Akungba Akoko are still alive to bear witness to the anti people government of Mimiko in this state.

“These workers were only reinstated by Akeredolu. Because of politics, Mimiko killed the Olusegun Agagu University of Science and Technology, Okitipupa (OAUSTECH). What’s more anti -people than the actions of Mimiko in abandoning the various projects left behind by the late Olusegun Agagu?

“So, on health, Akeredolu has surpassed Mimiko in achievements, just as the Akeredolu administration has recorded significant stride in education and people’s welfare.”

Meanwhile, the Chairman of the National Campaign Council of the All Progressives Congress (APC) for Ondo State governorship election and Governor of Lagos State, Mr. Babajide Sanwo-Olu, yesterday in Akure, the Ondo State capital solicited support for the APC and its governorship candidate, Akeredolu.

Sanwo-Olu, who was accompanied by some members of the party’s National Campaign Council, met with APC leaders and critical stakeholders in Ondo State in preparation for the October 10 gubernatorial poll.

Apart from meeting with the APC stakeholders, Sanwo-Olu also joined the campaign train of Akeredolu and his running mate, Hon. Lucky Aiyedatiwa, to rally support for the party in some towns and local government areas ahead of the gubernatorial election.
Penultimate Saturday, Sanwo-Olu had joined other party leaders, who defied the downpour, to flag off the governorship campaign for Akeredolu.

Speaking on the election, Sanwo-Olu said the APC in Ondo State had performed creditably to defeat all the other candidates.
He said: “There is no gainsaying that our candidate has done well in his first term as Governor of Ondo State.

“Without sounding immodest, Akeredolu will defeat his closest rival by more than thirty per cent of the ballots.
“The people of Ondo State know our party and I dare say that we are the only party they trust to deliver the goods to them. That’s exactly what the government of Rotimi Akeredolu has been doing in the last three and half years.

“Therefore, Ondo people will come out on October 10, to cast their votes knowing full well that Akeredolu needs to be given a chance to continue with all his good work.”
Sanwo-Olu said his last visit to Akure where he witnessed a monumental support and a display of affection for Akeredolu by the residents was an eye-opener.