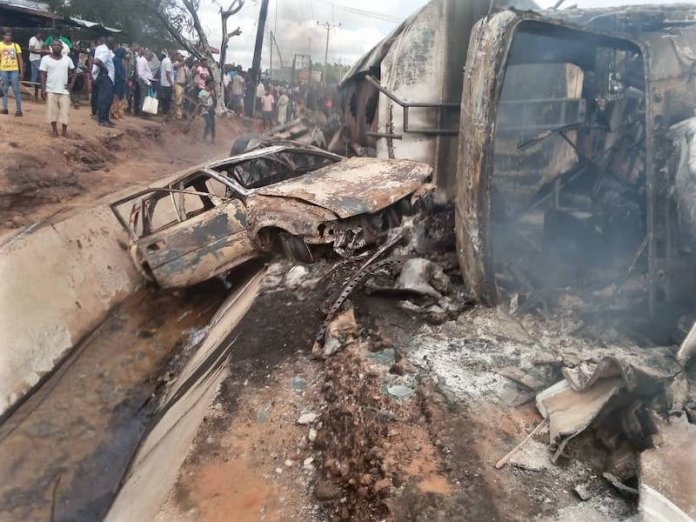 It was a tragic end for no fewer than 25 persons who lost their lives Wednesday in a multiple auto- crash that occured when an articulated petrol tanker lost control, fell on a car and burst into flame, killing 23 people, including school children.

THISDAY gathered that the accident occured at about 7.30am on Wednesday at Felele, a subburb of Lokoja, Kogi State Capital, when the tanker lost control as result brake failure and fell on a moving family car crushing them to death before the tanker went into flame.

Eye witnesse told journalists at the scene of the accident that the articlated fuel tanker fell around popular GT plaza at Felele area on Lokoja-Abuja highway on Wednesday morning.

He pointed out that several other vehicles, motorcycles and tricycles rammed into the accident, killing their occupants.

It was gathered that the petrol tanker, fully loaded with premium motor spirit and belonging to the Nigerian National Petroleum Corporation, rammed into five cars, two motorbikes and three tricyles popularly known as Keke.

Sources explained further that among those killed include five students of the state owned Polytechnic, three nursery school pupils and passersby, while a business man identified as Samson, his wife and three children were also killed.

The businessman, a sewing machine seller somewhere in Lokoja, was said to have met his death while dropping off his children at school.

” I was about crossing the road when I noticed the tanker driver signalling to motorists to steer clear, but before I could say Jack Robinson, the tanker was on its side falling on all vehicles beside it.

“Immediately the tanker fell, fire started and incinerated all vehicles along its way,” he said.

The rescue team of the Federal Road safety corps arrived around 10 am with an Ambulance from Rescue/rehabilitation to evacuate the corpses burnt beyond recognition while locals made frantic efforts to identify them.

However, the Kogi State Sector Commander of the Federal Road Safety Corp,Idris Fika Ali disclosed that a tatal of 23 persons were killed in the explosion while one child escaped with injuries

According to him, 10 vechiles where involved, 5 cars, one tanker, 3 tricycles and 2 motorcycles, stressing that some family had retrieved the victims .

Ali said the corpses of other victims had been deposited at the specialist hospital in Lokoja.

Meanwhile, the Kogi State Governor Alhaji Yahaya Bello has expressed shock and sorrow over the fatal tanker explosion’ in Lokoja , the State Capital

A statement issued immediately after the incident, by the chief press secretary to the governor, Onogwu Mohammed, said that
“Governor Bello is very sad to learn of the tragic loss of lives, many vehicles, property and other valuables in the petrol tanker fire while expressing his deepest condolences to the family of those affected by the ugly occurrence.

The governor said this is sadly the greatest tragedies the state has witnessed in recent times while describing the unfortunate accident as a sad development and shares the feeling of those who lost their loves ones in this incident.

He also urged the students of Kogi State Polytechnic to remain calm and peaceful, stating that he equally shared in their grieving moment over the death of some of their colleagues in the disaster.