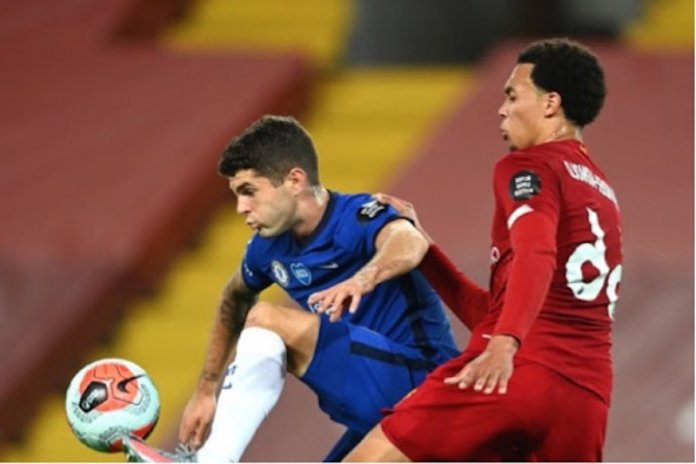 The Premier League season continues this weekend with the first full schedule of fixtures as the Manchester teams-United and City, Aston Villa and Burnley return to action. The standout fixture sees big-spending Chelsea host champions, Liverpool at Stamford Bridge tomorrow as both sides look to build on opening-day victories

Chelsea host Liverpool in an intriguing Premier League battle on Sunday with both teams looking to make an early statement of intent.
The two sides enter tomorrow’s game having won their respective opening day fixtures, with Chelsea beating Brighton 3-1, while Liverpool edged past newly-promoted Leeds 4-3 in a thrilling affair.

Neither team were entirely convincing, however, with Kepa Arrizabalaga’s blushes saved by a Reece James thunderbolt, while Liverpool secured the win with an 88th-minute penalty, Mohamed Salah’s third of the game.
Both managers could be set to hand out debuts, with Chelsea summer signing Thiago Silva fit to play, while Liverpool announced the signing of Thiago Alcantara on yesterday.

Meanwhile, one of Lampard’s new signings, Timo Werner is gunning for Liverpool and knows that Chelsea have to win on Sunday at Stamford Bridge if they are going to challenge for the Premier League title.
The Blues finished fourth, 33 points behind the Scousers last season, and Werner, 24, who cost the Blues £45million from German outfit RB Leipzig is confident he will score goals and see his new club challenge for the top spot.

Liverpool were odds on to nab the striker in the summer, but the power of persuasion from manager Frank Lampard and technical advisor Petr Cech changed his mind.
He said: “When I decided to leave Leipzig I spoke to other clubs, but I decided to come to Chelsea. It was a hard decision but I’m happy to come here, it feels right.
“Frank Lampard explained to me the system Chelsea will play, and that it will fit my style of football.
“I hope to win titles at Chelsea, that is obvious. Chelsea is a big club who always wants to win, like me. We have a strong and young team that can develop.

“I’m looking forward to playing Liverpool. There are a lot of good teams in the league but Liverpool are one of the best in the world. It will be a good challenge to show how far we have come. But we will improve. We will try to win the game, but the whole of Liverpool’s defence is good.
“We also have great players and we have the quality to beat them. They had a better pre-season than us but we can run, run, run.”

The striker understands that it won’t always be easy to play against top defenders. He said: “I think I will get a lot of space where I can run into, but it will depend on the game. I may have to adapt and that will take a few games.”
Meanwhile, Manchester United get their 2020-21 campaign belatedly underway when they welcome Crystal Palace to Old Trafford on this afternoon.

Just over a month after their 2019-20 season finished in the Europa League semi-finals, Ole Hunnar Solskjaer’s side are back in competitive action a week later than most teams, including Palace, who began the campaign with a 1-0 win over Southampton. Even with the additional week afforded to those who reached the latter stages of Europe last season, this is a quick turnaround for a United side whose summer break will have lasted just one month and three days.

The true significance of that may not been known in full until the majority of the season unfolds, but Solskjaer will know that his side needs to hit the ground running immediately.
A third-placed finish last season means that their main goal for the upcoming campaign is to close the gap on the top two of Liverpool and Manchester City, as well as building on an encouraging second half of 2019-20.

Indeed, the Red Devils begin their new season with the longest ongoing unbeaten streak in the Premier League, having ended last term on a 14-game run without defeat which stretches back to January.
The form of the likes of Bruno Fernandes, Marcus Rashford, Anthony Martial, Paul Pogba and Mason Greenwood drew particular praise during that time, but there is still a feeling among fans that they need to strengthen more this summer.

The transfer window began with understandable excitement as United were linked with a host of star names – most notably Jadon Sancho – but Donny van de Beek is the only new name through the door in time for the new season.
The Red Devils appear to have missed out on Sergio Reguilon. Gareth Bale and Thiago Alcantata to Premier League rivals, while the Sancho saga rumbles on, and when you throw captain Harry Maguire and Greenwood’s off-field troubles into the mix as well, it has not been an ideal summer for the 20-time champions.

Matters on the pitch could have been better too, with a 1-0 defeat to Aston Villa in their only pre-season contest.
The hosts will be favourites going into today’s match, but they will also be wary of the fact that one of their two home defeats in the league last season came at the hands of this weekend’s opponents.
That memorable Old Trafford triumph is the only time Palace have ever beaten United in the Premier League era, though, so if the Eagles are able to come away with a positive result again today then it would be an achievement of some significance.

However, Manager Roy Hodgson will certainly believe that his side can do it; they beat Southampton on the opening day of the season to get off to a winning start, despite the stats suggesting that away specialists Southampton went into the game as favourites.
Star player and former United winger, Wilfried Zaha is showing signs of getting back to his best after an underwhelming campaign last term, and the club appear to have addressed their lack of goals in 2019-20 by re-signing Michy Batshuayi on loan.

The Chelsea man made his second debut for the Eagles in midweek but drew a blank as Palace were ultimately dumped outof the EFL Cup by Championship side Bournemouth following a remarkable penalty shootout.
Palace will have no fears about going back out on the road again, though; they won more away league games last season than both Tottenham Hotspur and Arsenal and will fancy their chances of causing United problems on the counter with their quick attackers.