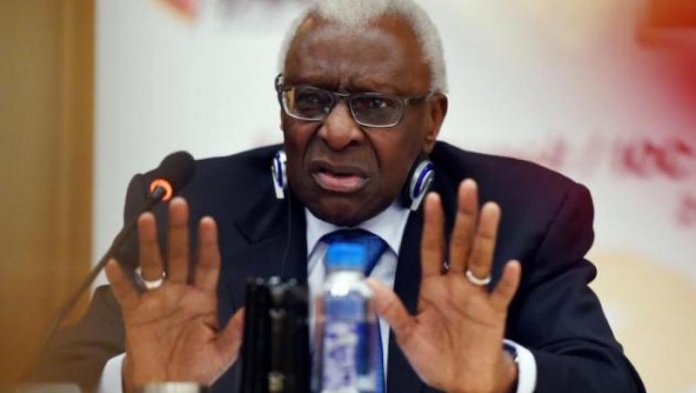 Lamine Diack, the ex-head of athletics’ governing body, has been jailed after being found guilty of corruption.

The Senegalese, 87, faced corruption and money-laundering charges linked to the Russian doping scandal.

Diack was convicted of accepting bribes from athletes suspected of doping to cover up test results and letting them continue competing, including in the 2012 London Olympics.

He was sentenced to four years in prison, two of them suspended.

Diack’s lawyers said he would be appealing against the judgement, which they called “unfair and inhumane”.

Diack, who was also given a maximum fine of 500,000 euros (£456,928), was investigated by French authorities for four years over claims he took payments of more than 3m euros to cover up cheating.

The judge said his actions had “undermined the values of athletics and the fight against doping”.

Diack has been under house arrest in Paris since November 2015.

Previously one of the most influential figures in world sport, Diack was president of the International Association of Athletics’ Federations – now World Athletics – for 16 years until he was replaced by Britain’s Lord Coe in August 2015.

Before the judgement yesterday, Papa Massata Diack had addressed a press conference in Dakar, Senegal where he claimed himself and his father were the victims of an “Anglo-Saxon conspiracy”.

He criticised the French authorities prior to the verdict in their corruption trial.

Papa Massata further claimed he opted not to travel to France as the courts in the country “lack impartiality”.

“To submit to French justice is to put myself at the disposal of my enemies,” Papa Massata, who remains under an international arrest warrant issued on February 13, added.