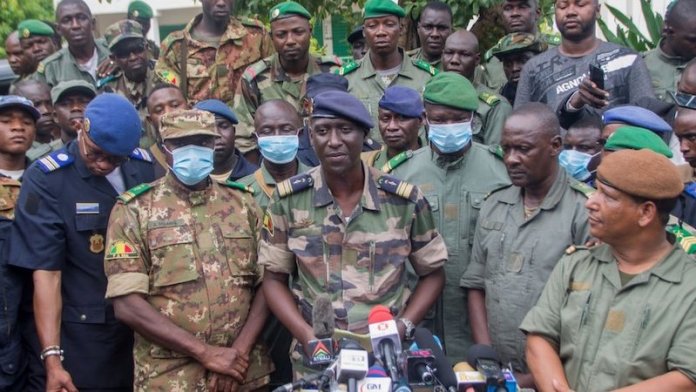 Mali’s new military leaders have finally agreed to establish an 18-month transition government until an election can take place, following last month’s coup, BBC reported last night.
Spokesperson Moussa Camara said the interim government would either be led by a military officer or a civilian.

His former chief of staff said he could be away for up to 15 days.
After the coup, West African leaders said they wanted a rapid return to civilian rule. Mali’s new military rulers had previously said they wanted the interim period to last for two years.

“We make a commitment before you to spare no effort in the implementation of all these resolutions in the exclusive interest of the Malian people,” Col Assimi Goita, the head of Mali’s military junta, said.
President Muhammadu Buhari alongside other ECOWAS leaders had earlier demanded for the composition of a transition government in Mali, led by civilians, as well as the return of the country to constitutional government within the next 12 months.

The demands of both Buhari and ECOWAS were made at a virtual Extraordinary Summit of ECOWAS Heads of States and Governments on the socio-political crisis rocking Mali.
According to a statement then by the president’s media adviser, Femi Adesina, Buhari harped on briefings by ECOWAS’ Special Envoy, former President Goodluck Jonathan, saying it showed that the regional body’s engagements with the new military leadership in Mali were yet to achieve the desired results in several key areas.

However, the president was swift to add that he was happy to hear the news of President Ibrahim Boubacar Keita’s release from detention, adding that the preparedness of the military rulers to free other detainees is welcome.

President Keïta was overthrown on 18 August following mass protests against his rule over corruption, the mismanagement of the economy and a dispute over legislative elections.
The coup sparked international condemnation, but it was welcomed by many Malians.
Mr Keïta was detained by the military, but later freed.
This was the fourth coup in the West African state since it gained independence from France in 1960.

A previous coup in 2012 led to militant Islamists exploiting the instability to seize territory in northern Mali. French troops helped regain territory, but attacks continue.
The coup leaders earlier promised to respect international agreements on fighting jihadists.
Thousands of French, African and UN troops are based in the country to tackle the militants.