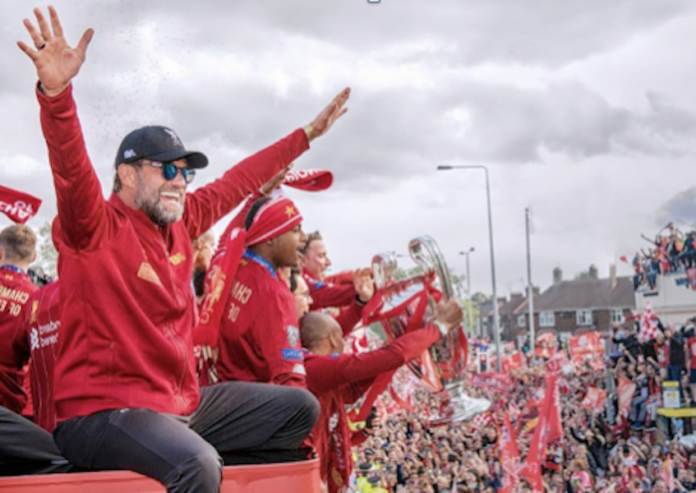 Last season’s winners, Liverpool will host the 2019/20 Championship winners, Leeds on their return to the top-flight for the first time in 16 years. Both sides dominated their respective divisions last season, but the Reds were particularly masterful, as they laid waste all that stood before them in the English top flight. Now they will open the season by facing each other, as Jurgen Klopp comes head-to-head with the godfather of systemic and intense pressing, Marcelo Bielsa, in what is expected to be a riveting contest

Life back in the big time after a 16-year absence could not get off to a tougher start for Leeds, while for Liverpool they will be aiming to get their title defence off to a winning start after ending their 30-year wait to be crowned kings of England.

The memories of last season’s relentless, remarkable and record-breaking charge to the Premier League title will not have faded yet for Liverpool, but the league table has been refreshed and Jurgen Klopp will know that the next race begins in the very first game.

Manchester City and perhaps others will expect to put up a much more competitive fight this time around and so Liverpool will consider themselves back in the 2018-19 mindset, when they knew that any dropped points at any stage of the season could prove costly.

The Reds will also be confident, though, and rightly so given that they won the title with an unprecedented seven games to spare last season and finished a whopping 18 points above a Manchester City side widely regarded to be one of the greatest teams English football has ever seen.

There is likely to be motivation from outside sources too; bookmakers have Man City as clear title favourites despite last season’s one-horse procession, and Liverpool will know themselves that to be considered a truly great team they must now defend their crown – or “attack” the next one, as Klopp likes to say.

A Community Shield defeat on penalties to Arsenal will not cause too much consternation for Liverpool, who suffered the same fate at the hands of Man City prior to the 2019-20 campaign, and also like last season they will begin with a home match against the winners of the Championship.

Norwich City visited Anfield on that occasion having stormed to the Championship title with one more point than Leeds managed last season, and the Canaries caused problems despite ultimately falling to a 4-1 defeat.

Leeds will be hoping that a similar fate does not await them both in this game and in the season as a whole, and they at least know that matchday one is about as difficult as it gets.

Liverpool are unbeaten at Anfield since April 2017 – a run of 59 matches and incredibly have won 25 of their last 26 on home turf, the only exception being a 1-1 draw with Burnley in July which ended the longest home winning run in English top-flight history at 24.

It is a formidable record, but Marcelon Bielsa may feel that matchday one, when his side are still buoyant from their promotion and fired up for their first game back in the Premier League since 2004, is as good a time as any to face the champions away.

The visitors certainly have a good record on the opening day, having played more games on matchday one without losing than any other team in Premier League history, winning five and drawing seven of their previous 12.

Leeds also ended last season in fine form and arrive on Merseyside with five wins from their last six away games, although there is only a certain amount you can read into that given that those games came at a different level.

Nonetheless, the Whites will feel that they are well equipped to compete in the top tier, particularly after bringing in proven international quality with the likes of Rodrigo Moreno and Robin Koch.

Add to that the Bielsa factor – and that he has now confirmed he is staying at the club – and Leeds are very much a promoted team that much of the division will be wary of facing.

Leeds will at least be confident of scoring, with Liverpool having kept just one clean sheet in their last nine outings including pre-season, which has seen them beat Stuttgart and Blackpool but draw with Red Bull Salzburg and lose to Arsenal on penalties.

Not since April 2001 have Leeds beaten Liverpool – a run of eight matches which includes six Liverpool wins and two draws – while their most recent visit to Anfield ended with a 2-0 League Cup defeat in 2016.

Meanwhile, Arsenal get the 2020-21 Premier League campaign underway with a trip to London rivals Fulham this afternoon.

The Gunners ended last season on a high after lifting the FA Cup, while Fulham also bring momentum into the new campaign following their promotion from the Championship.

The 2019-20 season will ultimately go down as a successful one for the Gunners thanks to that triumph, but a lot more is expected of them in the Premier League this time around.

Last term’s eighth-placed finish was Arsenal’s lowest since 1995, not helped by a return of four wins in their opening 13 fixtures, which they ultimately failed to recover from.

Arteta took over from Unai Emery midway through the season and, while results were largely mixed, the former Manchester City coach did not take long to make his mark on the field.

Arsenal played some impressive football at times and have carried that into this season, having already defeated champions Liverpool on pens in the Community Shield two weeks ago.

That may be little more than a glorified friendly to many, but it showed once again that the Gunners are now capable of holding their own against the division’s top sides.

That is not exactly a category opponents Fulham fit into, of course, with the Cottagers preparing for their first season back in the top flight after a one-year absence.

A 2-1 win over bitter rivals Brentford on August 4 sealed a spot in the top division and Parker will now get his first proper shot at keeping Fulham in the division.

The Cottagers have played just one friendly since then, drawing 2-2 with MK Dons at the end of last month, despite Parker fielding a strong XI in the behind-closed-doors clash.