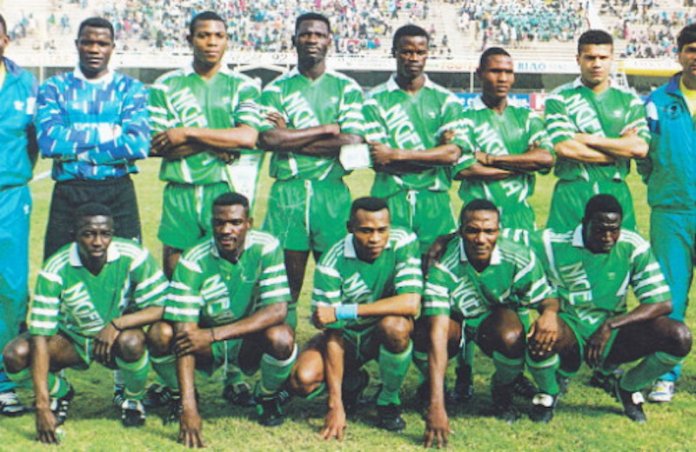 Africa Cup of Nations (AFCON’92) bronze medal winner with the Super Eagles, Ajibade ‘Kunde’ Babalade, 48, died of cardiac arrest last Friday in Ibadan. Ex-international, Mutiu Adepoju, who elevated Babalade to the position of Team Manager at Shooting Stars, here recalls their time together at the senior national team as well as the Oluyole Warriors. Headmaster, as Adepoju is fondly called, spoke with DURO IKHAZUAGBE…

It first started as a rumour that early Friday morning that Ajibade ‘Kunde’ Babalade had passed on. Calls to several contacts in Ibadan could not authenticate the ‘hot news’ that the former hard-as-nail defence strongman had actually died. It was not until midday that confirmation came from another ex-international, Ike Shorunmu, that ‘Kunde’ died of cardiac arrest on the way to the University College Hospital (UCH) in Ibadan.

Babalade joined the growing list of Nigerian footballers (current and retired) who died of cardiac arrest. The list include: Samuel Okwaraji, Amir Angwe, John Ikoroma, BobSam Elejiko, Endurance Idahor, Orobosa Adun and the most recent in the domestic league, Chineme Martins of Nasarawa United. There are several that cannot readily come to mind now before this painful exit of this ex-Shooting Stars, ex-Stationery Stores, ex-Iwuanyanwu Nationale’s Babalade.

With professional stints in Korea with Anyang LG Cheetahs and SK Stum Graz in Austria, Babalade did not come as someone not fit or having underlying ailments.

Speaking with THISDAY at the weekend, ex-international Mutiu Adepoju described the exit of Babalade as very painful.

“Ajibade’s death is very painful to everybody. It is painful as colleague, a friend and a footballer. We are going to miss him,” began the former Super Eagles midfielder who elevated Babalade to the position of Team Manager at Shooting Stars of Ibadan.

Though Babalade was not Adepoju’s contemporary at Shooting Stars during their playing time at the Oluyole Warriors, their paths however crossed as administrators.

“Actually we didn’t play together in Shooting. I played earlier before travelling to play professional football in Spain.

“It was at Africa Cup of Nations in Senegal in 1992 that we played together in the Super Eagles,” observed Adepoju who played seven seasons in the Spanish topflight with Junior Real Madrid, Racing de Santander and Real Sociedad.

“I played against him when I was in Julius Berger and he was playing for Stationery Stores at that time. As a player, Ajibade was a very strong and rugged defender.”

It was when Adepoju returned from his sojourn in Spain that they met at Shooting Stars.

“We met again at Shooting Stars when I returned and was appointed as the General Manager. I was the one that made him the Team Manager of Shooting Stars. He was the Camp Commandant then when I came but elevated him because I knew his worth and value he was going to add to Shooting Stars as Team Manager.

“We had a great time running the club. We had great moments at Shooting Stars,” he noted further.

On the rise of cardiac arrest cases amongst footballers in the country, Adepoju urged past and present sportsmen and women to intensify constant health check ups as a way to prevent dying from unexplained situations like cardiac arrest.

“Yes, cardiac arrest is becoming a recurring decimal in Nigerian football. What we need to do to stem it whether as current or ex-footballer is that we need to take extra look at how we manage our health situations.

“We need regular medical check ups to ascertain there are no hidden health issues that may result in deaths like we are witnessing in our football now.

“Secondly, once we are sure of our health conditions, regular work-outs are necessary to prevent being obese and adding unnecessary flesh. We don’t need to ignore our health after we retire from active sport,” Adepoju warned.

He however remains optimistic that Shooting Stars will return to reckoning in the country’s club football.

“Shooting Stars will return big time because the present Governor of Oyo State, Seyi Makinde, is giving the right attention to sports matters in the state. “This is consequently rubbing on Shooting Stars.

“It was just unfortunate that the last NNL season was truncated by the Covid-19 pandemic. Shooting Stars was already picking up by the time the season was stopped in December. Perhaps, Shooting Stars would have made it back to the topflight NPFL. It is just a matter of time, Shooting Stars will be back to where they rightly belong in the country’s club football,” concludes Adepoju, who is LaLiga ambassador in Nigeria.