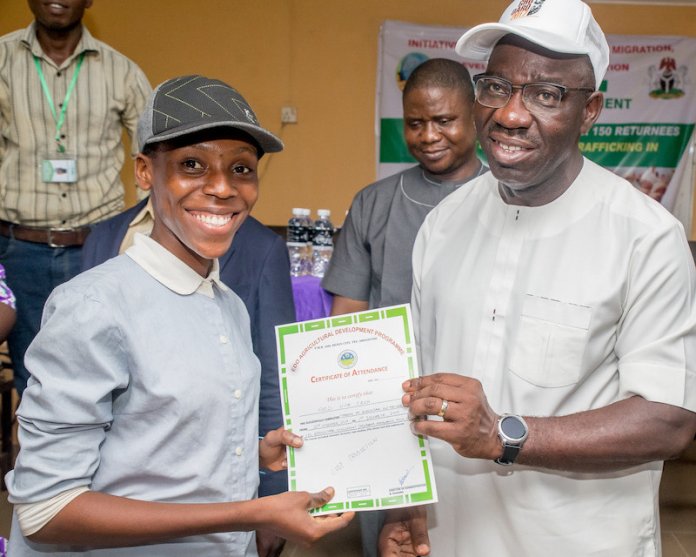 Chiemelie Ezeobi writes that in tackling the menace of human trafficking in Edo State while rehabilitating and reintegrating those rescued, Governor Godwin Obaseki is restoring dignity to the vulnerable and abused

Building societies can very well be about setting the brick and mortar, building critical infrastructure to drive growth. But much more than that, it is also about creating a society that has a soul, that feels and breathes life and solves its problem as it rides up the ladder of progress.

In the last three years and nine months that the Governor Godwin Obaseki-led government has held sway in Edo State, it has sought and found the soul of state, restoring the dignity of people who were neglected for years were caused to make hard choices because of bad governance foisted on them by previous governments that had neglected its core functions for other pecuniary gains.

This is made evident in Governor Obaseki’s reintegration and rehabilitation programme for returnees,many of whom were stranded in Libya, European countries and other parts of Africa.

At least well over 6,000 returnees have been received by the state government. On arrival, the
returnees were provided with initial accommodation before reintegrating with

their families, while others found solace in the entrepreneurship and farm initiatives of the state government.

To set the ground work for this and working in collaboration with the Oba of Benin palace, the
governor set up the Edo State Taskforce Against Human Trafficking (ETAHT) enabled by the Edo State Trafficking in persons Prohibition Law (2018), which provides an effective and comprehensive legal and institutional framework for the prohibition, prevention, detection, prosecution and punishment of human
trafficking and related offenses in Edo State.

On August 15, the state government received and reintegrated 18 indigenes of the state, made up of 17 young girls and a year-old male child, who were stranded in Mali. This was in addition

to the over 5,000 returnees that were received from Libya alone between 2017 and date.

In ensuring that the returnees were fully reintegrated into the society and kept busy, the state government in collaboration with the International Organisation for Migration

(IOM) opened a pineapple factory operated by a business cooperative, consisting of returnees and unemployed youth, and the private sector. It is part of the IOM’s integrated approach to sustainable reintegration.

The facility employed 42 Nigerian returnees and local youth. Those employed at the factory received technical and vocational training under a project funded by GIZ. It’s the first community-based reintegration project to launch in Nigeria and, besides the direct hires, will benefit 250 individuals, their families, as well as farmer
associations and residents of Iguobazuwa, Edo State.

In addition to the pineapple processing factory, another cassava factory was launched in the town
of Ehor, Edo State, providing job opportunities for 25 returning migrants and youth, and indirectly benefiting 150 individuals in the community.

The plant aims at involving returning migrants in income-generating activities together with their home communities, to promote inclusive local development while also reducing socio-economic challenges.

Since April 2017, some 16,102 stranded migrants, including 1,200 victims of trafficking, have
voluntarily returned to Nigeria as part of the EU-IOM Joint Initiative for Migrant Protection and Reintegration. Thirty-five per cent of these returnees cite better employment opportunities as their main reason for leaving.

Community-based reintegration complements the existing individual and collective reintegration
modalities and addresses the structural issues of unemployment and social cohesion in the country.

Receiving the latest batch of returnees on arrival in Benin City, the state Attorney General and
Commissioner for Justice, Prof Yinka Omorogbe, said the returnees comprised irregular migrants and victims of human trafficking.

Omorogbe said the Governor Godwin Obaseki-led administration has in the last three years and
eight months stemmed the scourge of illegal migration through massive investment in the education sector, in addition to creating various empowerment programmes for the youths.

According to her, “we have just received 18 Malian returnees into the state. These are girls that were trafficked out of Nigeria to Mali where they were rescued. They spent some months with the High Commission in Mali before being transported back to Nigeria.

“A plane-load of girls arrived in Nigeria from Mali; among these people are 18 persons; including 17
young girls and a baby boy that is either from Edo State or reside in the state.”

The commissioner reassured the commitment of the state government to the welfare and wellbeing of the returnees, noting that over the years the government has ensured the
rehabilitation and reintegration of the returnees by assisting them to acquire skills through training and retraining programmes as well as the provision of loans and payment of stipends for start-ups.

She added: “The Edo State Task Force Against Human Trafficking, as usual, brought them back to Benin. Ever since we started operations in early November 2017, the task force has been on the ground to receive every Edo indigene brought back into the country.

“These people just returned and we have taken and stored their information in our database; they
will be incorporated into our numerous programmes initiated by the Obaseki-led
administration to make them independent and employable.”

Coincidentally, Omorogbe, who is also the Chairman of Edo State Taskforce Against Human
Trafficking (ETAHT), had earlier disclosed that the Governor Obaseki-led government has so far spent N300million for the upkeep of the returnees and other logistics within the period, adding that the achievements have corrected the wrong perception earlier held by the international community about Edo State.

“Our efforts in Edo State have been acknowledged internationally. If you look at the trafficking in persons before 2019, you will realise that copious references were being made to Edo State and there is no doubt that this was the reason the state in that report was upgraded because they saw our great efforts and they realised the different things being done in the state,” she added.

The Special Adviser to the Governor on Media and Communication Strategy, Mr Crusoe Osagie, recently gave the state government’s assurances that the permanent shelters being constructed to accommodate returnee Edo indigenes, who were trapped abroad as victims of human trafficking and irregular migration, will strengthen the state
government’s rehabilitation and reintegration programme.

Osagie said the facilities would enable the state government fast-track short, medium and
long-term objectives of rehabilitating and reintegrating the returnees.

He noted that the shelters would support the state government’s far-reaching approach to
providing support for returnees, which includes medical screening, payment of stipends, capacity building and provision of starter-packs, reunion with families and regular monitoring and follow-ups.

A Professor of History and International Studies, who is also Dean of Students’ Affairs at the
University of Benin, Benson Osadolor, had also recently called for national policy intervention, youth civic engagement, and mind management for creativity as effective measures to address youth migration.

It is in furtherance of this that the state government sought the partnership of the Nigeria
Immigration Service (NIS) to provide succour to returnees from Europe who are indigenes of the state. Governor Obaseki had specifically requested the NIS to provide accurate statistics of returnees to enable the state plan effectively.

A beneficiary and returnee from Libya, Rescue Esosa, said she was glad to return home and
reintegrated into the society.

“I am glad to return home and start my life again in Nigeria after all the troubles I went through
in Libya in search of greener pastures. The pain and experience I went through in trying to cross over to Italy were unbearable. I lost my friends to the desert and some at sea. I’d rather stay and invest in my country than risk my life in the hands of smugglers. I am glad to have something doing now,” she said.

A physically challenged returnee from Libya, who has established a tailoring outfit in Benin City, Frank Obeahon, also recalled that people travel out due to lack of jobs.

He, however, said getting something to do in one’s father’s land was better than traveling
abroad because some people die in the process of trying to migrate illegally.

“The truth is that people consider traveling out of the frustration they are facing in the country. If they are engaged through employment, a lot of people will jettison the idea of traveling out for greener pastures. Traveling through these
routes is an issue of life and death and the chances of getting to the destination are 50-50 because a lot of people die in the process,” he said.

Other states could key into the initiatives of the Edo State government to cushion the sufferings of Nigeria returnees from abroad.