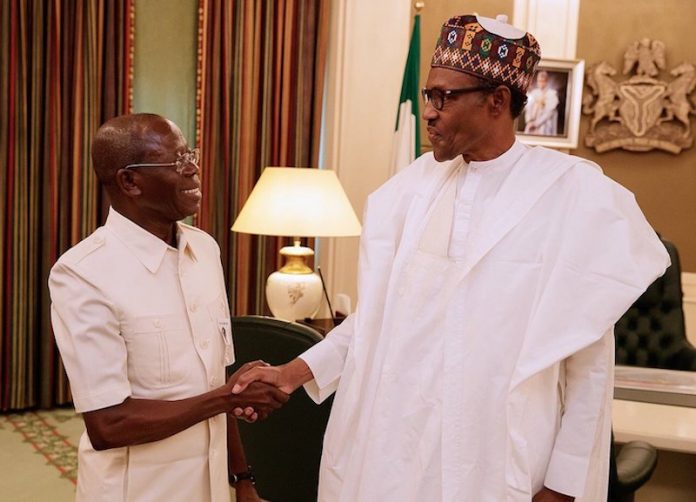 Ousted National Chairman of the All Progressives Congress (APC), Mr. Adams Oshiomhole, yesterday met with President Muhammadu Buhari at the State House in Abuja, where he called for the deployment of more security agents in Edo State for the September 19 governorship election.

He also dismissed the allegation that he was plotting a comeback as the national chairman of the ruling party and wondered why he would seek to return to the office at the age of 68.
He described those accusing him of plotting his return as empty brains and cowards who lack the courage to reveal their identities.

Yesterday’s visit was the first time Oshiomhole would come to the State House since June 16 when the Court of Appeal, sitting in Abuja, upheld his suspension, triggering a flurry of events that led to the sacking of the APC National Working Committee, headed by him.

Oshiomhole, while answering questions from State House correspondents after a meeting with Buhari said he came to renew his loyalty to the president and also update him on efforts being made to reclaim the state.
He added that during the meeting, he implored Buhari to deploy more security forces in the state to avert violence as the September 19 poll draws nearer.

He said given the support the APC had so far received for its campaign, it was sure of winning the election.
On his alleged plans to reclaim the APC national chairmanship, Oshiomhole said he would not dignify his accuser, Dr. Salihu Lukman, the director-general of the Progressives Governors’ Forum (PGF), with a response.
He said he would not engage in a pig fight with Lukman, whom he said was allegedly imposed on the PGF by the Chairman of Nigeria Governors’ Forum (NGF) and the Governor of Ekiti State, Dr. Kayode Fayemi.

Lukman, in a recent statement, had alleged that some unscrupulous forces within the ruling APC had been strategising to ensure the return of Oshiomhole to the party’s national chairmanship.
According to him, such forces are seeking to deploy every power within their reach to manoeuvre and manipulate the system to pave the way for Oshiomhole to stand for election at the forthcoming national convention of the party and foist him on the party.

He had said: “In other words, everything is being done to ensure that the internal politics of the party is manipulated to create situations whereby Oshiomhole is forcefully made a contender for the position of the national chairman at the extraordinary APC national convention.”
But Oshiomhole dismissed the allegation yesterday, wondering why he would seek to return to the office at the age of 68.

He wondered if the essence of such a return bid would be to resit an examination.
Apparently accusing some governors of APC of being Lukman’s sponsors, Oshiomhole described such highly placed individuals as cowards who are afraid of coming out to attack him.
He stated that asking him to respond to what he described as “the noise” being made by Lukman and his principals was dragging him into a pig fight.
He added that he would not descend so low because he has a pedigree, which transcends being the national chairman of APC.

He also described Lukman as a failed politician, adding that taking issue with him will amount to descending to his level.
Oshiomhole said: “You want me to engage in a fight with a pig? If you engage in a fight with a pig, the pig already is stained by its nature and you will wear your white garment, and in my own case, khaki to go and wrestle with a pig? I will not.
“When I was removed as national chairman, Edo was APC. So, do I have to win Edo to become the chairman? Do I look so unemployed?

“I’m 68. So, what they don’t understand is that it is not the office of chairman that made me who I am. It is my pedigree from my days as a labourer in the textile industry to becoming the general secretary of textile workers all over Nigeria and becoming the president of NLC.
“There is no village I go to that people do not know me and it is this that I used to override the godfathers in Edo State for two consecutive terms and even became governor through elections – no violence before becoming the national chairman.

“So, if you remove the office…is like our president now, though I cannot compare myself to him. But it is like President Muhammadu Buhari by 2023, when his tenure would have lapsed as president, but those who believe in him, in 2024 and beyond, each time they see him, that trust they have in him will always be there.

“He bonds with the people. That bond was not created by the fact that he is the president. In fact, he became the president because of that bond. So, it takes an empty brain to suggest that I only want to stage a comeback to become the national chairman. For what? To go and do a resit?

“So, my attitude is not to reply to the noise and it is coming from somebody who says he is an employee and appointee of Progressive Governors’ Forum. He is just like the cowards that are using him that are not able to come out. Otherwise, you should ask this guy who is now an election expert.

“He contested for Senate against (Senator Ahmed) Makarfi. He lost. He even contested against Governor (Nasir) el-Rufai during the primaries and he lost before Fayemi unilaterally appointed him the DG.
“So, if he is now the spokesman, abusing me and all of that, you want to drag me to his level? No! A gentleman does not wrestle with a pig. If you do, you will always be stained and I don’t want to get into that,” he said.

The 17 lawmakers of the Edo State House of Assembly loyal to Oshiomhole are billed to reconvene today.
They said yesterday that there was no going back on their decision to sit today, adding that they were legitimately constituted.

The lawmakers had last week sat at an undisclosed location because they alleged that hoodlums had taken over the state assembly complex.
They had also accused the state government of removing the roof of the chamber and dumping granites and sand at the entrance to prevent them from gaining entry.

One of the resolutions reached by the lawmakers was that the police should evacuate the hoodlums whom they alleged had taken over the legislative complex.
But yesterday, the 17 lawmakers told THISDAY that the police were yet to comply with their resolution.
One of the 17 members, and a member, representing Uhumwonde State Constituency, Hon. Washington Osifo, told THISDAY that they will still sit whether in or out of the legislative complex.

He decried the inability of the police and other security agencies to flush out the hoodlums and provide security for them in compliance with the letter written by the Attorney-General of the Federation and Minister of Justice, Mr. Abubakar Malami, to the Inspector General of Police, Mohammed Adamu.
Their speaker, Hon. Victor Edoror, expressed shock that the hoodlums were still at the assembly complex despite their directive to the police and other security agencies.
He said: “I am surprised that in spite of the resolution in our last meeting to the police, the hoodlums are still there.

“I am not in Benin right now but will be back later in the day. When I come back, I will go and take an on-the-spot assessment of the complex and know the next line of action.”
Efforts to get the police’s reactions proved abortive as the relevant officers contacted did not pick their calls or respond to text messages.

The state police command had earlier pledged to be neutral in the political crisis rocking the state, which arose from the disagreement between the Governor, Mr. Godwin Obaseki, and Oshiomhole, his predecessor.
The 17 lawmakers comprise five that were hitherto in the governor’s camp, who were joined by 12 others that were surreptitiously sworn-in two weeks ago, more than a year after those loyal to the governor were inaugurated.

The speaker of the faction loyal to the governor, Hon. Frank Okiye, had earlier declared the seats of the 12 lawmakers-elect vacant.
The governor had played down the 17 lawmakers’ action, saying the decisions arising from any of their sittings would not be binding on him and the state government.