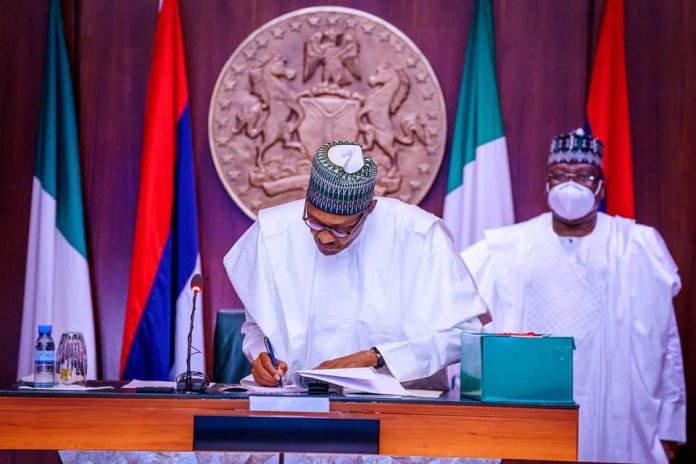 Abdulsalam Mahmud argues that as an act, it will assist in blocking revenue leakages and curtail corruption

There are several benefits to be derived by the time President Muhammadu Buhari finally appends his signature to the “Federal Audit Bill”, passed by the National Assembly (NASS). The Eight Senate, in May 2018, passed a bill for the establishment of the Federal Audit Service Commission, in line with the administration’s anti-corruption fight.

The bill was read the third time and passed at a plenary session presided over by then President of the Senate, Bukola Saraki. The Senate mandated its leadership to engage the executive with a view to getting Buhari to sign the bill before the end of the Eight NASS.

Chairman of the Senate Committee on Public Accounts (then), Matthew Urhoghide, while presenting his report, said: “This Bill is very important to the nation as passing it into law will form the bedrock for fighting corruption, which is one of the cardinal objectives of Mr. President’s administration. It will empower the Office of the Auditor-General of the Federation, who has the constitutional mandate of auditing all accounts of the federation to nip corruption in the bud, ensure transparency in government transactions.” Urhoghide added: “The Bill will address acute manpower shortage, existing in the Office of the Auditor-General of the Federation and bring it in tandem with supreme audit institutions and international best practices, as obtained in other climes such as South Africa, Ghana and the United Kingdom.”

The Audit Bill, for the record, was first passed by the House of Representatives in April 2016, and transmitted to the Senate for concurrence. The Senate passed the bill on Thursday, March 1, 2018. But due to disparities in the version passed by the two chambers, a conference committee was set up to reconcile areas of differences. The bill was eventually harmonized and passed by both chambers. The harmonized copy was forwarded to Mr. President for assent on January 8, 2019.

Sadly, the Audit Bill has since become orphaned, two years after its passage by NASS. The bill was prematurely ‘murdered’ by the refusal of Mr. President to give it his assent. The bill, among other things, will greatly assist in blocking revenue leakages and curtail corruption, when it finally becomes a law.
Non-Governmental Organisations (NGOs) such as Connected Development (CODE), have always been in the vanguard of anti-corruption. It has since kick-started an online campaign, soliciting Nigerians to sign a petition, with a view to pressuring the government into assenting to the Audit Bill.

CODE, noted that the Office of the Auditor General for the Federation (AuGF) plays a vital role in public financial management and anti-corruption measures, especially by ensuring compliance with financial rules and regulations and due process in public expenditure.
While calling on President Buhari to assent to the Audit Bill, the NGO, said the passage of the bill will be a major feat in the fight against corruption, and would ensure that MDAs submit their yearly audited financial accounts to the AuGF.

Similarly, both the Senate and House of Representatives Public Account Committees, have insisted that the Audit Bill that was passed in the Eighth Assembly, which Buhari did not assent, remains very sacrosanct and would be resuscitated by the Ninth Assembly.
Chairman, Public Account Committee of the Senate, Sen. Urhoghide and his House of Representatives counterpart, Hon. Busayo Oluwole-Oke, who co-chaired a session of stakeholders on the Audit Bill, said the Ninth NASS will breathe a new life into the bill and ensure its passage again.

Both Sen. Urhoghide and Hon. Oluwole-Oke lamented that the nation’s current audit practice does not meet the global best practices, and that necessary reforms that would empower and enable the office of the Auditor General of the Federation to function optimally and efficiently are imperative.

They spoke at a three-day stakeholders consultative/technical session on the Audit Bill organized for members and staff of the Senate, House of Representatives Public Account Committees, and the Office of the Auditor-General of the Federation (OAuGF) in Abuja, last October.
At the session, Urhoghide, noted: “We have to ensure proper auditing of the spending of public money. If we strengthen the office of the Auditor-General, it will block leakages and we will save a lot of money and this will also check corruption drastically.
“Unfortunately, the President withheld his assent even without giving reasons. Now the bill is dead constitutionally. But we shall resuscitate it since our House rules give us provision to start from where we stopped in the Eighth Assembly,” he pointed out.
National team leader, Engaged Citizens Pillar of DFID’s Partnership, Dr. Adiya Ode, during the auspicious session, noted that having the audit law in place would strengthen the auditor general to perform his functions well, and also send signal to corrupt people that they would be exposed and prosecuted.

Experts and scholars in their various presentations during the technical session, equally maintained that without the audit law in place, it might be very difficult to achieve thorough auditing and that the nation’s revenue would continue to leak, particularly in the government agencies that generate revenue for the nation.
It is incontrovertible that the absence of an audit law has given rise to impunity in the use of public resources in several MDAs. This is evidenced in the limitless numbers of probes conducted on key agencies of government, which completely indicted them of malpractices of different sorts.

The absence of proper auditing in the MDAs is also responsible for the fusion of unwarranted projects in the budget of most MDAs. Projects are not subjected to either procurement, financial or performance audits. It is therefore incumbent on the President Buhari-led government to activate every necessary mechanism that will bolster its anti-graft fight.

The country direly needs a robust, and well- articulated audit law that will not only guide accounting officers and other responsible parties involved in the MDAs on the standard procedures in the application of public funds, but will also encourage performance in programmes and budgeting in the MDAs.

That is why Mr. President must once again, diligently re-scan the audit bill, carefully identify grey areas in the current bill, and then facilitate the process for quick harmonization of the perceived grey areas with NASS, before proceeding to sign the bill into law. Having a ‘progressive-defined’ audit law in place will serve as an elixir for his government’s war against corruption.
–––Mahmud wrote from Abuja.