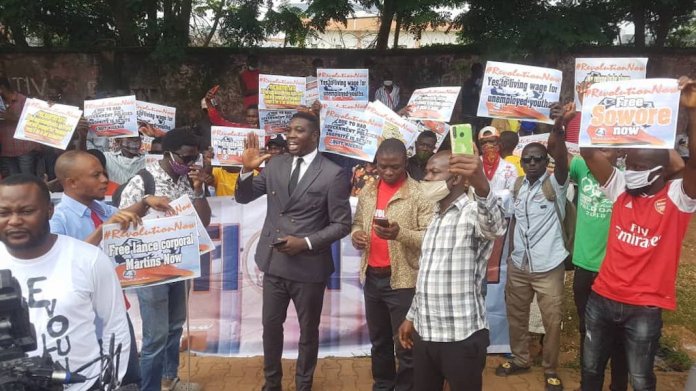 A combined security team consisting of the Army, Police, Civil Defense Corps, and men of the Department of State Services, DSS, a few minutes ago, invaded an ongoing protest by the members of the #RevolutionNow movement, demanding for the freedom of their leader, Omoyele Sowore, currently confined to the country’s capital, Abuja, by government.

THISDAY gathered from an eye-witness simply identified as Oyeduntan, that the combined security operatives waylaid and surrounded the protesters at Berger Roundabout area of the capital territory, and forced them into big buses and the back of security vans.

“The protesters numbered over 50 were all whisked away to an unknown destination, with no one allowed to escape. This has caused serious traffic congestion in the area. And as I am speaking to you, I am trekking to work.”
THISDAY also gathered that the protesters were with several placards expressing their dissatisfaction with the leadership of the country and the continued trial of Sowore.

In what appeared to be a show of force to forestall the breakdown of law, there was an unusual presence of combined team of security forces in virtually all streets of Abuja.

The Transcorp Hilton and Unity Fountain Square were in a lockdown. There was also a heavy security presence in Wuse 2 and Federal Secretariat among other places.

However, THISDAY ran into a group of #RevolutionNow protesters in the Central Business District, Abuja.
The protesters were bearing several placards, condemning the harsh economic and political atmosphere in the country.

One of the conspicuous placards was demanding for the immediate release of Lance Corporal Martins, who has been detained by the Nigerian Army for uploading a video online, criticising the Chief of Army Staff Lt. Gen. Tukur Yusuf Buratai.

The protesters also demanded for the sack of the service chiefs over the worsening security in many parts of the North, while also lamenting the high rate of unemployment in the country.