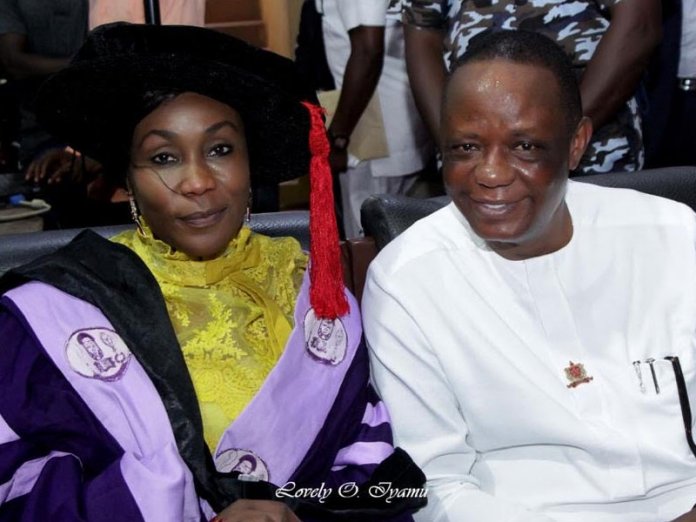 Captain Idahosa Wells Okunbo, fondly called “Captain Hosa” means many things to many people in Edo State and Nigeria generally. Anyone who had come in contact with him will have an interesting recount of the encounter.

In 2018, when Captain Idahosa Wells Okunbo celebrated his 60th birthday in the ancient city of Benin, the event attracted all strata of the society including the ordinary people whose lives he had directly or indirectly touched positively as an individual. The event which was ordinarily to celebrate and appreciate God for sparing his life to that symbolic age of 60, turned out to be like the unveiling of a humanist and God’s special gift to man.

The birthday was an eye opening event, lending credence to the old saying, that a golden fish has no hiding place. The glowing tribute which rented the air at the occasion clearly indicated the fact that he was truly what Chinua Achebe described as “Man of the people” loved by all and sundry.

The event attracted the revered patriarch of Igbinedion dynasty and a traditional title holder in ancient Bini kingdom, the Esama of Bini, Chief Gabriel Osawaru Igbinedion. In spite of his busy schedule, Chief Igbinedion made it to the occasion to honour their illustrious son. Pouring encomiums on Captain Hosa, Chief Igbinedion said, “At 60, you have excelled, conquered, achieved, mature; so I am saying thank you to God almighty. I know how your parents cared for you. You never, never at any moment let me down, keep on son, have a longer life, God will protect you and guide”.

The Governor of Edo State, Godwin Obaseki in his remark described Captain Hosa as “A real patriot, a genuine Bini man, a great Edo citizen, who has accomplished through hard work. His accomplishments are self-made. What is great about him that most people don’t know is that he is very empathetic, he can barely see people in need, languishing or suffering and he’s not pricked to assist”.

Governor Obaseki further described him as “Very kind-hearted, a very pragmatic businessman; a cultural icon and someone who believes in progress, development of other people and the state.”

Captain Hosa availed himself of the opportunity in marking his 60th birthday on February 16, 2018 to organise a public lecture on “Youth migration, consequences and current realities.” The public lecture which attracted men and women from the ivory tower made resounding presentations on the burning twin issues of migration and human trafficking, with the presence of the Director-General of the National Agency for the Prohibition of Trafficking in Persons (NAPTIP), Dame Julie Okah Donli. The lecture did not only go a long way in bringing the ravaging issue of human trafficking and migration to the front burner of public sensitization but also proved his love for a better society, particularly Edo State.

Also, Captain Hosa has remained a formidable individual in partnering with NAPTIP by committing personal resources into the fight against the illicit business of human trafficking and illegal migration by empowering victims of Human Trafficking and support NAPTIP to mark the 2019 World Day Against Human Trafficking.

This is an uncommon display of Captain Hosa’s burning love for humanity, when viewed against the background of many wealthy Nigerians who prefer to live in their comfort zone and cannot voluntarily spare their resources to support the fight to stem the tide of human trafficking, which is a threat to human dignity.

There is no doubt, Captain Idahosa Wells Okunbo has become a reference point as it concerns an individual contribution and impact in NAPTIP’s drive to nip in the bud the danger of illegal migration and human trafficking which is fast becoming the contemporary slave trade. This is where the decision by NAPTIP to honour Captain Hosa as NAPTIP’s man of the year 2020 was a well-placed and laudable decision, especially as it came on the heels of the occasion of the 2020 World Day against Human Trafficking held on Thursday, July 30, 2020.

The occasion provided an opportunity for stock taking and review of strategies in stepping up the fight against human trafficking, deserves the support of all particularly the wealthy individuals and organised private sector. They can borrow a leaf from the kind gesture of Captain Hosa in the fight against the menace.

The NAPTIP award on Captain Hosa was another shining testimony of his contributions to humanity and for the overall wellbeing of a better society. Captain Hosa’s distinguished award did not come as a surprise to many who know his enviable record of selfless philanthropic activities in Edo and across the country.

Born and raised under the strict influence of a very religious family of Reverend Robert Amos Okunbo, a clergy, teacher and community leader in the ancient town of Benin, Captain Okunbo imbibed the virtues of selfless service, humility and discipline in his relationship with his immediate Edo community and in the service to humanity in general.

Having obtained his professional commercial pilot training at age 21 at the prestigious Nigerian Civil Aviation Training Centre, Zaria, Kaduna State; Captain Hosa further proceeded to the ACMB school of Aeronautics, at Forth Texas and became a commercial pilot at age 25.

Moreover, having worked for about 10 years at International Airlines and later Okada Airlines, he successfully logged over 7,000 hours of flight, Captain Hosa voluntarily retired from active service as a pilot at the youthful age of 30. He later launched himself into the murky waters of private business, by incorporating Hoslyn Ventures Ltd. Captain Hosa realised the need to explore the petroleum sector, given the Edo status as an oil producing state, with high stakes of comparative advantage. The company was involved in the procurement of major engineering components for the Warri Refinery Turn Around Maintenance. Hoslyn Nigeria Limited became one of the indigenous companies which participated in carrying out Engineering procurement and construction of contracts in Nigeria. According to Ayo Onikoyi “The company completed and commissioned the early production facility for Nigeria Petroleum Development Company (NPDC) at Ajaoki in Edo State in 2001.”

With the subsequent incorporation of other companies with one interest in marine security, Captain Hosa veered into other ventures covering, agro-allied industry, Telecommunications, banking and power sector.

It is interesting to note that Captain Idahosa Wells Okunbo located these companies in Edo State which provided employment and empowerment opportunities. The reason is simple: as it was a deliberate effort at complementing Edo State government efforts in creating windows of employment.

For instance, with the incorporation of Farm Well Ltd, he ventured into agriculture. He invested millions of dollars with focus on taking off an army of unemployed youths on the streets with a projection of generating 25,000 jobs for the people of Edo State with a capacity to export the produce, thereby contributing to the enhancement of the nation’s foreign reserve and exchange rate.

Captain Hosa’s philanthropic activities did not go unnoticed as the American Congress honoured him in 2012 for his outstanding contribution to peace and advocacy for a fair deal in the Niger Delta.

The American Congress award known as the African Titan Award served as an elixir, spurring him to greater service to humanity. In same 2012, the University of Benin known for its due diligence in giving an award honoured Captain Hosa with an honorary Doctorate degree in recognition of his outstanding contribution to the exclusive club of entrepreneurs and his uncommon fine spirit of community service.

Captain Hosa’s is a peace loving person who believes that no meaningful development can come by without peace and unity of purpose. There is no doubt, Captain Hosa is a special gift to the people of Edo State and humanity in general, and has contributed in no small measure to the socio-economic lives of Edo people and Nigeria as a whole.