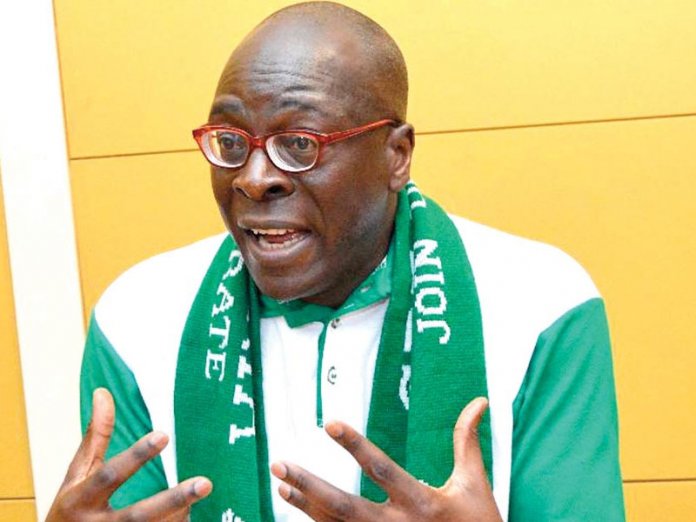 The governorship candidate of the All Progressives Congress (APC) in Edo State, Pastor Osagie Ize-Iyamu, has given reason why he was criticised by the former National Chairman of the party, Adams Oshiomhole, in the 2016 Edo governorship election, saying it was because he was in a different political party then.

Ize-Iyamu who spoke in Benin City at the weekend, said the criticisms were all about politics and nothing that should be taken seriously.

Oshiomhole, who was recently ousted after an acrimonious battle with his protege -turned political enemy, state governor, Godwin Obaseki, had described Ize-Iyamu as a bad choice for Edo people then.

Oshiomhole was captured in different video clips deriding Ize-Iyamu, the then PDP candidate, in a bid to sell the candidacy of his then political ally, Obaseki, in 2016.

“Godwin has worked for the people of Edo using his brain, using his creativity quietly, with the economic team he built using his network of friends without demanding one naira,” he said in one of the videos. He questioned Ize-Iyamu’s education and political background, citing some inconsistencies.

With the exit of the incumbent governor from the APC to the PDP and the emergence of Ize-Iyamu as the APC’s 2020 governorship candidate, Oshiomhole has now retracted his statements on Ize-Iyamu.

He now describes Obaseki as a “bad product” who should not be re-elected by the state electorate.

“Obaseki is MoU (Memoranda of Understanding) governor, but Pastor Osagie Ize-Iyamu is a man of God, who will ensure good governance in Edo State from November 12 this year.

“I have made my honest mistakes. Only God is perfect. I am now 68 years old. I have come to apologise for the mistake of supporting Obaseki in 2016. I am in Edo State to repair my mistakes,” he pleaded as he knelt before some monarchs in the state less than a week ago.

Ize-Iyamu laid bare his relationship with the immediate past APC national and other matters around the forthcoming Edo governorship election.

He said that Oshiomhole’s comment against him in the 2016 campaign ”was nothing but a political gimmick necessary at that point in time”. He cited instances of when the latter praised him after the election.

“Yes, Oshiomhole threw punches at me in 2016, but people tend to have short memory. Oshiomhole was at Ben Idahosa University, when I was being given a doctorate and he spent over one hour praising me for my contributions in his government and the role I am playing in the state,” he said.

“So, if during the campaigns for the 2016 governorship election he was abusing me because I was on the other side, what do you expect?

“Of course, he needed to abuse me, especially when he didn’t have a good product. You can imagine how Governor Obaseki started his campaign for the forthcoming election. They placed a big screen on Ring Road in Benin, where everybody passes and one would have thought that all he would be playing on that kind of screen are achievements of his administration in the last four years. Instead of that, he is playing about the governor of Kano State,” Ize-Iyamu added while he downplayed Obaseki’s ‘campaign strategies’.