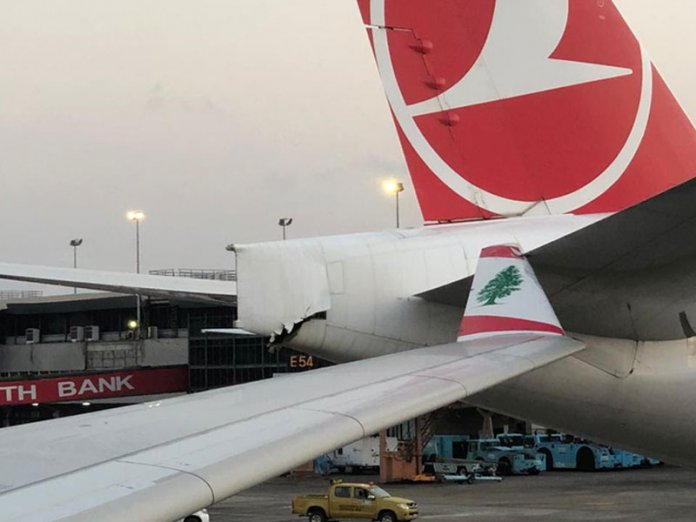 The Accident Investigation Bureau (AIB) has started an investigation into the incident involving an Airbus A330-243 with the nationality registration marks, OD-MEA operated by Middle East Airline and a Boeing 777 with nationality and registration marks TC-LJC operated by Turkish Airlines, which occurred on Wednesday at the Murtala Muhammed International Airport (MMIA) in Lagos.

AIB said the Turkish cargo aircraft was parked at the international apron when the Middle East airbus, which was taxing, ran into it, cutting through the tail cone and damaging part of the right horizontal stabiliser of the Turkish aircraft.

The agency noted that all passengers on the Middle East Airline had to disembark with no injury or fatality.

“The bureau will appreciate that the general public and press do not pre-empt the cause of the serious incident until a formal report is issued,” AIB said in a statement signed by the General Manager, Public Affairs, Mr. Tunji Oketunbi.

THISDAY learnt that the passengers of Middle East Airlines have been provided accommodation, pending when the airline would bring another aircraft to airlift them to their destination.

As of yesterday evening, the two aircraft involved in the accident were still grounded at the airport, while officials of the bureau carried out their investigation.

There had been numerous ground collision incidents at the Lagos airport over the years due to limited space at the airside of the airport, as more activities and higher movement of aircraft traffic have surpassed the designed capacity of the airport.