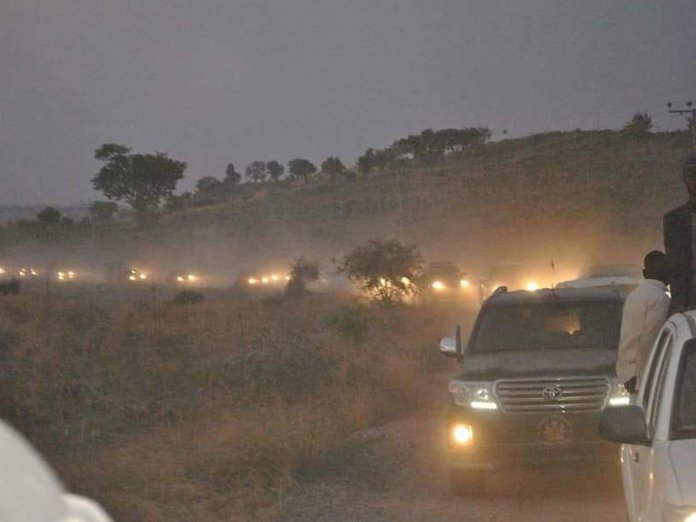 The convoy of Borno State Governor, Prof. Babagana Zulum, was yesterday attacked by gunmen, believed to be members of the terror group, Boko Haram, at Baga in the northern part of the troubled state.

THISDAY gathered that the governor had earlier left the state capital, Maiduguri on Monday to an undisclosed destination in the state as has become his tradition to personally distribute palliatives to internally displaced persons (IDPs) in liberated local government areas.

“Fortunately the convoy cleared them with two vigilantes and a policeman wounded in the crossfire.”
“The convoy has since returned to Monguno town to forestall any other attack on the dreadful road.”

Investigation revealed that the governor left Maiduguri with a large convoy to give enough palliatives to the IDPs for Eid-el-Kabir celebrations.

TheCable gathered that Zulum had not returned to Maiduguri, the state capital, as of 9:10 pm yesterday.
But one of the governor’s aides, Mohammed Mai Bukar, assured residents that he is safe.
In a Facebook post, Bukar wrote: “To Our Concerned Citizens, HE Prof. Zulum and his entourage are all fine and there was (were) no casualties. Thanks!”

This is the second known attack on the convoy of Zulum within a year.

While returning from a trip to Bama LGA last year, his convoy was attacked at Konduga in Borno.

That attack happened seven months after the Boko Haram insurgents targeted the convoy of Senator Kashim Shettima, Zulum’s successor, on his way to Gamboru Ngala, still in Borno.

All attempts to get confirmation from the government were unsuccessful as the spokesman to the governor, Mallam Isa Gusau, and the Borno State Commissioner of Information, Alhaji Babakura Abba-Jatto, could not be reached on their mobile phones.