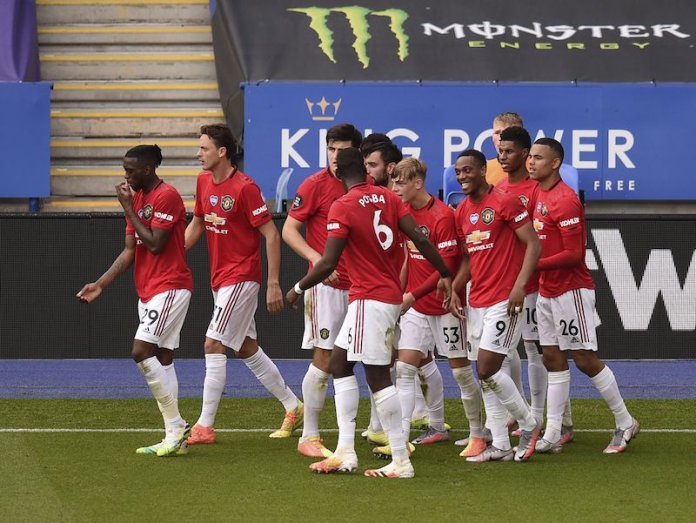 Manchester United secured a place in the Champions League at the expense of Leicester City with a 2-0 victory at King Power Stadium.

Ole Gunnar Solskjaer’s side needed a point from this decisive final-day meeting to confirm a place in the top four – and break the hearts of the Foxes, who were in a Champions League spot for so much of the season.

Leicester needed victory once Chelsea took command at home to Wolverhampton Wanderers but their dreams were dashed as Bruno Fernandes scored a 71st-minute penalty after Anthony Martial tumbled under challenge from Wes Morgan and Jonny Evans.

Both sides had their chances, with Leicester City keeper Kasper Schmeichel saving well from Marcus Rashford in the first half and Jamie Vardy seeing a header glance off the frame of the goal after the break.

Leicester pressed but could not break Manchester United down and their misery was compounded when Evans was sent off against his former club for a wild, late lunge on Scott McTominay.

Manchester United confirmed the formalities seconds from time when substitute Jesse Lingard robbed Schmeichel and rolled the ball into an empty net.

It is a result that fulfils the usual minimum requirement of Champions League qualification for Manchester United.

But while Leicester City’s fifth-placed finish is highly creditable and earns a place in the Europa League, this will undoubtedly be a huge disappointment and anti-climax after being in a position to reach the Champions League for so long.

It will be scant consolation for them that striker Vardy will claim the Golden Boot, as the Premier League’s top scorer with 23 goals.

Elsewhere, Chelsea sealed fourth place in the Premier League to wrap up qualification for next season’s Champions League with a comfortable victory over Wolves.

Frank Lampard’s side needed a point from the potentially nervy encounter at Stamford Bridge in order to clinch a top-four place – but they claimed all three in style.

However Wolves’ league position could still be enough to claim a Europa League place for next season, should the Blues beat Arsenal in the FA Cup final next month.

Chelsea ended the season on the same points as Manchester United, who beat Leicester City 2-0, but Ole Gunnar Solskjaer’s side finish third on goal difference.