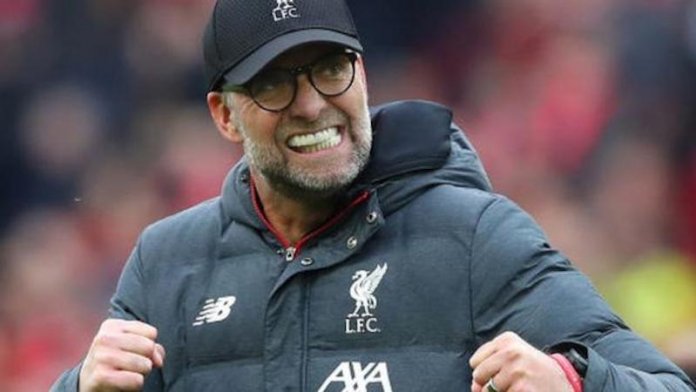 Liverpool manager Jurgen Klopp says finally being able to lift the Premier League trophy will be “like Christmas”.

The Reds will be presented with the long-awaited silverware following their league match with Chelsea at Anfield today.

“It’s been a really long run-up to this. We have been champions for a month now,” said Klopp.

“It’s a bit like Christmas – you know you’re getting a specific present but you are still excited.”

The German manager, who has guided the club to their first league title in 30 years, added: “It will be special. I’m absolutely delighted the boys have this moment.

“They deserve it more than anyone because there’s so many setbacks they have dealt with.”

Klopp, however, is keen for his squad to focus on hosting Chelsea in their penultimate game of the disrupted season – and not the celebrations after it.

“We have to put the blinkers on,” the 53-year-old said. “It is not the easiest game I ever prepared with a team because there are two things tomorrow (Wednesday) night.

“Usually I don’t have to think about anything else other than the football game and I can be focused.

“But in the end we can only win if we are 100% so we have to go for something as well, it is not as if we are there waiting for the party to start.”

Klopp admits that it will be “one of the greatest days” of his life to watch injured captain Jordan Hendersonlift the trophy the club has waited so long for – and to get his hands on it himself.

Merseyside Police Chief Constable Andy Cooke has warned fans not to visit in large numbers and congregate outside the groundon Wednesday evening because of coronavirus regulations.

A parade is expected to take place later in the year, but only when large public gatherings are permitted again by the government.

“I’m a Liverpool supporter but my first responsibility is to the city and wider Merseyside area,” he said.

“We have a full policing operation at the ground on Wednesday and we will take action. Now is not the time for celebration.”