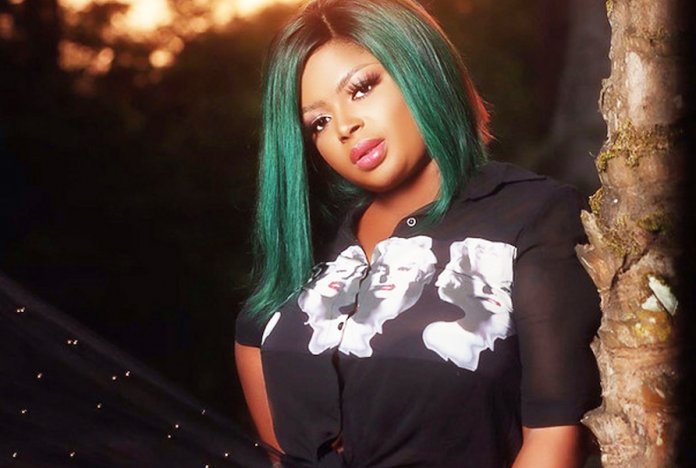 Film maker, Sharon Okpamen has added to the awareness on the dangers and risks of prostitution with her new movie titled, “Night Hustlers”. The movie which was released last Saturday, follows the wayward life of a group of prostitutes, capturing their experiences of intrigues, back-stabbing and betrayal.

Confirming the release of the movie on video streaming platform, YouTube, Sharon posted on her Instagram page alongside the cover art of the movie which she considers printing on CDs. “Night Hustlers finally out on YouTube on sharonokpamentv don’t forget to subscribe guys,” she wrote. Shot in Benin, Edo state, the flick is presented in Pidgin English dialogue via her Sharonny Productions company.

Sharon played the role of Isalabo, an influential ‘madam’ who recruited young innocent girls from the village to the city for prostitution. She was a tough woman who regularly made friends with criminal, the police, politicians and any influential person who can provide her protection. Speaking on the movie pre-release, the Edo-state born Nollywood actress said: “Movie lovers should watch out for it because it is a story that explains the risks in prostitution. I just wanted to use the movie to draw attention to the perils of prostitution and how its consequences go on to shape the life of our young girls. For me, this is how I am contributing to the society.”

Credit with over 100 movies, Sharon has carved a niche for herself through the lens of her native movies shot mostly in her hometown.

“Night Hustlers” is just one of the movie projects in her kitty at the moment. The filmmaker is due to churn out more cinematic project but due to the impact of COVID19, she had to tinker with her productions release strategy. “I have a lot of projects I’m working on now. I’m currently writing the script for a proposed movie. We’re yet to shoot because of the pandemic, but I have some movies that are coming up very soon”, she revealed.

Sharaon made her debut as actress in a 2010 movie, “Touch Not My Crown”, courtesy of a kind referral from John Okafor, better known as Mr. Ibu.

She said: “My first movie role was that of a maiden in a movie (Touch Not My Crown) in 2010. The role was given to me by the popular actor John Okafor (Mr Ibu). He brought me into the industry and helped me get the role in the movie.”

However, her break-through was a movie titled Eshikito, an Edo movie. “The movie Eshikito gave me a break-through in the Edo movie industry. I did the movie in 2016 and the movie was a huge success. It was turning point.”