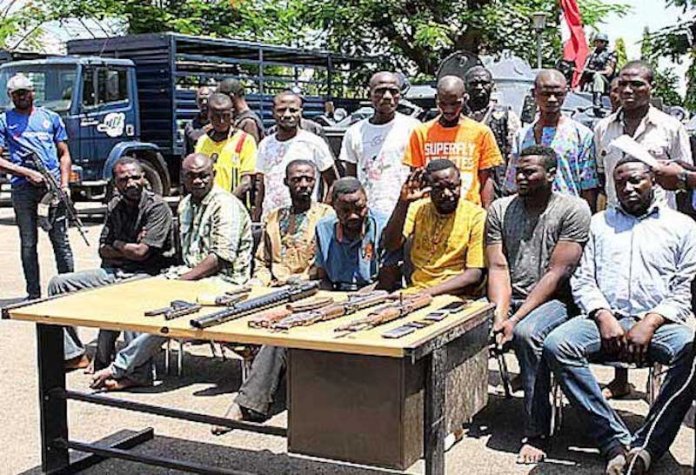 One of the principal suspects in the April 5, 2018 Offa bank robbery, Mr. Azeez Salawu yesterday narrated to the Kwara State High Court sitting in Ilorin how six suspects were killed in his presence by the policemen at Force Headquarters in Abuja.

During the attack, no fewer than 18 people, including a pregnant police woman were killed by the suspected armed robbers that invaded five banks in the ancient town of Offa.

Since then, the five suspects that allegedly partook in the incident have been facing trial at the state High Court, Ilorin. They include, Ayoade Akinnibosun, Ibikunle Ogunleye, Adeola Abraham, Salahudeen Azeez and Niyi Ogundiran who were present in court yesterday.

However, at the resumed hearing of the case yesterday, a principal suspect in the incident, Mr. Salawu told the court that the killing of the six suspects in his presence during his interrogation at the Force Headquarters, Abuja was meant to coerce him to admit his alleged participation in the bank robbery attacks in Offa, where 18 people, including policemen were reportedly killed. This is even as defence counsel, Mathias Emelibe, prayed the court to order the exhumation of the corpse of a principal suspect in the robbery, Michael Adikwu, who allegedly died in police custody in Abuja.

This, he said, was necessary to determine whether the cause of Adikwu’s death was natural or otherwise.

He said that attempts by the prosecution to impress it on the court that there were only five suspects in the case amount to suppression of facts.

He recalled that when the case first came up in October 2018, six suspects were listed on the charge sheet, including Michael Adikwu, who the police later claimed to have died in their custody.

Mr. Salawu, the fourth defendant, however had said earlier in during cross examination in the trial within trial that, “At that same day, Inspector Hassan directed officer Vincent to go and bring five people from somewhere. They asked me to watch what they’ll do to the five persons and that they will do same to me if I don’t cooperate with them. They killed the five persons in my presence.

They also shot Akinnibosun,Adeola and Ogunleye on the legs in my presence. They threatened to kill me but I started begging that I didn’t do anything wrong.

“They said I and Ogunleye robbed at Offa and I denied this but they insisted. They beat me mercilessly inside a generator house, otherwise called theatre. It’s a lie that they interrogated me in a conducive environment.”

Salawu added, “On the second day, I was brought out again from the cell. They showed a man to me and asked me whether I know him. The man is Michael Adikwu. I said I don’t know him. They also asked him whether he knows me but he replied no. They killed him in my presence.

“I pleaded with them not to kill me because my children are still young. They tied me down and hanged me again. I then asked them what they wanted from me, when the torture became unbearable”, he said.

Salawu further claimed that he was forced to thumb print a statement already prepared by the police against his consent.

The prosecution counsel, Abdulwahab Egbewole (SAN), said that contradictions in the dates when the suspects claimed they were interrogated and the police records showed that they were only cooking up stories about their alleged torture and coercion.

He therefore urged the court to admit the confessional statements by the suspects.