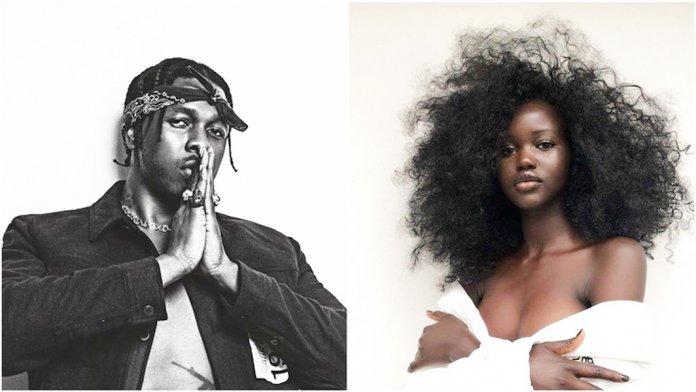 Imagine Douglas Jack Agu, the Nigerian music star who performs as Runtown meets South Sudanese/Australia-based fashion supermodel, Adut Akech. He serenades her with one of his lovely songs and asked her to give him love; yeah, like he sang in ‘Gimme Love’ with Seyi Shay. Mind you, the Soundgod Music honcho has got a lot of beautiful songs, one of which is ‘Mad over You’. He switches to the song and tells her the tune was inspired by African beauty, for a fact. She falls for him and soon afterwards, they both find themselves together as an item. Then the ‘Gallardo’ crooner wants everyone to know he is head over heels in love with this new lady, who is finer than Lupita N’yongo and took to his social media to share a picture of them together. That could just be it.

Soon enough, it sparked relationship rumours. The pair further took to their respective Instagram accounts to share loved-up videos. The duo first sparked what seemed like chemistry on Instagram a few weeks ago when the music star posted a photo on the social media app. In the video shared by Runtown, the international model was seen on the bed covered with a white duvet. She had her arms on her head and the camera zoomed in on her.

Adut, fans and admirers camped in his comment section where she couldn’t hide her admiration for the music star. The reports started swelling. It trends on social media that after several hints at what appeared to be a flirtatious moves on their respective Instagram stories, the two have taken it to the next level. Akech in a post shared via her Instagram stories on Tuesday, July 7, 2020 is seen showing off her new boyfriend (maybe lover).

The singer and the model were seen taking a walk on the street as Runtown tenderly pecked her on the cheek. As Runtown made a video of them, Adut tried to cover his face. Adut Akech’s latest video on Instagram indicates that the two might be up to something. It is not clear if both celebrities are officially a couple, however, it would be one friendship or relationship to look out for in the coming days, weeks, or months.

20-year-old Adut was born in South Sudan but raised in Kenya. She is one of the most sought after models in the world, having worked with several brands. Akech was introduced to the fashion industry by her family, and despite getting scouted multiple times by local modeling agencies when she was 13 and 14 years, she started her modeling career at 16, signing to her mother’s agency, Chadwick Models, in Sydney, Australia, in 2016.

In 2019, she won the ‘Model of the Year’ award at British Fashion Awards, London. Akech, who made her fashion week runway debut as an exclusive in the Saint Laurent S/S 17 show, has worked with top brands including Chanel, Valentino and Givenchy, and many others. Runtown, 30, was previously linked to US-based model, Selena Leath, who is also the mother of his son, Zamar.