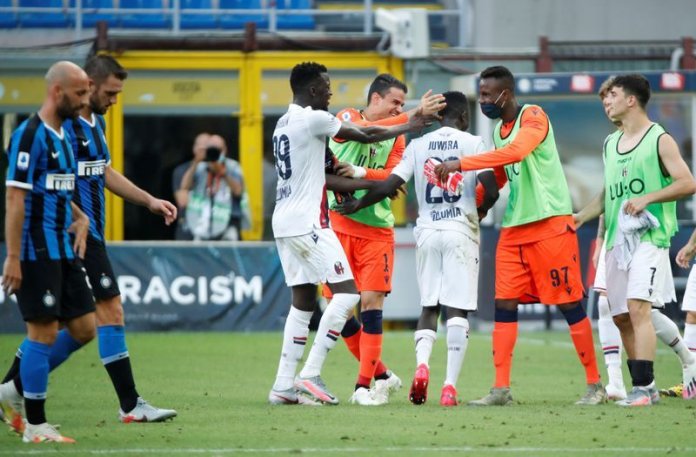 The 10 men of Bologna staged a stunning comeback to deny Inter Milan the chance to move within a point of second-placed Lazio in Serie A.

Former Super Eagles winger, Victor Moses was not listed in Inter’s line up for the game.

Musa Barrow struck the winner from inside the box late on, just six minutes after Musa Juwara equalised.

Romelu Lukaku had opened the scoring when he tapped in the rebound after Lautaro Martinez’s header hit the post.

Martinez missed the chance to double his side’s lead from the spot, after Bologna’s Roberto Soriano was sent off.

Both sides finished with 10 men as Alessandro Bastoni was shown a second yellow card with the score poised at 1-1.

Antonio Conte’s Inter remain third in the table, four points behind Lazio, while Bologna move up to ninth.

Speaking after the game, exasperated Inter Milan coach Antonio Conte blamed himself after watching his team collapse again on Sunday.

“There’s a great, indeed enormous, disappointment,” said Conte whose side were leading 10-man Bologna when they missed a second-half penalty and conceded twice to go down 2-1 to late goals by Gambian pair Musa Juwara and Musa Barrow.

“We managed to lose a match that we should have brought home comfortably. I’m angry with myself as the coach and responsible for what happens on the pitch,” said Conte.

“The players must also be angry with themselves although they only have a small part of the blame.”

There was a long delay before Conte spoke to the press and some Italian media reports said he was involved in a meeting with club directors.

“It’s right to question all of us, first of all me because I was called to bring Inter back to victory after so many years,” he said. “Of course, it won’t happen overnight but this situation brings a lot of bitterness.

“We have not reached the standard we set ourselves. Everyone has to show they want to rise above the past years, otherwise it’s right to make other decisions”.

Bologna coach Sinisa Mihajlovic was happy with the result but also frustrated that his team, who are ninth, took so long to get going.

“We were poor in the first 20 minutes, we were afraid and there were too many wayward passes,” he said. “We really looked a completely different team in the second half.

“It wasn’t easy to be a goal down with ten men; this is a great victory, with character and conviction. However, we’ve sometimes waited to concede before we start to play. That’s not okay – we need to play from the off.”