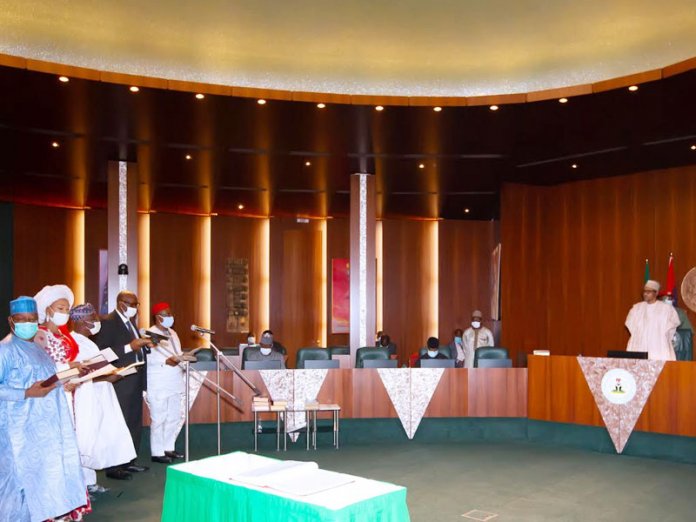 The ceremony, at the State House in Abuja, was graced by Vice President Yemi Osinbajo; Secretary to the Government of the Federation (SGF), Mr. Boss Mustapha; Chief of Staff to the President, Prof. Ibrahim Gambari, and Kwara State Governor, Mr. Abdulrazaq Abdulrahman.

Speaking at the event, the SGF said the federal government expected the appointees to live up to their constitutional responsibilities, charging members of the RMAFC, in particular, to explore revenue opportunities of the non-oil sector and mobilise revenues for the country.

He also spoke on expectations from the FCC and FCSC, saying that members are expected to perform their responsibilities creditably in accordance with the provisions of the constitution.

Mustapha said: “Basically, they have some constitutional responsibilities because all these commissions are mentioned in the Constitution of the Federal Republic of Nigeria and so that presupposes that already the constitution has provided for them a mandate. More especially as we are notching towards the end of the president’s tenure.

“We have just spent a year and we have three years to go but there are so many things that we want them to begin to do in terms of reenergising the system. The Federal Character Commission particularly has the responsibilities in the constitution which is very fundamental to ensure equitable distribution of not only offices but even of amenities and benefits and welfare to the people of the country.

“The Revenue Mobilisation, Allocation and Fiscal Commission is very critical, particularly now that we have a very serious shortfall in our earnings. The essence of the revenue mobilisation is to look at the non-oil sector particularly in terms of mobilising revenue for the country. I believe that now that they have a full complement of their membership, they should be able to give it the necessary drive.

“The Federal Character Commission (FCC) is an institution that has the responsibility of looking at the federal civil service in terms of employment, promotion, capacity and we need a new civil service to take us to the next level.”

Two members of FCC sworn in were Dr. Jonah Madugu to represent Plateau, Benue and Nasarawa States and Dr. Fredrick Ekwem from Imo State to represent Imo and Abia States.