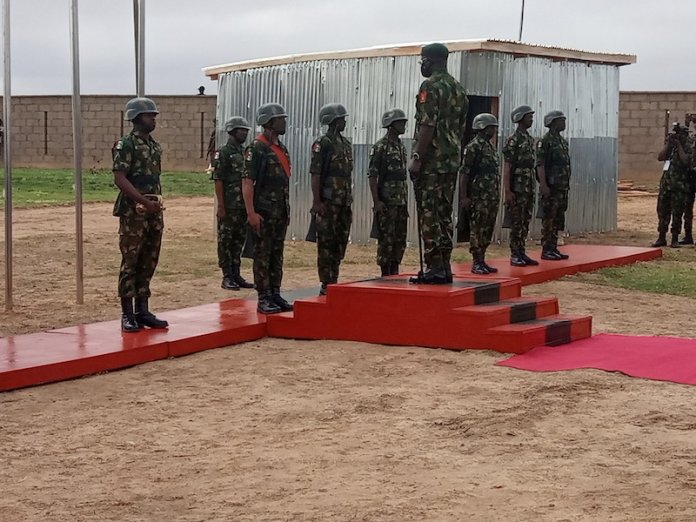 The Chief of Army Staff (CAOS), Lt. General Tukur Buratai, on Wednesday said dialogue is not a military option for tackling banditry, kidnapping and other heinous crimes currently bedevilling the North-west region.

He described the peace accord between the North-west governors and the marauding bandits as purely political and administrative decision.

Buratai disclosed this during a press conference at Special Army Super Camp IV in Faskari Local Government Area of Katsina State as part of the week-long activities in commemoration of 2020 Army Day celebration.

He explained that the mission of the Nigeria Army at this trying time is to fight bandits, insurgents and other hoodlums launching deadly onslaughts on innocent citizens, adding that anything short of that would be prolonging insecurity.

The Katsina State Governor, Aminu Bello Masari, had granted amnesty to bandits after a tour to Fulani settlements and strong enclaves of the bandits in Rugu Forest on September 4-9, 2019, during which the bandits and their forest commanders denounced banditry.

The peace accord was adopted by the North-west governors following a Peace Summit convened in Katsina by the Inspector General of Police (IG), Mohammed Adamu, that facilitated discussions with representatives of the bandits from the affected states of Katsina, Kebbi, Niger, Sokoto, Kaduna and Zamfara.

Buratai said: “For now, dialogue is not an option for us and is not on our table. It is absolutely political decision. Our mission is to move into the bush and defeat the bandits tactically and anything short of that could only prolong the insecurity.

“We are determined to deal with them (bandits) in the bush even in towns and cities. They are moving everywhere and we will deal with them based on our capability which we have developed with other security agencies.”

The COAS also debunked the rumours making the around by some residents of Katsina State that the soldiers were not doing enough to tame the wave of insecurity in the state.

“It is unfortunate that some politicians are politicizing military operations. Some even say Nigerian forces are coming into our territory to fight bandits. All the allegations are false and you can quote me. We are a professional and responsible army, we will continue to defend our country,” he said.

The COAS assured the people that the military and other security agencies would continue to work assiduously towards ending bloodbath ravaging some parts of the country to enhance peace and development.

According to him, “The Nigerian Army has performed creditably well in these areas and has contributed immensely to a peaceful and secured Nigeria through improved training and sustained professionally executed operations.”

He, however, said the Nigerian Army would concurrently distribute palliatives to vulnerable Nigerians across the 36 states of the federation, including the Federal Capital Territory (FCT) to cushion the effects of Covid-19 pandemic.

As part of other activities lined up for the Army Day, he said there would be the commissioning of special intervention projects executed by the Nigeria Army in the six geo-political zones of the country.

Meanwhile, the theme for this year’s Army Day celebration is “Nigeria’s Territorial Defence and Sovereignty: Imperative for Nigerian Army’s Sustained Training and Operations.”