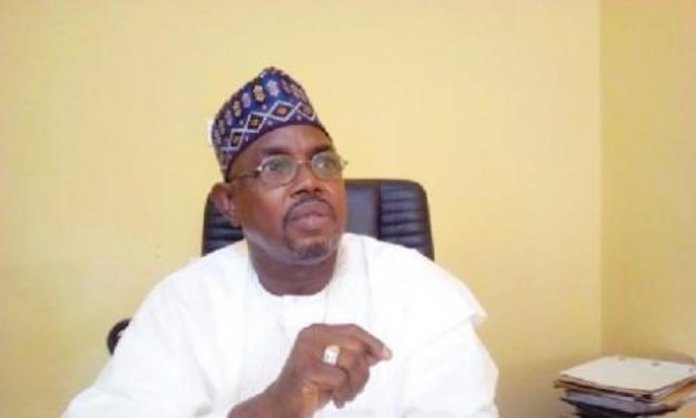 The National Secretary of the All Progressives Congress (APC), Arch. Waziri Bulama, has described the National Executive Council (NEC) meeting of the party summoned by Mr. Victor Giadom and scheduled for Thursday as illegal.

President Muhammadu Buhari had Wednesday in a statement by his spokesman Garba Shehu thrown his weight behind Giadom as the acting national chairman of the party and announced hiis decision to attend Thursday’s NEC meeting convened by Giadom.

But Bulama Wednesday evening said it was not true that President Muhammadu Buhari known for insisting on compliance with party constitution and rule of law supports the convening of such an illegal NEC by a non-member of NWC.

Bulama in a statement issued Wednesday therefore called on party members to disregard the invitation because the author and sole signatory of the said invitation is not member of the National Working Committee (NWC).

He stated: “We are constrained to once again react to a purported invitation to a National Executive Committee meeting of our great party; the All Progressives Congress (APC) issued by one Victor Giadom who until the last general elections in 2019 held the position the Deputy National Secretary of the Party.

“Our esteem members are advised to disregard this invitation because the author and sole signatory of the said invitation is not member of the National Working Committee (NWC) of our party, talk more of being an Acting National Chairman as claimed.”

“The President renowned for insisting on compliance with our constitution and rule of law. It can therefore not be true that Mr. President supports the convening of such an illegal NEC by a non-member of APC’s NWC. We urge all to disregard the said Notice as neither the NWC nor the NEC has called for such meeting.”

The national Secretary insisted that Giadom had voluntarily resigned in compliance with Article 31(1)(i) of the party’s Constitution to contest the position of Deputy Governor in Rivers State during the last general elections and has not been re-nominated by his Zone to return to that office.

He stressed further that Giadom’s non-membership of the NWC had been affirmed by the Courts and an Order restraining him from parading himself as a member of the NWC was granted against him on June 22, 2020 in the case of Dele Moses & Anor V APC (Suit No: PHC/360/2020) where the Court said inter alia:

Bulama noted that Giadom had equally been suspended by the Rivers State Chapter of the party and the NWC received communication of same on June 21, 2020.

He added that the said invitation copiously references the NEC meeting he ‘illegally’ sought to convene on March 17, 2020 with a view to resurrecting same to hold on June 25, 2020.

Bulama said regrettably, this proposed NEC meeting was also infected by the same bug that rendered the former void which is Article 25 (B) of APC Constitution which provides: “(1) The National Executive Committee shall meet every quarter and or at any time decided by the National Chairman or at the request made in writing by at least two-third ofthe members ofthe National Executive Committee provided that less than 14 days notice is given for the meeting to be summoned.

“(ii) Without prejudice to Article 25(B)(i) of this Constitution the National Working Committee may summon meeting at any time, provided that an emergency of at least seven (7) days Executive notice of the Committee meeting shall be given to all those entitled to attend”.

Bulama pointed two-thirds of the members of NEC may also summon a meeting, but it shall be required that the National Secretary gives 14 days notice to all persons entitled to attend.

According to him, In this case, the purported invitation was illegally issued on June 23, 2020 and the meeting fixed for June 25, 2020 which gives notice for only 2 days. We concede that a shorter Notice period of 7 days is allowed under our Constitution as stated in 25(b)(ii) above, however, a majority of the members of NWC must have voted to summon such a NEC meeting and that was not the case in this instance.