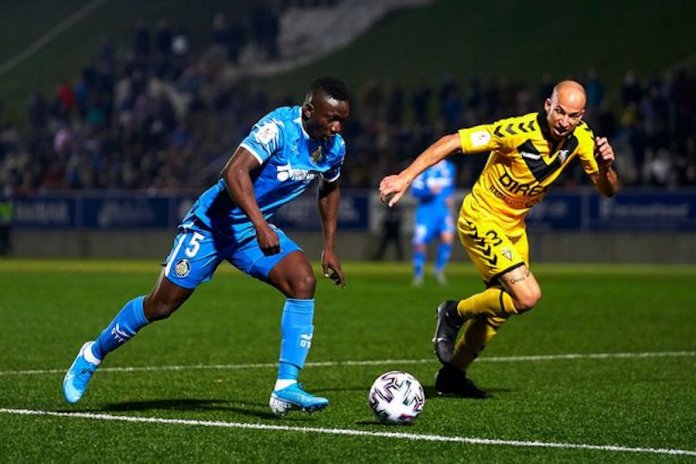 Super Eagles and Getafe midfielder, Oghenekaro Etebo, is presently in Cloud Nine after scoring maiden goal for his club in the restart of the Laliga.

That lone goal earned Getafe a point from the 1-1 draw with Eibar at the Coliseum on Saturday.

Etebo who is on loan from English Championship side, Stoke City, has been impressive in his outings with the Getafe but yet to register any goal until Saturday.

The Delta-born player took to Instagram yesterday to celebrate the goal.

“Happy to get my first Getafe goal. Heads up lads,” Etebo posted on social media.

The feat, made him the 21st Nigerian to score in the Spanish top-flight, joining an illustrious list that includes the likes of Ikechukwu Uche, Finidi George, Emmanuel Amuneke, Mutiu Adepoju, Odion Ighalo, Obafemi Martins and Rashidi Yekini.

The 24-year-old, who was part of the Nigeria’s bronze winning football team to the last Olympics in Brazil, according to reports, was on the field for 69 minutes, produced 41 touches on the ball, and 16 accurate passes (64%) with one shot on and off-target.

Etebo gave his side the lead after driving in the ball home from Angel Rodriguez’s assist in the 30th minute.

Unfortunately, the lead was short lived as Charles Dias equalised just before the half-time whistle with a header after Sergi Enrich knocked the ball into his path.

The encounter was Etebo’s ninth league appearance for Getafe since his arrival in January.

He has played in every game bar against Athletic Bilbao and Valencia, during which he was nursing injury and was unfit to make the match day squad.

Of the nine outings, he got starting shirt in six of them.

Before last Saturday’s first ever goal for his club in Spain, he had previously played for Las Palmas on loan from Portuguese side Feirense. He was also a January loan signing and made a total of 14 appearances.

His presence was, however, not enough for the Canary Islands outfit to stay up in La Liga as they finished in 19th place.

Getafe’s draw with Eibar means they remain fifth on the La Liga standing on 48 points from 30 games.