The world was suddenly woken up by the emergence of a pandemic that has troubled world leaders, beyond politics, religion and almost tending to assault the capacity of medicine and science. Covid-19, as corona virus has presently been code-named continues to ravage the entire globe, with hundreds of thousands of death and several cases that are still tasking the medical profession and national resources.

The undeniably dangerous toll of the virus on the life and economy of Nigeria can be understood from several deaths and sudden drain on our resources which continue to re-order the priorities and preferences of government at all levels. The federating segments have gone ahead to set up measures all aimed at containing the virus as well as saving the lives and property of the people. For example, the terrific speed at which the pandemic raged in Lagos, Ogun state and Abuja necessitated a total lock-down order by the Federal government, to prevent further spread while the curative capacity of government was being enhanced in these areas.

However, try as the governments at the states and centre could, the virus transcended the boundaries with an unprecedented ravage in,at present, thirty four states of the federation. It was this tendency to destroy the very fabric of our existence that prompted concerted and collective efforts by various governments, whose leaders had sworn to be vanguards of any sane society, to take what I consider to be very proactive steps, beyond any political colouration. These measures include sensitisation, mobilisation, prevention, curing as well as providing palliatives for the less privileged and vulnerable, to cushion the effect of business closures and lock down.

In Rivers State, for example, the government issued clear-cut guidelines and Executive Orders to ensure that citizens were protected against the virus. These orders that were not exclusive to Rivers State, are in tandem with similar guidelines emanating from the federal and other state governments with the resolve to comprehensively defeat the common enemy. And with the speedthat is synonymous with the Wike administration, the state government took the following steps in the collective interest of the state and in the overarching determination to engender good governance: First, was a grass roots parlance with the Traditional rulers who are the closest to the grass roots, as a way of informing the people that corona virus is deadly and needed to be avoided by simply adhering to the rules put in place. The rules of face mask, social distancing, washing of hands and the use of sanitisers. Also,the government issued an order banning all hotels, guest houses and beer parlours, including markets, churches and mosques from operating. We have heard that community infections could be more disastrous if no measures were taken to stem the spread of the virus. The traditional rulers who acknowledged the usual proactive tendency of the Governor described the interactive as timely and promised to relay the essence of the message to their various domains, where they hold sway.

Secondly, and within the confines of the law, Governor Wike set up some strategic committees to monitor compliance and streamline the measures put in place. So far, there are committees on the prevention of illegal movements across the boarders, opening of markets and business places such as hotels and other similar outfits and facilities within the state. There is also another committee for the distribution of palliatives to the down-trodden and vulnerable. Because these guidelines and Executive Orders were issued with attendant punitive measures, those violated any section, were summarily dealt with and any case where exigencies were obvious, a truce was easily procured. In the case of some oil company operatives who flew into Port Harcourt at the heat of the pandemic, reason was applied when their cases were adequately addressed. A very vigilant approach has also led the discovery of truck loads of agricultural products carrying human cargo, which counter to the rules of the period.

Thirdly, as part of the measures to alleviate the suffering encountered by the people, the Desmond Akawo-led palliatives committee is going round the state reaching out to the masses whose conditions require their staying at home. This particular effort is yielding positive results as various opinion leaders from the grassroot have continued to pour encomium on the government of Nyesom Wike for his tireless efforts to bring good governance to the people.
However, it was not envisaged that the process of fighting corona virus will be seamless. It was not planned that none of the proposals could meet with the opposition, howbeit unrealistic. Along the line, it was discovered that Prodest Hotel in Alode Eleme was operating in total violation of the extant order in Rivers State. Eleme, for the purpose of a reminder is home to several oil and gas activities. There is also a major ocean terminal located within the zone. In other words, the uncontrolled spread of the virus in that area is an instant call to calamity. This is an environment where the people were expected to apply maximum caution and security to avert danger from corona virus.

It is obvious that the contravention of the preventive orders of the state government by any individual or corporate body is capable of attracting punishment, no matter who and what were involved. It is on record that Prodest Hotel was visited by the monitoring committee which found out that the hotel was in full operation, in total violation of the order of state. It is also on record that these operatives were brutally attacked which has led to the death of one of the men. In keeping with his determination to enforce the order of state at this period, which has been described by well meaning Nigerians as perilous as in a war, Prodest Hotel in Alode Eleme was demolished. The demolition which was supervised by the state apparatus led by the Governor is now seemingly turning out to be the crux of the matter in the fight against corona virus in Rivers State.

However, the current resonance of media surfeit over the demolition, is completely unacceptable, unnecessary and irrelevant. It would appear that the untutored flaks drawn by the likes of a common irredentist like Raph Uwazurike and other face book critics are bereft of the knowledge of the processes of the current war against corona virus and even the history of demolition in the state.

These days, journalism is fighting the venality that has tried to kill the truth that lies behind the profession. The unreasonable hiatus created by some writer and lacks history. The previous administration demolished the former Olympic hotel, Abonnema wharf, and put them up for grabs by cronies who later positioned themselves for the governance of the state. These proposals have fallen through because they are ill-motivated. It is more worrisome that some senior citizens of the state, including two former senators who had previously applauded Governor Wike for his pragmatic decisions in fighting the pandemic would turn around to condemn the same act of demolition which was right in a previous dispensation. I think that this unbridled shenanigan is riddled with double standards and repugnant hypocrisy.

Let us not forget that the property at Eleme was in operation during the period of a total lock-down when the state had declared all forms of operation illegal, with definite consequences for violations. Maybe, Governor Wike would have been termed a toothless Bull dog, had he turned the other way while a section of the state was vile and malfeasant. But the imperatives of good governance entails, amongst other things that are a chief Executive must stand on his words, not just for the provision of amenities for the populace but also for the exert punishment on offenders. Some commentators have suggested a forfeiture of the property as a solution, without adding that forfeiture is tantamount to total ceding to another ownership which permits the current owner to sell, rebuild or even demolish as he deems fit.

In the midst of the arguments, Mr Princewill Osaroejiji has spoken from his hide-out to say that he is not the owner of the Hotel in question while at the same time defending the management. According to him, the monitoring team had demanded a certain sum for the hotel to be allowed to operate. The refusal of this request must have prompted the decision to demolish the property. He had also fingered the current Commissioner of finance Mr Isaac Kamalu who also hails from his place as having masterminded the entire set-up. One tends to be curious with Osaroejiji’s alibi as he ferociously defends a hotel whose owner he doesn’t know. The other issues that relate to cultism, gun running and criminal allegations may be resolved in juxtaposition with the current statement credited to the Traditional ruler of Eleme, stating inter alia that the entire Eleme Kingdom is in support of the actions taken so far by the state government to fight corona virus.

It would interest a careful observer that the act of demolition by any government is not novel and they have been found to fall within the legal exigencies of the time. The Kaduna state government has demolished some structures that constituted an obstruction in the way of successful war against the pandemic. In Lagos state, Governor Sanwo Olu, after several warnings against messing up the indelible marks the state government was making, undertook the demolition of buildings in the state. The African Independent Television, had reported that the Bayelsa state government also brought down several structures that provided shelter for residents. Can Rivers State be excluded from the gamut of the war against covid-19 without public affairs analysts blossoming their credentials on the efficacy of calling out Governor Wike for pillory?

The merit of the imbroglio arising from Prodest Hotel is that nobody should wait until a law is violated before offering professional advice. Rather, the people who are likely to be victims should be able to get their consciousness adequately enlightened to remain in legitimacy rather than assume any special preference along the line. Princewill Osaroejiji may have assumed that his membership of the People Democratic Party was enough shelter for unpardonable infraction. But the action of the state government which was approved by the state security council has proved otherwise.

Good governance, as a matter of fact, must be anchored on forthrightness, capacity to deliver on promises as well as the will to stand by now inevitable process, no matter whose ox is gored. And those who the actions of government do not favour may approach the judiciary a proper interpretation and learning. But certainly, power cannot lie fallow.

editor - July 6, 2020 4:05 am
7
BY OKEY IKECHUKWU (EDIFYING ELUCIDATIONS) It is the home state of the President and Commander-in-Chief of our armed forces. But it appears to be neither... 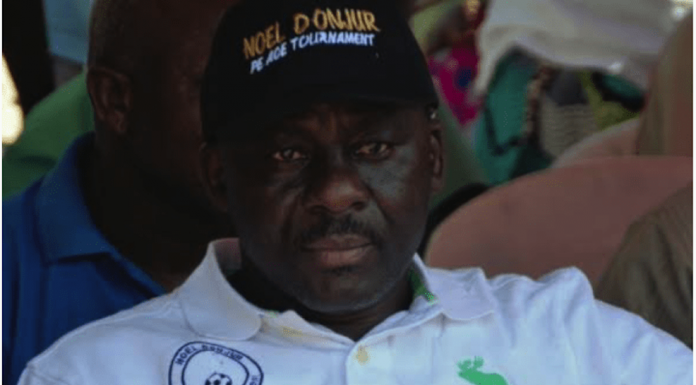