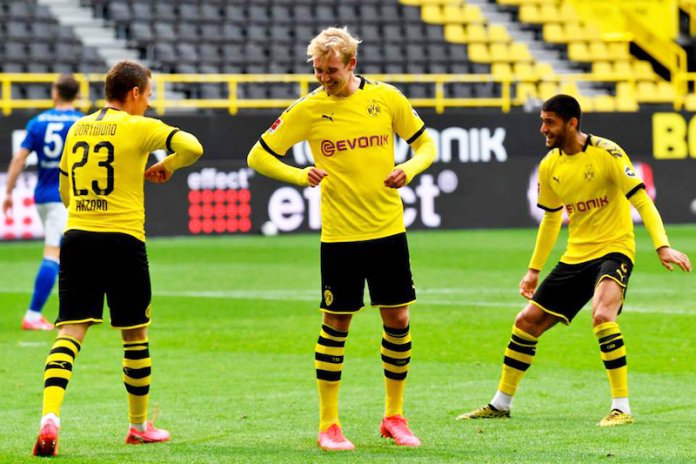 With a hopeful world looking to Germany to see how feasible it is for professional football to return despite the coronavirus, multiple matches took place across several cities in both the first and second tiers of the German league. The pick of the matches was the much anticipated Revierderby, the match between the two biggest clubs in Germany’s Ruhr region, Borrusia Dortmund and Schalke 04.

Teen sensation Erling Braut Haaland continued from where he left off before the enforced break by scoring the first for Dortmund in convincing 4-0 win over Schalke.

The game will mostly be remembered for the surreal circumstances in which it was played, as Germany became the first major league in Europe to resume action behind closed doors.

There was an eerie atmosphere at Dortmund’s iconic Signal Iduna Park stadium, with every shout by players or coaches audible, and social distancing protocol followed by substitutes and during goal celebrations.

Haaland opened the scoring with a trademark cool finish, flicking home Thorgen Hazard’s cross to continue his sensational season, albeit after an enforced break of almost 10 weeks.

Raphael Guerreiro added two more goals and Hazard also found the net as Dortmund went on to claim a comfortable win over their near neighbours and move within a point of leaders Bayern Munich, who play today.

Elite-level football might be back in Europe, but it certainly has a different feel about it than it did two months ago. Strict hygiene protocols saw the Dortmund and Schalke players arrive on multiple buses, use several changing rooms and then enter the pitch by different routes.

Warm-ups were staggered and the coaching staff and substitutes wore masks and were all separated by two metres as they took their place on the sidelines.

Once the balls had been disinfected by the ball-boys, the game began in total silence, only pierced by the referee’s whistle for kick-off, before being played out to the sound of echoed applause or yelled instructions from the dug-outs.

Fans were completely absent from the 80,000-capacity stadium but that did not stop the Dortmund players performing their trademark salute to the empty stands at the final whistle – standing apart rather than holding hands of course.

The backdrop to the game made for a strange spectacle, but it did nothing to disrupt Haaland’s fine form even if it was 70 days on from his last Bundesliga appearance. With the rest of Europe watching on, Dortmund’s 19-year-old Norwegian wonderkid reminded everyone of his precocious talent as he scored one goal, and helped make another.

Haaland’s goal means he now has a total of 37 in club competition for the season – before joining Dortmund he scored 14 goals in Austra’s top division for Red Bull Salzburg, and eight more in the Champions League.

He has now scored 10 goals in his first nine Bundesliga appearances – and 13 in 12 games in all competitions – since his January move from Red Bull Salzburg and his prolific scoring rate shows no sign of slowing up.

Another of Dortmund’s highly-rated young talents, England forward Jadon Sancho, was restricted to an 11-minute cameo off the bench, because of a calf injury.

On-loan Everton full-back Jonjoe Kenny started for Schalke, who brought on Wales winger Rabbi Matondo as one of their five substitutes – two more than usual are permitted under the new regulations for the Bundesliga’s restart.

The German Bundesliga restarted on Saturday and gave a glimpse into what the Premier League and other top leagues may look like if they return. South Korea’s K League kicked off last weekend, while some smaller leagues such as Belarus and Nicaragua have never stopped – but this was the first elite football in over two months because of the coronavirus pandemic.

So what did football in May 2020 – played behind closed doors and with some social distancing – look like?

Teams arrived in several buses so players could socially distance on the journey to the game. Players and staff had all been quarantining in team hotels all week and are being tested for coronavirus regularly. As they left the buses they wore facemasks on their way into the ground. Other people attending the games, including the media, had their temperatures checked.

Fans were banned from matches, with police patrolling to make sure no crowds gathered at the venues. Only 213 people were allowed into the ground – 98 on and around the pitch (like players, coaches and ball boys) and 115 in the stands (such as security, medics and media). Another 109 people (including security and VAR operators) were allowed just outside the stadium.

There were 30 match balls, each of them disinfected by ball boys and left on special spots rather than handing them to players.

Substitutes and coaches wore masks and socially distanced on individual seats on the bench – or in some cases in the front rows of the empty stands behind the benches. RB Leipzig, who drew with Freiburg 1-1, brought in a set of airport stairs so players could get to and from their seats in the stands.

Head coaches were allowed to go without a mask so they could shout instructions to their players. Substitutes took off their masks to warm up, and when players were replaced they were handed a mask before reaching the bench.

Elbow bumps instead of hugs

The actual play itself was no different to normal with tackles flying in and plenty of goals – 16 – across yesterday’s six games. But there was some social distancing on show for goals as many strikes were celebrated without the usual embraces, think elbow bumps instead of hugs.

However, some goals – notably those by Hertha Berlin players in their 3-0 win at Hoffenheim – were just celebrated as normal. Hertha will not be punished as the German league asking players not to embrace is a guideline and not a rule.

With only a few dozen people making noise on the benches, television viewers could hear the players and managers talking, as well as the sound of the ball being kicked – and of the ball hitting the back of the net.

Teams were allowed to use five substitutes in a game – which other leagues will have the option to do when they return. So Schalke, in their 4-0 defeat by Borussia Dortmund, were able to make two substitutions at half-time – and another three after the break.

After the final whistle – to deafening silence – Borussia Dortmund’s players went across to their famous South Bank – usually known as the Yellow Wall which holds 25,000 fans – to applaud and run towards the empty stand to celebrate.

Wolfsburg players kicked boots with the referee and his assistants, rather than the usual handshakes, following their 2-1 victory at Augsburg. Elsewhere, fist bumps and elbow bumps were the name of the game.

Players and managers were interviewed by television reporters with microphones on sticks, keeping to a safe distance, while post-match news conferences were done by video conferencing.

Did the fans stay away?

One of the reasons Premier League games could be played at neutral venues is to avoid fans congregating outside their own ground during a game. But that did not appear to be an issue in Germany yesterday.

Dortmund police spokesperson Olivier Peiler said: “It’s surprisingly quiet. We had expected and calculated various scenarios, but we didn’t expect that only a few fans would come to the stadium and the city centre.

“Apparently the pleas by the city and police to stay and watch the match at home have worked out. We are very pleased by this in order to avoid infections.”

Not everyone was happy though. Augsburg fans put a banner in an empty stand saying “football gives life – your business is sick” in protest at football continuing during the pandemic.

What did the managers think?

After a goalless draw with Paderborn, Fortuna Dusseldorf manager Uwe Rosler said: “The day was a bit odd. I am an emotional man, I like to take a player in my arms, which I obviously couldn’t do today.”

Dortmund coach Lucien Favre, said: “There is no noise. You shoot at the goal, you make a great pass, you score, and nothing happens. It’s very, very weird.”

Freiburg coach, Christian Streich, told a virtual news conference: “Obviously, it’s sad the fans cannot watch the game, that we can’t meet up and go to the game and play this game together.

“This is not something that can go on indefinitely. But under these conditions I did not expect a drop in quality because of a lack of fans and we did not see that.”

Hertha Berlin boss Bruno Labbadia defended his side celebrating their goals without social distancing. “The fact is that this is part of football,” he said. “We’ve been tested so many times that we can allow it.

“If you can’t celebrate anymore, the whole thing breaks down. I’m just glad that the team had reason to cheer today.”

How did other people react?

Former Bayern Munich and England midfielder Owen Hargreaves, who was doing BT Sport punditry from his own house, said: “I am missing the fans already. It was so strange, it is going to take some getting used to. “Football without the fans is tough to watch.”

Marty Waddell tweeted: “Nope. Sorry. As much as I love and miss football, that just wasn’t right. And i still miss it just as much (if not more).”

Justice Mary Odili A Peek into Her Life and Illustrious Career