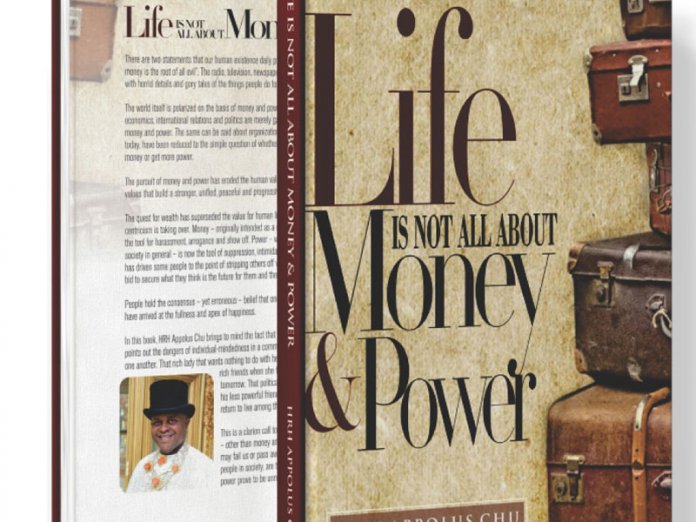 There are two statements that our human existence daily proves to be true: “Power corrupts” and “The love of money is the root of all evil”. The radio, television, newspapers and other information outlets are crammed full with horrid details and gory tales of the things people do for money and power.

The world itself is polarised on the basis of money and power – those who have it versus those who don’t. Global economics, international relations and politics are merely games that countries play with the goal of growing money and power. The same can be said about organizations and individuals. Indeed, most human relationships, today, have been reduced to the simple question of whether or not it can help the persons involved make more money or get more power.

The pursuit of money and power has eroded the human values upon which our society is founded. These are values that build a stronger, unified, peaceful and progressive society.

The quest for wealth has superseded the value for human life, love and dignity of the human person. Ego-centrism is taking over. Money – originally intended as a measure for exchange of goods and services – is now the tool for harassment, arrogance and show off. Power – which ought to be wielded for the betterment of society in general – is now the tool of suppression, intimidation and exploitation. Striving for money and power has driven some people to the point of stripping others off what is rightfully theirs – even their very lives – in a bid to secure what they think is the future for them and their children.

People hold the consensus – yet erroneous – belief that once these two things or either of them is acquired, they have arrived at the fullness and apex of happiness. Yet, some people can have money but not power. Others may have power but not money. Still others may have money and power, but lack something else. Some have money and power, but are burdened with children whose character and attitude rubbish their reputation and bring them reproach in the society and steal away their happiness. Some can spend their whole lives acquiring money and power only to end up with debilitating diseases that money and power cannot heal. Just like the five fingers on our hands are not equal, so too can nobody truly boast to have everything.

In this book, author, HRH Appolus Chu brings to mind the fact that when we are born we are born into a family. He points out the dangers of individual-mindedness in a community where we are created to be interdependent on one another. That rich person that wants nothing to do with poor relatives and poor friends, today; will not be cared for by their rich friends when they fall sick or retire into the home for the elderly, tomorrow. That political office holder who feels too powerful to interact with his less powerful friends and relatives today, will one day lose power and return to live among the same ordinary people he once shunned. That poor person you’re disregarding today could be the one whose support you need tomorrow.

The world turns round and round – when it’s daylight for you now, it might be night time for someone else. In the same way, God can swap things around in a second so that the person you are looking down on today gets elevated into a high office or position tomorrow. That money and power that is making you feel proud, self-absorbed and important can be swapped from you so that you become poor and lowly while those you are looking down on become rich and powerful.

God doesn’t reveal the future great men and women – presidents, governors, business moguls and great captains of industries to anyone. He always leaves them in disguise. Else the wealthy and powerful people of today would easily buy and store them away for their future generations, so greatness continues in their lineage. Herod was ruling over Judea when he heard that a new king had been born, and he did all he could to kill Baby Jesus; but God hid the infant Jesus away and disguised him as the son of a lowly carpenter. In the same way, God has hidden away the great people of tomorrow and kept them in disguise from the rest of the world until the hour of their manifestation – which can come in the twinkling of an eye. That is the mystery of life. The wise persons understand this mystery and try to maintain caution at all times. They are aware that life can swap at any time. They are aware that we are where we are today, because God has given us the privilege. They realize that just because a person is rich and powerful today does not mean that his or her children will be rich and powerful tomorrow. Life can swap it so that their children end up beginning the children of the poor and lowly for basic means of survival tomorrow. The ignorant person on the other hand, comports himself differently. Some of them comport themselves with an I-don’t-care attitude, thinking that they will always be rich and powerful and have such riches and power running in their lineage perpetually. But such an attitude only attracts the scorn and laughter of nature. Nature looks at such people and says, “If only you knew what I have in store for you, then you would care.”

Some people use their money and power to buy influence. They can influence people and the machinery of government, such that when they use their money and power to intimidate, oppress and harass other people they are able to cover the consequences of their actions. If you can cover your actions from men, can you cover it from your conscience and nature? Your conscience is God’s data bank implanted inside of you. It stores all your conversations, actions and thoughts. It is like the data bank of a telephone service provider that stores your call history and even records your conversations – all the government needs to do when they want to prosecute you for an offense is to call up that data base and all your call logs and history can be easily retrieved. Conscience is like a computer hard drive that stores everything that is ever done in that computer. Even when you think you have erased the hard drive, there are programmes that can be used to recall everything that has been erased. So, you can manipulate everything else with your money and power, but you cannot manipulate your conscience and God.

This book is a clarion call for all of us to rediscover those human and social values – other than money and power – that make life fulfilling. Money and power may fail us or pass away, but the human society remains. Our relationships, people in society, are the only ones we will fall back on when money and power prove to be unreliable sources of comfort and happiness. Use your money and power positively and to do good to the human family, because no matter how much money and power you have, they cannot bury you when you close your eyes in death. You will need other people – family and friends– to undertake every arrangement for your burial. It is how you relate with such people now that you are rich and powerful that will determine how they will relate with you tomorrow.

God expects us to live our lives with contentment and to positively affect the lives of others with our money and power – because the truth is that every one of us is wealthy. Every one of us is rich and powerful in our own way. We may refer to one person as rich and the other poor, because the rich person has money and power – yet that same person lacks something that the one we call poor has in abundance. If we learn to be content with what we have, then we are truly wealthy – because anything that gives us satisfaction, fulfilment and happiness in life can be said to make us wealthy. So, pursue peace, pursue fulfilment, happiness and satisfaction that comes from doing what you do for the betterment of humanity. Pursue contentment rather than money and power.

Don’t be carried away by your money and power. Beware! Unknown to you, that person you are dealing with so arrogantly today, might be the next president or head of state, the next powerful and wealthy person on earth.