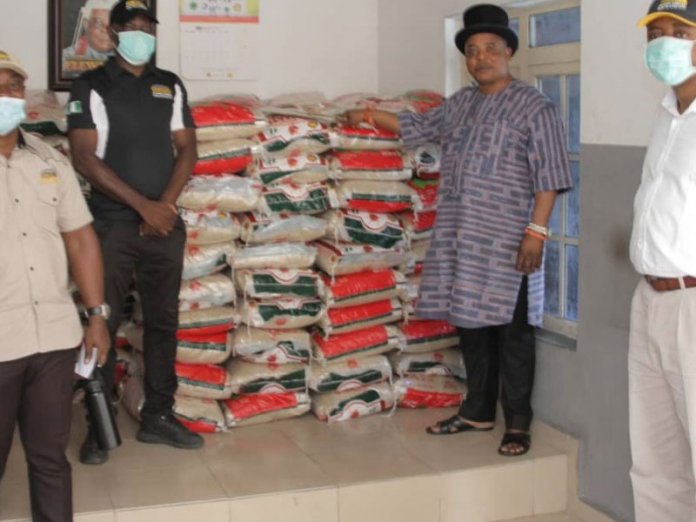 The Oilserv Group of Companies has donated medical supplies and food items in support of government and communities as the country battles the COVID-19 and its socio-economic impact.

While the group channels large numbers of personal protective equipment (PPE), sophisticated devices for rapid medical tests, and other medical supplies to the Presidential Task Force on COVID-19, it is also supplying communities across the country with tons of foodstuff to help families cope with the pains of city lockdowns imposed by government to break the chain of infection.

The company, under the sponsorship of Sir Emeka Okwuosa Foundation, has already delivered over 3, 500 bags of rice and 8, 000 yam tubers to a number of communities in Rivers, Abia and Anambra States as it tours selected communities across the country with food palliatives for families impacted by the lockdown.

The Oilserv Group and Sir Emeka Okwuosa Foundation declared that it became necessary to rise in support of the government and the Nigerian National Petroleum Corporation (NNPC) in the collective effort to contain the spread of the disease and also palliate the impact on Nigerians.

According to a statement, while the medical supplies would be donated to the federal government through the NNPC, which coordinates the Oil Industry Intervention on the COVID-19 pandemic, the group has already started distribution of the food supplies to communities through the Foundation.

According to the company, NNPC was expected to deliver the medical supplies for utilisation by Rivers State, Anambra State, Enugu State and the Presidential Task Force.

In Abia State, Oilserv donated 100 bags of rice to Uzuaku community, another host to the oil firm. In Anambra State, the Group also donated over 3,000 bags of rice and 8, 000 tubers of yam to families in Oraifite and Ozubulu in Ekwusigo Local Government Area. At Umueshi hall Irefi Oraifite, Oilserv distributed food items worth over N40 million. The food items distributed to the people comprised tons of rice and yam.

The Director of the Sir Emeka Okwuosa foundation, Azuka Okwuosa, said the group believes in the power of humanity to solve any challenge, adding that the belief is deeply rooted in commitment to impact lives positively and to support the government at this difficult time.