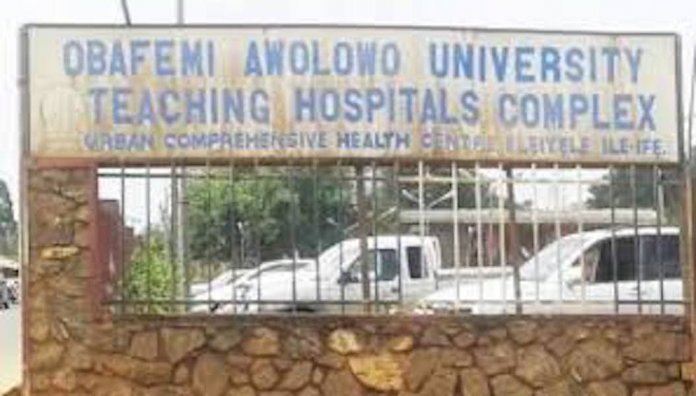 Working for three years without a salary can be distressing especially for married persons with several demands to meet. But that seemed to have been the plight of outsourced workers comprising security guards, gardeners, and cleaners at the Obafemi Awolowo University Teaching Hospital, Ile-Ife, Osun State.

According to reports gathered weekend, the last salary received by this category of workers was in May 2017. Also, from a document by the leadership of the Environmental Health Service Providers Association of Nigeria, the supervisory body of the workers, there are 556 workers in the hospital.

A breakdown of the figure shows that 174 are cleaners and gardeners, while 382 are security guards. The highest-paid workers receive N15, 000 monthly.

The workers are still hoping for the payment of the owed salary even as they continued making efforts to draw the attention of the relevant authorities to their plight.

It was learnt that the affected workers at the tertiary healthcare facility enjoyed regular salary payment from 2007 when they were contracted until 2012 when the contractors were reduced to 12.

But sometime in 2014 however, there were indications of looming trouble when the workers were owed salary for a year. But respite came in 2015 after the outstanding months were paid.

Since May 2017, it was gathered, all the affected workers had been left with memories of the good old days. Four of them, including a director, had reportedly died within the period, while a cleaner was said to have lost her 22-year old son, owing to her inability to raise money for test and operation.

Eleven of the cleaners were said to be down with various ailments and one of the affected workers reportedly lost an eye to a sickness.

It was also gathered that the workers were employed by some contractors relating to the hospital on their behalf.

It was further gathered that anytime there was a delay in the release of funds to the hospital from the Federal Government, the management usually paid the workers from its Internally Generated Revenue.

Speaking on condition of anonymity, one of the contractors, said the matter reached its peak in 2017 following the implementation of the Treasury Single Account, which successfully blocked all alternative means the management explored in the past to pay the workers.

However, the workers, under the aegis of Environmental Health Service Providers Association of Nigeria (EHSPAN), have petitioned the Presidency and the Secretary to the Government of the Federation, Boss Mustapha.

In the petition jointly signed by EHSPAN chairman, Prince Aderounmu Aderemi, and Secretary, Chief Dipo Eluwole, the workers said they were owed 32-month salary totaling N400m by the hospital and pleaded for intervention.

The letter read, “We, the under listed are the representatives of both security and cleaning services providers otherwise known as outsourced contractors at the Obafemi Awolowo University Teaching Hospital Complex, providing aforementioned services at the various arms of the institution in the last 10 years.

“We are constrained to inform you of the current indebtedness of the institution amounting to over N400m (four hundred million) in the past 32 months to the various organizations engaged to provide these essential services.

“The effects of the non-payment of this outstanding on our cleaners/service providers and operations cannot be over-emphasized.

“Information at our disposal indicates that apart from the Obafemi Awolowo University Teaching Hospital Complex and the University of Ibadan Teaching Hospital, other Federal Government-owned health institutions are paying outsourced contractors as and when due.

“We have collectively resolved to appeal and request that you kindly use your good offices to wade into this matter urgently to prevent the currently deprived, impoverished, and agitated workers from taking the law into their own hands.”

He stated that the workers were ready to leave the hospital but their outstanding salary should be paid.

According to him, at last count, four of the workers have died and others are living in abject poverty.

He said, “We got the contract for the cleaning, clearing, and security services in the hospital in April 2007, via government directive that all teaching hospitals in the country should outsource the services.

“Since then our services were paid for, as and when due until 2014 when lapses occurred in the payment for almost a year. But in the year 2015, the government cleared the outstanding.

“In May 2017, the Ministry of Finance invited all the outsourced contractors in the South-West to a verification exercise at the Lagos University Teaching Hospital. The authorities of all the teaching hospitals in the South-West were also invited.

“Representatives of the Ministry of Finance and Health came from Abuja for the verification. After the verification, only one month was paid and since then, nothing has been paid to us as salary.

“When we met the CMD, he said the issue of non-payment of outsourced contractors usually topped their discussion each time the CMDs hold meeting in Abuja and yet no solution in sight. The most worrying aspect of it is that the cleaners are paid N15, 000 monthly. The amount is not up to the minimum wage.”

Asked the profit of the outsourced contractors in the arrangement, Eluwole said the government paid the workers N15, 000 monthly while the contractors got seven percent of the amount for their services.

Saying non-payment of the workers constituted a threat to other workers in the hospital, Eluwole added that some of them in anger threatened to enter the newly renovated isolation center on the hospital premises to contract coronavirus and spread it.

Efforts to get the reaction of the OAUTH management on the issue were futile.