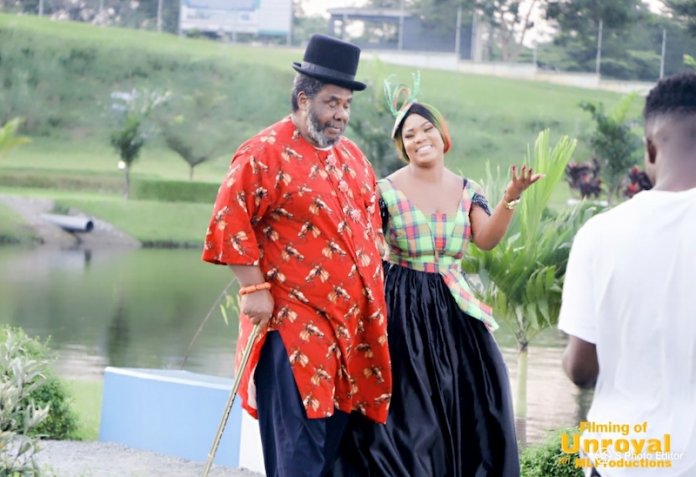 Nollywood movie ‘Unroyal’ shows a seemingly weak king played by Pete Edochie, a queen in despair, and a kingdom on the brinks of collapse. Ferdinand Ekechukwu reports

“It was premiered in PH on the 15th and released on the 20th of March,” prolific filmmaker, Moses Inwang tells this reporter. “It ran for a few days before the lockdown”. The award winning cinematographer steered the making of the movie Unroyal. The star studded movie had started showing at designated cinemas before the lockdown enforced by government following the deadly Covid-19 pandemic. Unroyal is not alone. Nollywood has witnessed inactive days with the stay at home order.

Movies have pushed back release dates. While cinema halls are left empty as movie showings stopped. Would there be any form of re-launch after the lockdown to buzz up the movie before it starts screening again at the cinemas? “Yes there would,” Inwang noted. “There has to be.” Produced by Matilda Lambert, Unroyal stars veteran Nollywood actor Pete Edochie, alongside a host of other Nollywood stars like Shaffy Bello, Blossom Chukwujekwu, IK Ogbona, Linda Osifo, and a host of other actors.

Shot in the city of Port Harcourt (with the rich Okrika culture displayed), the movie is a contemporary royal drama with all the glitz and glamour of the modern day palace and royal lifestyle. Unroyal is a riveting drama of a vile princess. It follows the story of a princess Boma (played by Matilda Lambert) who is from a strong royal family. She has everyone and everything at her beck and call.

This privilege makes her arrogant without respect for anyone or anything. Fate, however, turns her fortune around and in her dying state, she is relegated to the same position she enjoys putting others. As portrayed in the movie, Unroyal projects a seemingly weak king played by Pete Edochie, a queen in despair, and a kingdom on the brinks of collapse. “You will address me as your majesty,” the princess of Okrika says in one of the scenes.

That is truly “Unroyal” as never before has subjects address female offspring of a royal kingdom in such custom. Unroyal is Matilda Lambert’s fifth movie as a producer after her first titled ‘Deepest Cut’. The beautiful actress, a fashion freak, is one of Nollywood’s fastest rising actresses. The University of Abuja Philosophy graduate within a short while in Nollywood has featured in a good number of movies including ‘Career Woman’, ‘Barrista Anita’, ‘Blood and Conscience’, ‘War Against Men’, ‘De Bishop’, and ‘Rough Riders’.

Her journey into Nollywood started in her final year in school during one of ASUU’s indefinite strikes. Her mum then advised that she learn fashion designing to keep her busy since she loves fashion. The next day she went out in search of a good tailoring shop and got one, getting there the manager of the shop told her the requirements. And when she was about leaving, he called her aside and said, “but why fashion design, your good looking and I know you’ll make a good actress, please join the movie Industry”. She laughed it off but later he introduced her to a production house and then the Actors’ Guild of Nigeria-AGN, Abuja Chapter and the rest like they say is history.