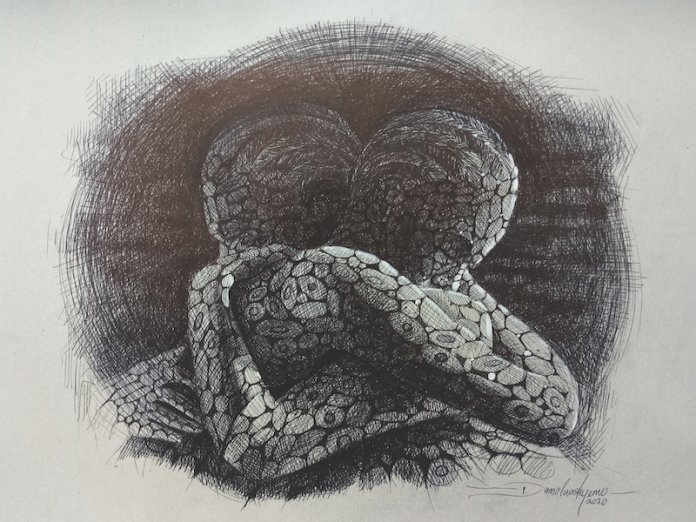 A 14-day challenge, organised by the collective The Artist Ladder for artists, was not only an opportunity for artists to keep visual diaries of the initial 14 days of the lockdown in Abuja -the Federal Capital Territory, Lagos and Ogun states but an inspiration for the artists to position themselves as problem-solvers. writes Okechukwu Uwaezuoke

“Hi, guys. How are we all doing?” chirped the message, which popped up that sultry late Monday (March 30) afternoon on The Artist Ladder WhatsApp group chat. It was from Blessing “Bee” Azubike, who had previously set up The Artist Ladder as “a project under Art for a Reason, Africa — for Support, Opportunities, Education, Liaison, and Career Advancement for Artists and Creatives”.

In existence since six months ago, The Artist Ladder has been involved in the development of artists through branding support and counselling. For instance, it recently connected an artist with a residency opportunity and offered career advancement and learning opportunities to others along the line.
“I know we’ve all been indoors, but the real deal kicks off tomorrow and will go on for 14 days,” the message resumed.

The real deal? She was obviously alluding to the 14-day curfew imposed on Abuja -the Federal Capital Territory, Lagos and Ogun states by the president, Muhammadu Buhari while delivering his long-awaited speech the previous day. This curfew was the logical sequence to the preceding weeks of anxieties and uncertainties swirling around the outbreak of the coronavirus (COVID-19) pandemic in Nigeria. Hence, she launched a 14-day challenge, which required the participating artists on the platform to produce an artwork for each day of the 14 days of the government-imposed lockdown.

Tagged, ‘The Artist Ladder 14-Day Art Diary’ and curated by her, it was meant to be a sort of artistic diary, which would then be shared on social media through the hashtag #TheArtistLadder14DayArtDiary. “It doesn’t have to be anything too elaborate, so it doesn’t take more than 24 hours to create,” she further informed the artists on the platform. “So, it could be a painting, a simple sketch, anything at all that can be created and shared before 6 pm daily…”

The whole idea was basically inspired by the following words attributed to the late American painter and graphic artist Milton Ernest “Robert” Rauschenberg: “… The artist’s job is to be a witness to his time in history.”
Then, she recalled a friend always affirming that the change the country needed would come through the arts. Admittedly, she had no idea how this would happen but absolutely believed that statement.
“As the pandemic took the world by surprise and lingers globally, people turned to political and religious leaders for hope and answers, and I thought to myself ‘who says that artists cannot proffer solutions or give hope in dark times?’ –This inspired ‘The Artist Ladder 14 Day Art Diary’.”

And so the group set to work. Somewhere along the line, the enthusiasm waned among most of the participants. A few resilient ones stayed the course until the final date of the challenge, which was on Monday, April 13.
“It was an exciting two-week journey as we explored the thoughts and creations of these artists regarding the pandemic and relating subjects, including self-isolation, the economic impact of the stay-at-home order, et cetera et cetera,” Azubike reminisced.

“My vision was to see the artists dig deep into their hearts and intellect to come up with powerful messages to be expressed on their canvasses, sheets or whatever medium they chose to express with. I knew a fortnight of staying home would become tiresome for everyone, so I wanted to create pure magic in the form of art.
“At the end some of these works were comforting, and perhaps a ray of hope or sunshine during what may be termed a time of darkness. Others were ‘Lamentations’ – mirroring the conditions and echoing the experiences and thoughts of the populace.”

Like most members of the culture community, Azubike considers the social media the only viable way to keep the creative mills turning under the prevailing circumstances. This is especially so now that the festivals, concerts and exhibitions, among others have suddenly been suspended indefinitely. Hence, the challenge could be seen as her way of getting artists to adjust to this new reality.

During the first seven days of the challenge, she allowed the artists to “soar with their ideas unguided”. This was, of course, with the proviso that they wouldn’t stray beyond the confines of the agreed theme – namely, the isolation/quarantine/stay-at-home exercise.

From the eighth day onwards, the artists were guided by different themes for each day. One of these themes was “If I Were President”, a veiled reference to the vociferous call by Nigerians on the president to address them. This is notwithstanding the fact that the outbreak of the pandemic has left many world leaders groping hopelessly in the dark. “But if the tables [were] turned, would we do any better?” Azubike wondered. “I was basically saying to the artists ‘…imagine you were president; if you wore the crown of leadership or bore the title “President”, how would you bring hope in a trying time such as this? What would you say to the people whom you lead? What would you do differently?’”

Another theme, ‘I’ll Hold Your Hands through This’, compels them to see themselves as solitary rocks in the surging sea of despair. Yes, they may neither have all the answers, nor the powers nor even the ability to put an end to the pandemic. Yet, through their artworks, they could hold their viewers’ hands through the chaos of the present time.

The third theme, ‘Boxed In’, is more like a mental journey into the mind of an artist stuck indoors. How does he or she see the world? Eventually, this question dovetails into the next theme, ‘Who Do You Say You Are?’, which doubled as the self-portrait edition/theme. “My thoughts were that during this period of self-isolation, a lot of people seem to honestly be meeting their real selves for the first time. Before now, the world was in too much of a hurry; it was as though, there was no stop button. Now, this pandemic has hit the world unannounced and everything has been forced to shut down.

“There is too much time on our hands now, and for the first time, many are able to hear themselves, see themselves, spend time with themselves… and it would seem, they are meeting themselves for the first time. In this regard, the artists presented a self-portrait, created by taking an inward look and giving a glimpse into what their reflection was like when they looked into that proverbial mirror. It was also rather interesting as artists usually would have others as their subjects or muses, but rarely ever themselves – and you could tell that a number of them struggled with this theme.”

Looking back now, Azubike affirmed that the feedback was positive – both from both the audience and the artists. “The artists were thankful for the opportunity, and I was glad that one of our goals for the project was achieved, which was to push the artists. Ideally, one piece could take weeks, even months to complete, but these artists were pushed to create daily. They were also pushed to mentally task themselves to work within the scope of varying themes daily, as well as apply themselves to the interesting times we find ourselves.”

Some of the works lift the veil on the inextinguishable flame of hope that burns within every human spirit. Take Azeez Oladimeji Salami’s 42cm x 36cm charcoal on paper entry on April 13, titled, ‘Step Out, See No Evil’, for instance. It depicts a little girl stepping out from a door with both hands covering her eyes à la one of the three philosophical monkeys and, at the same time, expresses the artist’s hope that things would return to normal.

Damola Adeyemo’s April 11 entry – a 14″ x 18″ ballpoint pen on paperwork titled, ‘Gone from Sight, But Never from Heart’– urges compassion for one’s neighbours and positions the artist as a hope-bringer in dark times, where both political and religious leaders have failed.

Finally, Halima Abubakar-Idrissu, in her photograph submitted on Easter Sunday, sympathizes with Christians who are forced to celebrate Easter from home and reminds them that “there is light at the end of the tunnel”.
The Kaduna-based photographer, researcher, archivist and artist, writes: “Don’t stare at the closed door too long.. you’ll miss the window opening.”
Pix: Gone from Sight, But Never from Heart, by Damola Adeyemo.jpg, Blessing Bee Azubike.jpg and Lockdown by Azeez Salami 40cm x 31cm.jpg