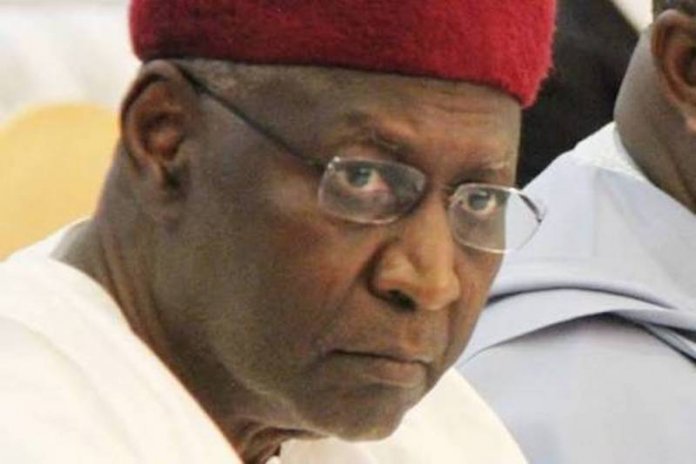 Louis O. N. Edozien
Thee sad news of Mallam Abba Kyari’s death is forcing all of us to reflect deeply on life and its meaning.
For those of us who were privileged to observe this exceptional human being at close range and came to love and admire him, the reflections call to mind contradictions which dissolve as we recollect his extraordinary life.

Abba Kyari was a man of profound Islamic faith. That he attended a Catholic secondary school, or combined his deep faith in God with a rational and thoughtful approach to social issues, based on his Warwick, Cambridge and Harvard education, or maintained friendships across all regional and religious divides, is only contradictory for those who don’t want to reflect on the true meaning of faith in God.

Abba Kyari rose to very high positions in the private sector in journalism, banking (African International Bank as Company Secretary, and United Bank for Africa as Executive Director then Chief Executive Officer), oil and gas (ExxonMobil as a director), manufacturing (Unilever as a director). He understood the importance of virile private enterprise in transforming our lives.

At the same time, he strongly believed in a central role for the State in the rapid transformation we need to make life better for the majority of Nigerians. The contradiction evaporates upon reflection. Private enterprise needs an effective Government to establish a fair system to resolve conflicts, build the infrastructure, safeguard and defend the country, and raise the general level of education and healthcare that a virile private sector needs to thrive. Government has to work for private enterprise to thrive. It is not one or the other.

Accordingly, he was tireless in his efforts, under President Muhammadu Buhari’s direction, to force agencies of Government to work more effectively, without bombast, to get the job done providing these essential ingredients for our national transformation. The extraordinary achievement in agriculture; the seemingly forgotten relegation of the fertilizer distribution racket and debilitating petrol queues to history; the emerging Second Niger Bridge; the Zungeru and Mambilla Hydroelectric projects that are moving inexorably from drawing board to reality, to mention a few things, bore his signature and result-oriented method.

The work is far from finished. We will sorely miss his energetic guidance to complete the job.
Abba Kyari was a privileged member of Nigeria’s elite. But he lived a spartan life and he challenged the elite to remember that most Nigerians are poor, and lack access to education, health care, power and other amenities. This Administration’s commitment to raising 100 million people out of poverty was the stuff that captured his mind. There is a contradiction only in the minds of those who refuse to learn from history. A rich, privileged elite cannot safely and long endure as an island in a sea of misery and poverty. Who will keep reminding us of this?

The orchestrated, stubborn smears about the man’s character and actions as a senior officer of Government don’t jive at all with the noble qualities that were plain to see for anyone who interacted with him on an issue. He focused on substance, not form; on results, not stories; on the national interest, not selfish interests. His work ethic from the days I knew him at UBA are exemplary. A little reflection dissolves the contradiction. The purveyors of the smears have either not interacted with the man Abba Kyari at all, or they have taken their narrative from people who wished in vain he would compromise the public good to satisfy a private interest.

I have had the rare privilege of working closely with this extraordinary man since he was an Executive Director at United Bank for Africa. I am proud to say he was my friend, my big brother and my role model.
I will miss him. His family will miss him more. Nigeria will miss him most, at this troubled time when his unique qualities are sorely needed but in short supply. God will help us.