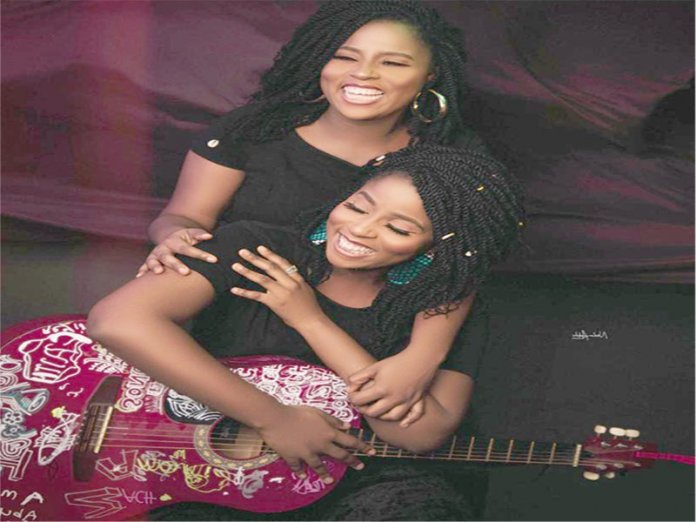 Funny and witty are two words that describe adorable twins, Oiza and Meyi Abu. They are the daughters of former Nigerian Television Authority (NTA) broadcaster, Eugenia Abu. The singers have been setting Instagram on fire since they started their bathroom sessions. Vanessa Obioha writes about their rising profile

Last February, popular celebrities tweeted about identical twins who perform music in their bathroom. They encouraged their fans to check them out on Twitter and Instagram. So, the search began. Who were the twins? Where did they come from? Who were their parents? It turned out that the twins Oiza and Meyi were the offspring of former Nigerian Television Authority (NTA) broadcaster, Eugenia Abu. This knowledge increased the traffic on their social media pages which are filled with images and visuals of their creativity. They also garnered an impressive number of followers. Their official Instagram and Twitter pages boast over 13,000 and 12,000 followers respectively.

It’s difficult to tell the twins apart. They are identical such that their mother once wrote in a publication that it took her a while before she could identify them. That striking resemblance is an intriguing part of their artistry. Not a few fans have trouble distinguishing one from the other. The twins sometimes in their videos introduce themselves to save fans from the mystery.

Oiza and Meyi evinced their passion for music at an early age. Oiza recalled that they started singing at the age of five and wrote their first song when they were six years old.
“It was a Christmas-themed song called, ‘Santa is Coming, Shake Your Booty’ which at the time we thought meant the same thing as ‘Santa is coming, shake your body’. It was a very awkward Christmas dinner when we performed it for our family.”

The twins considered themselves members of a musical family. Meyi disclosed that their grandmother, father and elder sister sing beautifully but never pursued a career in music.
However, their mother and the rest of their siblings are musically inclined and helped them in creating harmonies and sharpening their lyrics. Though they listened to legends like Fela Anikulapo Kuti, the twins revealed that British singer Adele and Nigerian-French singer Asa influenced their music.

Although none of them studied music — Meyi is an artist and a textile designer, Oiza is a theatre director — they never stopped making music. Before their fame on Instagram, they used to perform for their mother at their events and with a father who works in the theatre department, they learnt how to use the stage well. The first stage performance that fetched them a level of recognition was a variety night show at Holy Trinity Catholic Church, Abuja in 2010. Since that encounter, the twins have never paused in their musical pursuits. They go wherever the music takes them, including Instagram where they finally found fame.

People are used to watching musicians perform on stage, living room, studio, bedroom but the bathroom, a place reserved for amateurs and wannabes? Rarely. Yet, Oiza and Meyi chose this particular part of their home to entertain their fans.

“It was actually Meyi who came up with the idea sometime in January,” explains Oiza. “We both had makeup on at the same time when we had nowhere to go (a rare occurrence) and she said to me ‘let’s do a video’. She dragged me to the bathroom and that’s how the idea was born. The sound we had in the bathroom is very close to a professional sound because of the natural reverberation. So we just stuck with it.”

That ingenious idea fetched the twins instant fame. Everyone started talking about the twins performing music in their bathroom. The Yahooze crooner, Olu Maintain, was the first to pay them a compliment.
“We were so excited when we saw it,” gushes Meyi. “We made a noise that day such that our siblings were tired of hearing our voice. We might even frame the comment and put it on our night stand.”

2Baba and Sound Sultan later joined, sharing their videos with their numerous fans. Then, they got a shout out from Mexico, the girls nearly died of excitement. The spread of their music only proved to them the power of social media.
“Social media provides an avenue for more direct feedback between us and our audience,” says Meyi.

“With the right content and targeted audience, Instagram acclaim can become tangible appreciation,” adds Oiza.
Already, some of their friends, Taoma and Maraji, gained endorsements from their content on Instagram, the twins are optimistic that they will get more opportunities after the pandemic.

What attracts most people to the twins is their funny and witty style of delivery. The duo who perform acoustic music — because they believe it’s the easiest and cheapest way to present music in its purest form — are often seen in the bathroom, dressed fashionably with Meyi playing the guitar. Sometimes they start with light banter, other times they launch into their songs (some are originals, others are covers of popular songs) filled with witty and sarcastic lines.

For instance, in ‘IJGB’, an acronym for people who just returned from abroad, they talked about the mannerisms of such persons. One of the lines reads, ‘I just got back from Spain because you flew first class, you now pretend you don’t know my name. This boy is insane.’

“Actually our lyrics are not intentional at all” explains Oiza. “We’ve always been considered witty and most of our songs reflect the everyday experiences of our lives packaged with funny things. We just write what we see.”
The theatrics they add to their performances make their music more enjoyable and relatable.

Apart from their music videos, the twins never fail to post funny skits about their family. If they are not hosting a quarantine house party, they are having a cooking competition.
With most people forced to stay indoors due to coronavirus spread, the twins revealed that they are ‘managing’.

“Our mother drew up a timetable of games and activities for each day,” says Meyi. “It’s fun to be around family all the time. It brought us closer.”
Oiza adds that “Meyi is the game master. She makes moves.”

They also wrote a song COVIDIOT which they uploaded on their Instagram page. The satirical song encourages people to stay at home during the lockdown.
As their fans await a body of work from the twins, Oiza and Meyi who are not under any pressure to produce an album, will in the meantime keep entertaining their fans with their bathroom songs.