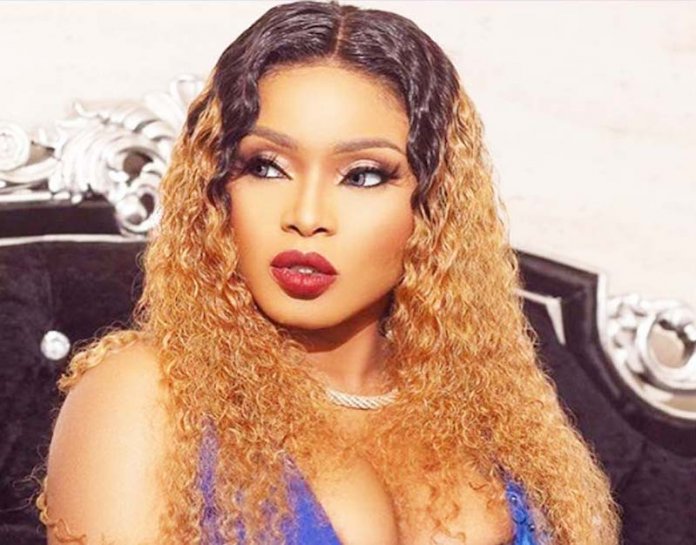 From when she shared a video of her new whip, then to her pregnancy news a month later, to giving birth, actress and film producer, Halima Abubakar, the lady that is always in the trends, sure has had a marvelous moment of late. Ferdinand Ekechukwu reports

Congratulations are in order for controversial screen diva Halima Abubakar. She is the latest celebrity mother in town as she welcomed a baby boy. The Nollywood actress welcomed her bundle of joy on April 3, 2020. Halima who announced the news on social media received torrents of congratulatory messages from her fans and colleagues; some said it was hard keeping the secret. “A gift from God and I will cherish you for life’s biggest miracle. A Boy 3/4/20,” she wrote alongside a photo of his cute little fingers tending hers.

Halima, the lady always in the trends, has had a swell moment of late, with a lot to be thankful for. A few months back in November 2019, the happy mother had announced she was expecting a baby. She wrote at the time: “Smile of gratitude and am expecting a Lil Minnie Motherhood.” However, the identity of the man she was pregnant for was not revealed.

Many had seen the photo she used on her child’s arrival and assumed the baby in the picture was hers. However, days afterwards, the actress is now being accused of stealing a photo of another baby to pose as hers on Instagram. Halima was called out on Thursday by a mother in the United States who claimed that she stole the photo from her page. The disgruntled mom identified as @the_arielb on Instagram said, “I guess we are now famous in another country.” She then went on to write, “I will not edit, delete, or censor my page because of the simple mindedness of others.”

Ariel went on to share screenshots of conversations between herself and Abubakar where she appealed to the actress to take down the photo of her baby from her Instagram page. The disparity in post times on Instagram shows that Ariel posted her photo on March 13 while Halima posted the same photo some weeks later, in April. Screenshots of direct messages conversation between Ariel and the actress shows Abubakar admitting that she only posted the photo to announce her child’s birth.

She also shared a screenshot of her private Instagram message with the child’s mom who challenged the actress for using her baby’s picture. In the screenshot, the movie star could be seen apologising for using Ariel’s baby’s photo adding that she found it appealing. Halima said: “Hi, I am so sorry about this inconvenience. I had my baby last week and googled baby pics to use to illustrate my baby had come before I take pics of mine. I saw the beautiful baby nails and couldn’t help but use it. I never claimed the baby was mine, I don’t understand people on social media these days. I apologise for this. I will delete the picture. Congratulations on your baby. God bless.”

The development generated heated backlash on social media, with many Nigerians criticising the film star for her action. Reacting to the criticism on Thursday, a remorseful Halima explained she expected people to hear from her before bashing her. She said she could not post a photo of her newborn because of his condition. Reacting via her Instagram page, Halima said she had her son a premature and could not show the world a fragile child. She said her son is still in Intensive Care Unit and will be dischared Friday April 9 from the Intensive Care Unit (ICU).

What her fans and followers could not understand is why she did not yet again acknowledge the father of her son. Halima might just be another baby mama. And perhaps have disappointed her fans. Some three years back, the Kogi indigene ruffled her fans when she claimed that she was a virgin and cannot wait to have sex and begin to have kids.

Then 31, in the revelation, Halima laid bare her mind on marriage, causing a myriad of mixed reactions and comments from her fans and followers. Some of her fans and critics poured out their minds on her revelation and wouldn’t buy her virginity claims. But that was left for them.

However, life for the Northern star has changed for good despite the state of the world as a result of the global pandemic at the moment. The 34-year-old started her acting career in 2001, starring in a minor role in ‘Rejected’.

She, however, amassed huge popularity after featuring in ‘Gangster Paradise’, where she played the lead role. She has since continued to blaze the trail in the movie industry featuring in several other Nollywood films including ‘Slip of Fate’, ‘Tears of a Child’, ‘Secret Shadows’, ‘Area Mama’ and ‘Men in Love’. Beyond the bounds of Nollywood, the actress has also carved a niche for herself in the music industry, owning Modehouse Entertainment, a music label and entertainment management company.

Talking about her record label, relationships, her age and finding the right man, Halima had opined that she wasn’t exactly in a hurry to tie the knot.

On settling down, she said: “Will I ask a man to marry me? Is it not when you see the man that you want to settle down with that you can decide to marry? You can’t just settle down with anybody because you need to marry. I don’t want to go into marriage and rush out of it.

There is a lot of mistrust and we also have so many irresponsible men so to speak.

“There are lots and lots of liars among men out there. And if they meet a girl that really loves them, they won’t know because they are used to lying. So, they think any woman they meet is also a liar like them. Or if you omit any information about yourself, if they now get to know later in a negative way from another person, it’s mistrust.

The day you even say the truth and nothing but absolute truth, they won’t believe you omitted something before it came out, and it’s not like it’s a dangerous thing. But just because you forgot to include the information when you’re chatting with them, it will now become a big problem.”

Continuing, she said, “A sort of mistrust will develop from there. And when a man is monitoring you, definitely, there is no trust in that relationship, and nobody will want to be in a marriage where there is no trust. The relationship would just work only when the partners trust each other. We just pray we meet the right person. I mean all of us who are yet to marry. You may meet someone you so much love and he is not convinced you love because you are actress. And now, because you are an actress you are not responsible.

“And I keep saying, does it mean because you are, you aren’t responsible? Or you think every girl on the street will behave the same way like the other person? I don’t know.

There are so many hypocrites in relationships. There are too many people that like to give fake information. And it’s unfortunate that some of us have seen people who tried as much as they could to ruin other people’s relationships. But the truth is when a man loves you, he loves you. A man who is ready to quit because of one rumour or the other is never in love with you.

“So you can’t force love. How long can you do that? I mean, especially if you are a loyal woman because I know a lot of women who are responsible, who are faithful to their partners, they are faithful and I keep saying is it because you are not faithful? Is it because you as a man is a liar? I just think you don’t suspect somebody to be unfaithful if you’re not. That’s not life. Really, I have not been in too many relationships, that’s one. Number two, even if I say that, a lot of people will click on that and it’s a lie.

“And I am a loyal person. I don’t like somebody who pretends to be what he’s not. I am not in a hurry the way people are in a hurry on my behalf. That’s because at the end of the day, I am the one that will live with the man not them. And I wouldn’t want to cry to sleep.

I wouldn’t want a man who will make me cry every day, instead of making me happy. Left to me, I will do everything to make him happy but is he really going to reciprocate that? It has to be a balanced relationship but there is nothing like that. I am not hoping. It’s going to happen when it will happen.

I am not searching for a husband. So don’t quote me on that, I am just going to tell you and as usual I don’t talk about any relationship. I am just giving you a general insight of what life is about.”