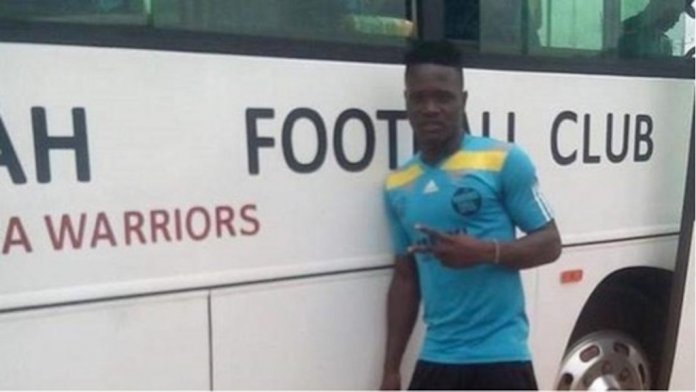 December 2018 at the Lafia Township Stadium. A friendly was underway between Nasarawa United and FC Abuja. Midway through the game between top-tier Nasarawa and the lower division side, FC Abuja’s Dominic Dukudod slumps on the field.

Efforts to revive him are both limited, with first aid applied, and in vain, with Dukudod – who suffered what is believed to be a heart-related issue – dying as he is rushed to hospital.

Despite there being a defibrillator in the stadium, eye-witnesses do not recall the device, which can restart a heart in case of sudden cardiac arrest, being used to treat the player.

As warnings go, this was as clear as it gets – but the message went unheeded.

Fifteen months on, Nasarawa are playing at home again as the relegation-threatened side take on Katsina United on 8 March, exactly one month ago.

In midfield for the hosts, Chineme Martins is desperate to make an impression – having sent his brother a picture of the league table prior to kick-off with the words “watch this table after this match, we are lifting again”.

Nasarawa had propped up the league just weeks earlier but now the ‘Solid Miners’ could escape the relegation zone should they win.

Three unanswered second-half goals for the hosts enabled them to climb as high as 13th, four places clear of relegation in the 20-team league.

At the final whistle, home players lay on the floor in tears yet these were not celebratory, but sobs and wails instead.

For two minutes before half-time, 23-year-old Chineme had collapsed – unprovoked – on the pitch, leading to his death.

“He said he was playing his heart to remove Nasarawa from relegation,” said Chineme’s elder brother Michael. “That was the gift he wanted to give the club.”

Unfortunately, not only did his heart appear to have issues – which an autopsy should address – but his efforts were seemingly unreciprocated too.

How else can one explain that the club’s sole defibrillator was still undeployable, even after Dukudod’s death?
“There was a defibrillator present at the stadium but we couldn’t use it because it was no more in order,” Abdul Suberu, Nasarawa United’s club doctor, told BBC Sport Africa.
Ill treatment

It was one of a catalogue of failures that prevented Chineme from receiving the medical treatment he deserved.
There was also his questionable on-pitch treatment, the general off-field facilities available and the pitch-side ambulance failing to start.

But what of the defibrillator, which is often critical to the recovery chances for anyone suffering chronic heart-related issues?

Nearly two dozen Nigerian footballers have died of heart-related issues in the last 25 years, both at home and abroad, so having a working defibrillator in a top-flight stadium might appear a must.
Not so.

Nasarawa’s defibrillator had been given to the club in 2015 by the League Management Company (LMC), which runs the Nigeria Professional Football League (NPFL).

Yet its maintenance was not upheld by Nasarawa, even though league rules stipulate that home sides must ensure that a defibrillator is ‘available for use throughout each league match’.

Not even the match commissioner could tell the BBC whether there was a working defibrillator in the ambulance that day – despite both club and regional state FA doctors signing a document prior to kick-off to suggest that all required equipment was present.

“All I know is I looked at the ambulance, I saw a stretcher, a driver – and then the club and FA doctors confirmed everything was in order,” said match commissioner Christian Mbah.

“This was even written down and both signed (the document) – everything is there.”

Yet when emergency action was required for Martins, the appropriate response was deeply lacking.

Nasarawa doctor Suberu stated that “both clubs’ medical teams and even supporters rushed in to save him” – so smashing rules stating that only doctors, physiotherapists or paramedics can attend an on-pitch medical incident.

Attempts to administer cardiopulmonary resuscitation (CPR) also failed, with video footage showing the most gentle of CPR being applied at times.

“Even to administer CPR that a layman could do, the so-called personnel they had could not administer,” said brother Michael, who works in the fire rescue services.

“There was also no proper ventilation for the boy. The crowd covered him using a cloth to fan him – a cloth! It’s just the ‘Nigerian factor’ – nothing was in place when it happened.”

“We tried our best medically,” he explained. “We applied CPR and first aid, but he didn’t make it.”

While the absence of defibrillators and suitably-trained medical personnel did not help, nor did the fact that the ambulance would not start, prompting stewards and others to push the Peugeot 406 in a bid to jump-start it.
“The State FA brings the ambulance and is responsible for the ambulance,” said Suberu.

“The club doctors work with a specialist hospital to get the ambulance – that is why we release all the funds to (the clubs),” Mohammed Alkali told BBC Sport Africa. “Club medical staff arrange the ambulance, not the FA.”

League rules state it is the home club’s duty to ensure the availability of ‘a fully equipped … ambulance suitable to carry an emergency casualty and staffed by a person or persons to perform essential emergency care.’

Nonetheless, many clubs still rely on wealthier State FA’s to help out with medical provisions – with match commissioner Mbah also saying this was what happened on the day Chineme died with regard to the provision of the ambulance.

Chineme Martins had had pre-season medical tests, including on his heart, at Nasarawa United
Mbah also said he asked the driver to start the ambulance before the game, with the vehicle passing its test.
In Martins’ hour of need though, it did not start – so leaving the final ignominy as his limp body used not an ambulance but a vehicle belonging to the Nasarawa State governor, who witnessed the event unfold, for the journey to hospital.
And herein lies the final twist given that accounts differ about where Chineme died – with the club saying he ‘finally died in hospital’ while an eye-witness, who requested anonymity, claimed ‘he was dead’ before he left the stadium.

Reaction
Whatever the truth, one inescapable fact is the grief that has descended onto the Martins’ family.
“We used to chat every day,” says Michael. “Sometimes I just burst into tears. I spoke to Mum the other day and as soon as she started talking, she started crying.”

“Let me call it ‘the Nigerian factor’ that something must happen before they take a proactive step, but why must it be Chineme?”

Wednesday marks exactly one month since Chineme died – with the Nigeria Football Federation (NFF) report on both the reasons for his death and further possible steps expected shortly.

Following the tragedy, the NFF swiftly announced stricter measures: that no match could start without a full complement of medical equipment and personnel, and not until all facilities have been tested by both the Match Commissioner and local State FA.

For his role in the match, Mbah has been permanently suspended – primarily for his failure to ‘ensure all requirements including medical personnel and equipment are in place before allowing the match to go ahead’.

Nasarawa themselves were also sanctioned – fined just over $15,000 – for breaching a host of rules, from not acquiring the sufficient numbers of doctors and paramedics for the game, allowing too many people on the field mid-crisis and for procuring a non-operational ambulance.

Rubbing salt in the Martins family’s wounds was the fact that Nasarawa’s next home game featured not one fully-equipped modern ambulance – but three.

Three ambulances were present at Nasarawa’s first home game after the tragedy, when there had been just one
“The personnel – are they trained?” said brother Michael. “That’s the question to ask.”

As Mbah himself points out, why is a non-medically trained Match Commissioner tasked with verifying medical equipment when a more qualified expert, such as the State FA doctor, could do it?

“Those things might by physically there, but how would I know if it’s working?” he ventured. “By Nigerian standard, the whole thing that could make a good match was in-tact.”

And therein lies the problem, many would say – with both medical and security standards having been too low in the league for far too long.

“Martins’ demise should be a wake-up call to Nigeria’s professional football clubs and all stakeholders,” said Amobi Ezeaku, the team manager of top-flight Enugu Rangers. “I have attended over 100 pre-match meetings in the league.

“During these meetings, questions are asked as to the availability of doctors, ambulances, stretchers etc. Some will say they have one doctor, which turns out to be (a) blatant falsehood.”

“Now that we have a sad case on our hands, we all have to embrace the truth and strive to do more not only in the field of medicine but also in safety and security.”