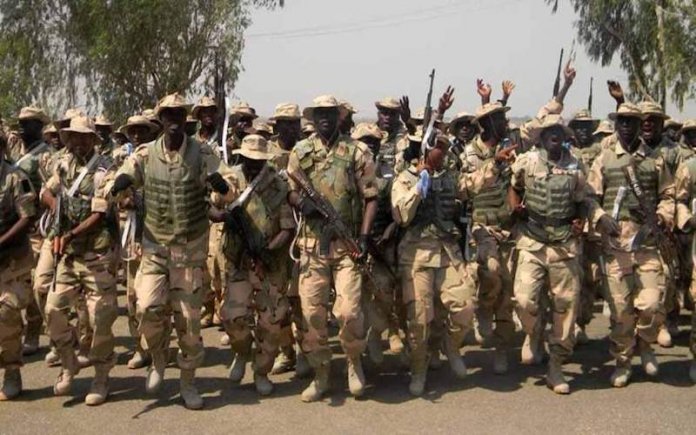 This is coming as the Nigerian Navy yesterday recovered 140 litres of stolen crude oil from an illegal oil refinery site in Warri, Delta State.
The troops had a fierce encounter with the insurgents at Kure village along Tumbun Rago and Tumbun Fulani general areas of Borno State.

“In continuation with the ongoing clearance operations in the North-east theatre of operation, combined troops of 403 Special Forces Brigade Baga, Niger Republic Troops supported by Air Task Force of Operation Lafiya Dole had a fierce encounter with some Boko Haram/ISWAP elements at Kure village along Tumbun Rago and Tumbun Fulani general areas of Borno State.

“Consequently, the terrorists were decisively dealt with during the encounter. The terrorists suffered heavy casualties and unconfirmed number escaped with gunshot wounds,” it said.
The troops recovered one gun truck, one anti-aircraft gun, one motorcycle.

Other recovered items are one light machine gun, one AK 47 rifle and a magazine, 227 rounds of 12.7 mm ammunition and 10 rounds of 7.62 mm special ammunition.
It noted that there was no casualty or equipment loss by the joint military forces.
The statement urged the public to continue to cooperate and support the security forces with credible information that could aid or hasten the completion of the ongoing clearance operations.

Meanwhile, the Nigerian Navy has recovered 140,000 litres of stolen crude oil in Warri, Delta State.
The discovery was made by the Nigerian Navy ship, Delta, whose patrol teams conducted anti-crude oil theft and anti-illegal bunkering operations in its area of operation during the week.

The update on naval operations signed by the Acting Director, Defence Media Operations, Brig-Gen. Bernard Onyeuko, said the patrol team located an illegal refining site around Opumami in Warri South LGA of Delta State.
It said the site had 30 ovens, 40 receivers and 16 dugout pits cumulatively laden with about 120,000 litres of product suspected to be stolen crude oil and 40,000 litres of suspected illegally refined AGO.

“The same day, the team discovered another illegal refining site around Opumami general area. The site had two ovens, one receiver, 8 x 250 litres metal drums and one dugout pit cumulatively laden with about 30,000 litres of suspected stolen crude oil and 25,000 litres of product suspected to be illegally refined AGO,” it said.

Also, a Nigerian Navy ship, Dorina, while on a routine patrol arrested a fishing trawler, Hajiya Binta, for operating in Nigerian waters without its Automatic Identification System (AIS).

The arrest was effected about five nautical miles off the Escravos breakwaters. Upon interrogation, the captain of the vessel affirmed that the AIS of the vessel was not operational as at the time of the arrest because it developed a fault while on the sea.
Hajiya Binta was handed over to NIMASA officials on March 31, 2020, in line with due process.

I’m Not for ‘Fire for Fire’ Politics, Says Osun Gov