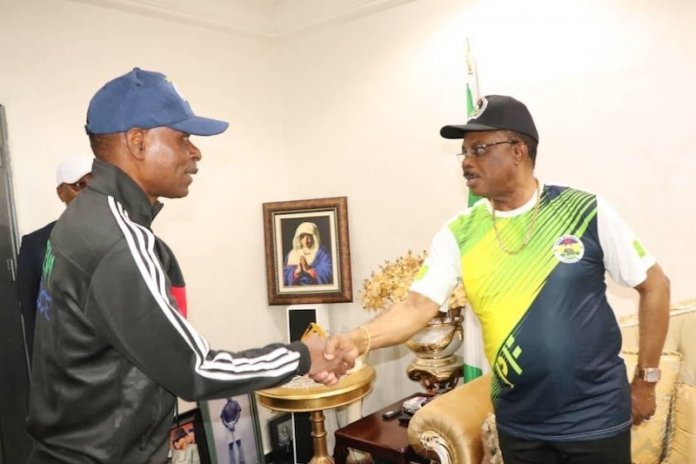 Recently, Anambra State stood still for one week as it hosted the 2020 police games in various locations across the state. David-Chyddy Eleke who covered the events, reports that besides the frills and thrills, it was a period of economic boom for residents of the state

On February 29, the opening ceremony of the 12th biennial police games, tagged Anambra 2020 was held at the Dr Alex Ekwueme Square, Awka. The very colourful ceremony was the first in the South-east zone of the country, and had venues for various sporting activities scattered across various sporting centres in the state. The host of the game, Governor Willie Obiano of Anambra State, spared nothing to ensure its success.

From ensuring that sporting facilities in the state were made available, to building new ones, all hands were put on deck to achieve a hitch-free event. Obiano was also everywhere in the state to inspect facilities to be used and also to supervise work in some of the facilities that were then being newly built for the games. Among the facilities that were newly constructed for the event was an Olympic-sized swimming pool, volleyball and basketball courts, which were within one week constructed just for the competition.

There were initial doubts about the hosting of the games as some pundits believed that hosting it would mean pumping state resources into it, without benefits. Some critics even called out the governor for using state funds at a time of lack to spend on police, which is a federal agency, and has allocation from the federal government, from where it can pool funds to finance the event.

But the typical Obiano was thinking above that. An astute banker, a chartered accountant and auditor of international repute, one can say that what Obiano was seeing in accepting to wholly host the games, was far away from the thoughts of the ordinary Anambra people.

For example, even before the game started, Obiano had made a projection of the number of athletes expected in the state, and the number of visitors the games will attract to the state. During an interview with journalists, he said, Anambra State will make at least N1.5bn from hosting the games.

He had factored in the fact that the visitors and the athletes would pay for their accommodation for seven days, feed at least three times a day for seven days, buy fuel from fuel stations in the state, or even patronise transporters who in turn buy fuel, or spend money on other things. Obiano did not also forget that the period will be one of merry making as visitors will patronise drinking joints and other social facilities in the state

Already conversant with figures, he said during the games, “We have about 15,000 people who came into the state from outside for this games. We also have about 3,000 police athletes. If each of our 15,000 visitors spend at least N100,000, we will have fresh N1.5billion which has been injected into the state economy. The police guys enter buses here and pay, the bus driver buys fuel, the fuel seller buys fish and so money keeps circulating. It is to the glory of God that we are hosting and we thank God they chose us and everything is working seamlessly for now.”

Corroborating Obiano’s stand on the economic gain of hosting the games, an economist, Mr Francis Ndukwe said, “What Obiano thought in hosting this game is perfect. He was only thinking of improving the welfare of the people because the N1.5billion he mentioned may be even more, but what people do not understand is that government did not make the money, they simply created an avenue for citizens to make money.

“If Obiano spend N200million to host this games, what it means is that besides the facilities built, he merely sponsored it to lure the visitors to bring N1.5billion into his state. It is called economic sense.”

True to this, in every centre where events were being held, it was as if a new market had been created in such places. Trust the average Anambra man and his entreprenuirial spirit. In all the centres visited by this reporter for the event, mini markets were immediately established, and brisk businesses made, to the gains of the traders in the state. Not only were drinks, snacks sold, books, cloths, shoes and other household items found their way to the centres for sale.

Speaking on the facilities, Obiano said, “The hosting right has helped the state to upgrade its facilities and even build new ones. Some sports writers who saw what we have here have already approached me, and they are happy with the facilities, and they have told me they want to host some games here.

“Through this game, we will produce lots of Onyalis, Ajunwas and lots of them. We will ensure that the facilities are there for people to keep training after now, but we will schedule the time when the facilities will be opened for training. Through this games, we now can boast of being among the states that have an Olympics sized swimming pool, and you know it is the only one in the South-east zone for now. These are our advantages,” Obiano said.

For seven days, from Oba in Idemili South Local Government Area of the state, where the track and field events were held at the Rojenny Tourist Village, to Otuocha in Anambra East Local Government Area where the football games held, to Mbaukwu in Awka South, to Golden Tulip Hotel in Anaocha, Oma Events Centre and Dr Alex Ekwueme Square both in Awka South, and several other centres, the state was brimming with visitors throughout the period of the games.

An elated Inspector General of Police, Mohammed Abubakar Adamu speaking at the closing ceremony of the games, declared that the Anambra games ranks among the most colourful since the games started in 1946. He thanked Governor Willie Obiano for hosting the games, stating that all promises made by the governor towards the hosting of the games were fulfilled.

“This game started in 1946 and has become regular event and also produced global sporting stars. We assure you that new stars have been discovered in this very game and I commend the athletes. I am proud of you all and I commend you for your composure. Thanks to Governor Obiano for hosting us and also ensuring he met all the promises. Awka 2020 is the best in recent times and a clear testimony of the state governor’s strength.”

Obiano, a thorough showman left nothing behind ensure that the event was colourful. The event which snowballed into the night showed a well lit Ekwueme Square, besides the decorations with a combination of the Nigeria Police Force colour and that of Anambra State.

Top-rated musicians were also brought into the state to perform for the night, and beyond being a closing ceremony, turned out to become a place for fun seekers to catch their fun.

Speaking at the event, Obiano said, “It is a thing of pride that an event of this magnitude took place here for one week and there were no sad incidences. What this games has shown is that in just one week, we can rewrite the history of Anambra, and that is what we have done.”

The highlight of the event was at about 7pm when for about 45 minutes, the state stood still as fireworks of all kinds rent the skies of Anambra, giving the state an aesthetics that was totally out of the world, and intermittently breaking into several colours, high in the sky, leaving all in awe. Popular musician, Flavour was immediately called to the stage, and after close to an hour’s performance, Obiano and his wife hit the stage, displaying dance steps that showed that their youths were not only spent in speaking money at Fidelity Bank and Texaco where Obiano worked as top staff of both organisations.

James Eze, Chief Press Secretary to the Governor who spoke to THISDAY on the event said, “What has happened here today is an expression of joy by Ndi Anambra. For seven days the state was shut down for this games, and not even one disappointment or sad incident was registered. You may think it is a small feat, but it is not. Many state’s won’t be able to do this. Just see the governor and his wife dancing on stage, it is an expression of their happiness and fulfillment about this event. Even the police authorities are marveled at the taste of the governor. It will take Anambra decades to find a governor as colourful as this one again,” Eze added.

For him, this year’s games was an ample opportunity for relatively unknown police sportsmen to announce themselves, their talents and competences to the world as it served as a platform to discover sporting talents in the Nigeria Police who would re-enact the heroic and historic performances of other police legends.

The games, apart from promoting camaraderie among police officers, he added that it would undoubtedly enhance the physical and mental fitness of the participants.