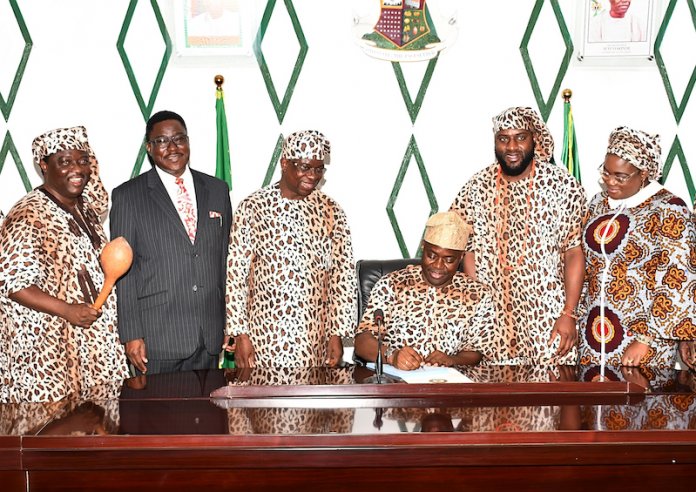 At the occasion, he reiterated the determination of his administration to provide a safe and secure state for investors.
He warned criminally-minded elements to stay away from the state and the South-west.

The governor said the Amotekun law was a product of effective planning, strategising, engagement and alignments among the six states of the South-west geopolitical zone.

He called on investors to come to the state, noting that the environment is secure and safe and that his administration would guarantee high returns on their investments.

A statement signed by the Chief Press Secretary to the governor, Mr. Taiwo Adisa, quoted the governor as saying that Amotekun was not created to replace the federal security system.

He noted that the security system had gaps in terms of funding and personnel, adding that the Amotekun security outfit is meant to complement the efforts of the nation’s security agencies.

The Oyo State House of Assembly had passed the bill into law last Tuesday.
Makinde while signing the bill into law, said: “This is not a replacement for the traditional security agencies. We saw that there are existing gaps in the funding and even in the number of personnel employed but we have to secure our people. This is meant to complement the effort of federal security agencies.”

The governor noted that with the state’s newly-introduced security architecture and the new Amotekun initiative, the long arm of the law would always catch up with criminals.

He lauded the security agencies in the state for the good work they had been doing in securing lives and property, saying security remained the major duty of the government.

The governor appreciated the House of Assembly for its promptness in the handling of the bill, adding that the speed and thoroughness they deployed underscored the importance attached to the bill.

“What we are saying is, let us join hands to have a secure environment. We want to give assurance to our investors. I was in Florida last week for business engagements and the responses have been great, and this is one of the things I promised them at that event.

I told them to come because we know investors’ money avoid places that are not safe – it runs away. So, we are providing a safe and secure business environment in Oyo State. Investors should please come and we guarantee decent returns on their investments,” he stated.