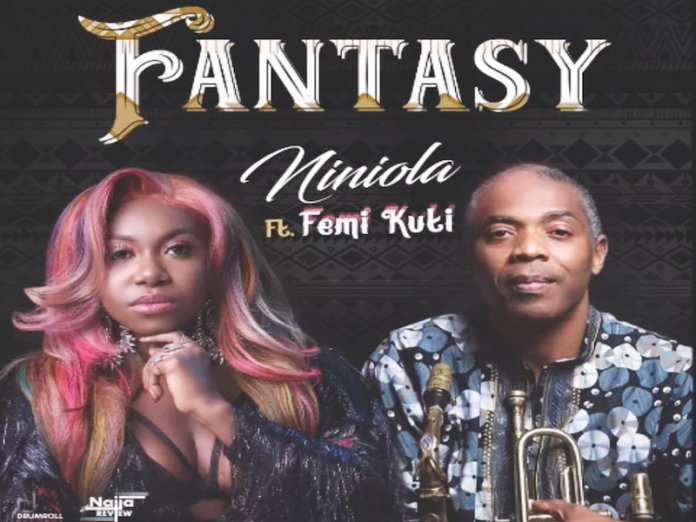 Nigeria’s Queen of Afro-house music, Niniola (Niniola Akpata) joined forces with Afrobeat icon, Femi Kuti to drop a new single ahead of her upcoming sophomore album. On the track, Fantasy, the songstress fuses her trademark vocals and Afro-housestyle with the distinctive saxophone sound of the four-time Grammy nominee. Ferdinand Ekechukwu reports

Singer/songwriter, Niniola Apata is working on her sophomore album. That alone should excite fans and lovers of the queen of afro-house music knowing the stuff she’s made of. The singer who simply goes by her stage name Niniola on this upcoming album has worked with legendary afrobeat musician, Femi Kuti to deliver on a new single, Fantasy.

The Ibadi crooner fuses her trademark vocals and Afro-housestyle with the distinctive saxophone sound of the four-time Grammy nominee and pretty excited working with Femi, the scion of Fela Anikulapo Kuti. To the songstress, collaborating with the Afrobeat icon is a dream come true. “Femi Kuti is a legend in every sense of the word. We got into the studio and he gave us more than we could have imagined,” she acknowledged.

The track is the singer’s latest since the release of ‘Omo Rapala’ last January. On Fantasy, the singer delivers her usual crisp vocals atop a pulsating beat and smooth saxophone riffs from Kuti. It’s an infectious song through and through, and the two make for a memorable duo. Prior to the song release days back, Niniola took to the social sphere to share a story about performing with Femi Kuti some years ago.
She reflected on what it means to now have her very own song with the celebrated Nigerian musician. “Two years ago, I was on his stage performing, Baba came up to join me and today I have a song with him…LEGEND@femiakuti. Thank you so much for agreeing to do this song with me, without listening to the song you came to the studio and killed it… Thank you so much sir,” the seductive vocal artiste tweeted.

Since participating in the sixth season of Project Fame West Africa in 2013, where she finished third runner-up, Niniola, after releasing her debut single Ibadi, has had a remarkable path. According to a new profile on the artiste in Rolling Stone, she’s also been working with the hit-making American producer Timbaland, who has long expressed being a fan of her music. “I’m glad I can be comfortable as an African and sing in my language,” Niniola tells Rolling Stone online magazine. “When I drop songs, I drop hit songs,” she adds.

Niniola’s sophomore album is due later this year, the follow-up to her 2017’s This is Me, which produced the hit song Maradona. Through massive singles like Maradona and Bana and her debut standout album This Is Me, the singer has taken the throne as the leading artiste pushing a blend of afro-pop and house music. She has continued that upward trend with more recent drops like Boda Sodiq and Designer.

Her lyrics are lewdly coded if you listen to her exploiting the Yoruba language to sing. She subtly admits the Yoruba language makes her song’s delivery beautiful. Niniola is regarded as one of Nigeria’s most successful female musicians. Hits such as Maradona and Boda Sodiq have won her glowing endorsements from big international stars like Drake.

Beyoncé also caught the Niniola wave by borrowing from Maradona to compose ‘Find Your Way Back’ off the Grammy-nominated project The Lion King. That Beyoncé’s 2019 album The Gift, a companion to her soundtrack to The Lion King, finds sturdy footing on its fourth track. “Find Your Way Back” is supported by the graceful thrum of Niniola’s Maradona, an indelible house music single released early in 2017.

This nod marked the latest jump in global exposure for Niniola, a singer who has gradually built an international profile since Maradona became a multi-country hit three years ago. Her latest release, “Fantasy,” came out on Thursday, February 27, 2020; a wiry collaboration driven by pinprick guitar, jolts of brass, and pattering hand-drums. “I don’t know why I’m working with these legends now,” Niniola says happily.

It’s a long way from where she started. She took to music early, absorbing her parents’ record collection. In secondary school, she started entertaining her friends during lunchtime: “I had a sort of request show where my friends would request songs and I would sing,” Niniola recalls. “I thought to myself, ‘I’m a star!’”

But not everyone felt the same. When she started to audition for televised talent shows in Nigeria, she faced a string of rejections. “I got my fair share of, ‘No, you’re not good enough,’” Niniola says. “I remember a particular incident where I went for an audition at West African Idol, the Lagos edition. I got one yes from a judge but two no’s, so I couldn’t move on to the next level. I got on a plane and went to Abuja. I went to audition, but I was told that I couldn’t. I cried, told them I came all the way from Lagos. At the end of the day I was picked but then dropped.”

Niniola temporarily stopped doing music, dispirited by all the rejections. She was jarred back into action by her brother, who called and told her that X Factor was holding auditions in Nigeria; Niniola tried out but fell short once again. She allowed herself one final opportunity, deciding that if she was not picked, then music is not for her. She made it on to Project Fame West Africa and finished fourth.
With prize money from the show in hand, Niniola sought out a collaborator who could help turn a TV performance into a career. That turned out to be Sarz, a gifted beat maker who has worked with stars like Wizkid and Wande Coal. Niniola learned about him by googling “Top Ten Nigerian music producers.”

“We had a meeting in the studio, and the minute I walked in, I told him I want a hit song,” Niniola says. “He laughed at me ‘You haven’t even released any songs!’ I just said, “It has to be worth my money.” And it was. In contrast to the early wave of rejections from talent-show judges, listeners took to Niniola’s debut single quickly. “Ibadi” was supple but pushy, a dance-floor-ready barrage of percussion shrouded in Niniola’s vocal lines, which she delivered in both English and Yoruba. After releasing the track, Niniola didn’t have enough money to make a video for months, but even that setback didn’t hamper “Ibadi,” which became a hit around Nigeria.

That was partially due to Niniola’s sound. While many of her peers in the Nigerian mainstream were cohering around the easy, charming bounce dubbed Afrobeats, Niniola was more connected to the four-on-the-floor thump of house music – so connected, in fact, that she has taken on the mantle of “the Queen of Afro House.” “I wanted the kind of beat that would give me freedom to sing,” she said.